I am going to do something different today and start with my conclusion and work somewhat backwards. The bull market remains intact and fresh all-time highs should be seen next quarter. Buying into sharp downdrafts, while emotionally very difficult, should be rewarded over the intermediate-term.

Like a snowball rolling downhill, whatever this decline is going to end up being labeled, the market is right in the middle of the highest speed and maximum acceleration. As with the snowball, it is the largest and fastest right before it hits the bottom of the hill.

If Friday wasn’t volatile enough for you, Monday was a wild one in terms of points not percent. And that’s leading to what looks to be an equally or even more volatile affair on Tuesday as opening indications have ranged from the Dow being down anywhere from 400 to 950 points. In point terms, it’s going to be a day for the ages. However in percentage terms, Tuesday will likely fall within the realm of normalcy for a market decline.

This next comment may seem counterintuitive, but the best thing for stocks would be a 1000+ point decline at the open that creates the “whoosh” of cleaning out everyone and anyone looking to sell. From there, the market would then have an opportunity to back and fill and begin to create some stability. If that “whoosh” doesn’t happen at the open, there should be several selling waves during the day to create it with the potential for a Turnaround Tuesday this afternoon. The media would absolutely love it. The worst thing for stocks would be if stocks open sharply higher.

Yesterday, I wrote about my playbook for mini crashes. http://investfortomorrowblog.com/archives/3313 The pattern and most likely scenario remains very much in play and valid although I certainly underestimated to magnitude of the decline. As I mentioned yesterday, I am looking for the momentum or internal low in the stock market this week followed by a multi-week rally before the next decline to the ultimate bottom takes places.

If the market cooperates, that puts the final low sometime in March. There are enough “ifs” and time in that scenario to take it day by day and week by week. One thing continues unabated, volatility, my theme for 2018. Historically average volatility is here to stay with pockets of spikes.

Investors and the media have this fascination with needing to know why the decline occurred. What caused it? How can we prevent it from happening again? Most of the time, that’s a fool’s errand.

What we are seeing right now is financial market event. It is not fundamentally based and is absolutely nothing like 2008, which people have invoke during every single large decline since 2008. There is no underlying financial crisis. The economy is not teetering on recession, at least not yet. We have record corporate earnings and the global economy is sound, again, for now.

At the risk of creating some undue anxiety, 1987 was a market event. It had nothing to do with the economy or financial system. I do not believe this is 1987 again. I repeat. I do not believe this is 1987 again, at least  not right now. I do think something like 1987 on a smaller scale could occur much later this year, but that’s a topic for a different day.

This stock market decline began with the specter of higher interest rates, or at least that’s what the pundits have said. It took the 10 year treasury note to rally 100% before stocks noticed or so it seems. Last Friday, wage growth finally got back to normal levels, if only for one month. This has investors worried that a tight labor market with rising wages could lead to inflation, something we haven’t had in over a decade. And with inflation comes a very restrictive Fed with spiking short-term interest rates.

I laugh at that entire thesis. Certainly since 2009, the Fed has been desperately trying (and failing) to engineer inflation. The inflation isn’t even out of the bottle yet and people are worried. Looking at the long-term picture, since 1998 the velocity of money, something I write about every 6 weeks right before the Fed meets, has been in a perfect, secular bear market. I continue to argue that until velocity turns significantly higher, there will be no problematic or worrisome inflation.

Another reason behind the selling has been computerized trading, as it behind every single accelerating decline. That’s a sign of the times and one of the unintended consequences of technology. People don’t complain about high speed trading on the way up, only on the way down. If I had my druthers, I would slow down all computerized trading by 1/2 of one second. Playing field leveled. Edge removed.

Look at the chart below, especially in the middle, of what transpired over just two hours on Tuesday. 1300 Dow points from high to low. 600 Dow points in just 5 min, in both directions. 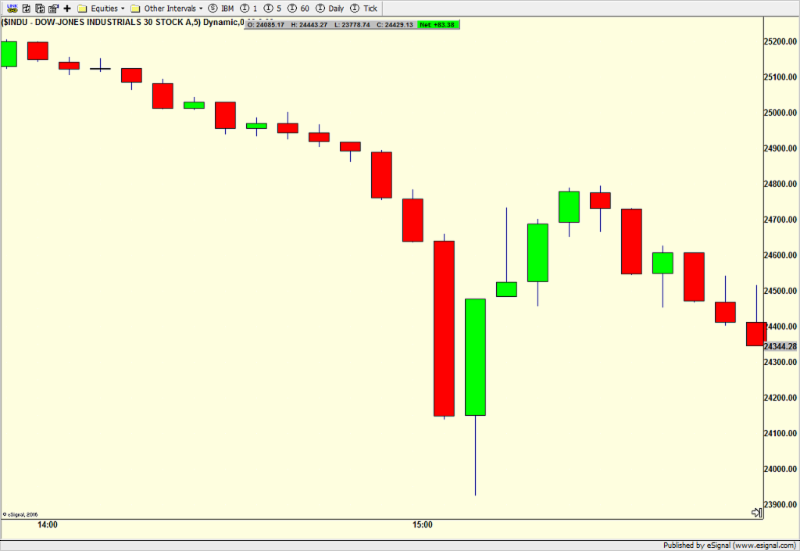 Finally, as with almost every decline, there are those out there who made overly leveraged (borrowed money) bets and who are at risk of insolvency. In today’s case, what started as tens of millions and then hundreds of millions and billions and tens of billions, betting against stock market volatility became akin to shooting fish in a barrel, until it wasn’t. Volatility happens all at once. It doesn’t quickly and methodically build.

There are derivative products who trade the volatility index or VIX, both with and against. Those that bet against volatility have blown up. completely. So much, that at least one product creator, Credit Suisse, is liquidating its XIV exchange traded note (ETN). XIV closed on Monday at 99. Now it’s been halted from trading and will be closed, literally overnight.

There are always casualties during periods of market stress. Leverage used properly can aid in portfolio construction. Leverage used without understanding the product and consequences is greedy and ignorant.

Assuming Tuesday is another wild day, (Turnaround Tuesday?), I will send a short update or a full canaries in the coal mine later this week.

As always, please don’t hesitate to call or email with any specific questions about your portfolio or financial situation. Investing is a marathon not a sprint and pockets of weakness in the markets will always occur, whichever side of the market you are on