As you know, I offered my full Top 15 Financial Resolutions for 2021 on Fox61 last week and I actually sped through the entire list. Over the weekend I made a video of that list and went into more detail on each of the resolutions. Here it is below.

Since Friday’s blog post, there is nothing that has changed any of my thinking regarding the markets. Stocks look like they will open down by roughly 1% today. Frankly, after such a huge run, it should have been much more. However, there are still people clamoring to get in so it is going to take more than threats of impeachment and bans from social media to put any real downward pressure on the market.

As negative as the geopolitical news remains, the markets simply do not care. Everything that is going on is being viewed as short-term and 100% non-impactful to economic growth nor corporate earnings.

The single most important thing to watch in the financial markets is the U.S. dollar which has completely collapsed since its peak in March. That is not new news and something I have written about before. The dollar is a usually a safe haven during times of crisis like we saw in March. However, with all the stimulus, borrowing and surging mountain of national debt, the dollar is viewed as less valuable when compared to its competitors, especially the Chinese Yuan.

Take a look at the chart below where I have arrows showing small rallies in the dollar. Both of those recent occurrences coincided with stocks pulling back 5-10%. If and when the dollar sees another rally for more than a day or two, I would expect stocks to pull back again in the single digit range. 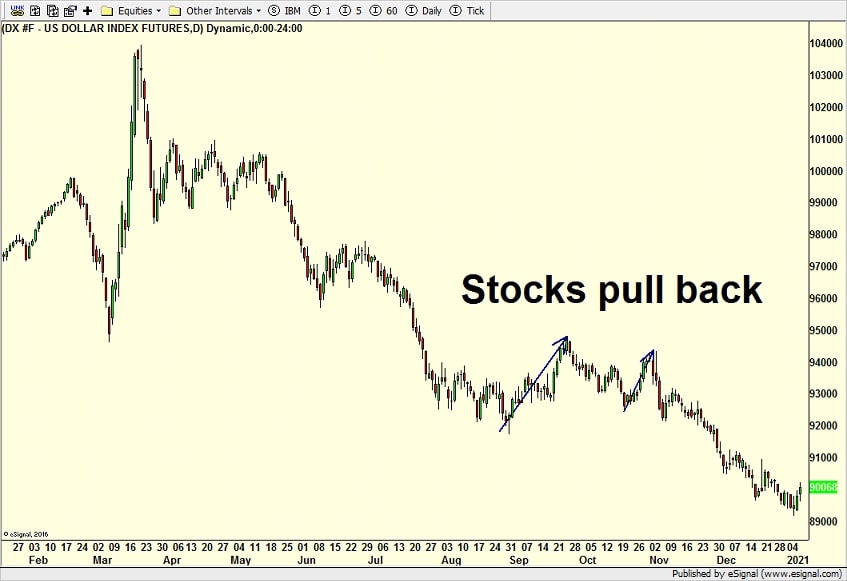