Another Wrong for Me

Besides misreading the research, my personal electoral opinion was wrong which was not based on research and cold, hard facts.In that email as well as in a subsequent article it just didn’t seem plausible for Trump to win the necessary 270 electoral votes. I said he absolutely needed Florida, North Carolina, Arizona and Ohio which had correctly predicted the last 13 presidential contests. Sweeping those four had a 6% chance of occurring. And even then, he would need to turn one blue state red. None of those blue states appeared that close coming into Election Day.

There is a reason we manage portfolios based on non-emotional, time and battle-tested quantitative models. It’s not because they are infallible; they certainly have their weak moments. It’s because opinions can ebb and flow based on the landscape. Emotional investing tends to buy near peaks and sell near lows. Markets don’t care about my opinions nor editorials. There is no foundational way to assess risk based what I think should happen. And that’s why my opinion on Trump’s path to 270 was wrong along with that of so many others.

Getting back to the election, if you followed me on Twitter during election night, it was fascinating to watch the overnight trading session reach historic levels of volatility. When early Florida returns came in, the S&P 500 quickly jumped almost 1% by 8 pm. Shortly thereafter, the results began to turn to Trump in traditionally blue counties.

Then, we saw a mini-crash or flash crash or free fall as the Dow was down 800 points and circuit breakers kicked in to prevent any further decline. It was ugly, but I wondered at the time if we were just seeing computers trade with computers.

And just as it looked like everything would become unglued when stocks opened on the 9th, bargain hunters stepped up and surely and steadily pushed stocks back up right to the NYSE opening. From there, the bulls overwhelmed the bears in a very volatile session. 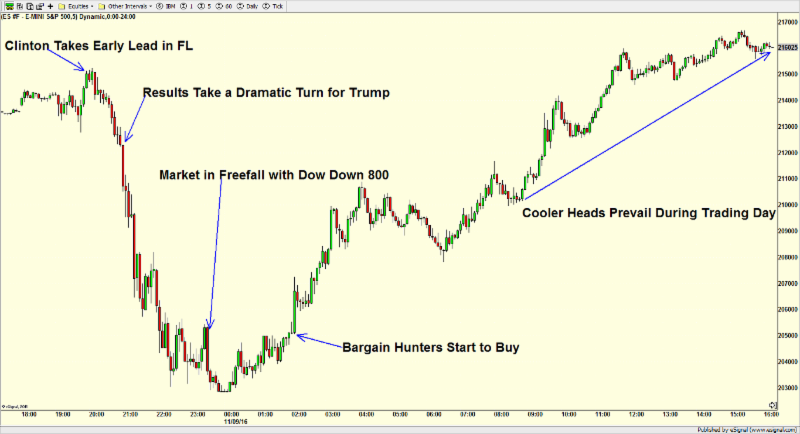