Since late July I have been in the camp looking for a trading range with a mild/modest pullback. I remain of that opinion today. Should stocks gather themselves and score fresh new highs this month, I think it will be a good opportunity for the  nimble  to sell for a modest move lower into October. All along, I have written about a mid single digit pullback and that’s still my target. I do not believe we will see a 10%+ decline and certainly, the bull market is not over.
I am not going to rehash my rationale for why a trading range/pullback and why so modest right here, but I do want to add color to a previous concern, the banks. As you know, the banks/financials are one of my four key sectors to a bull market’s health. The others being semiconductors, consumer discretionary and transports.
Remember that the banks peaked in February 2007, long before the stock market did in October as you can see below. A 2 1/2 year, 50%+ debacle followed suit. 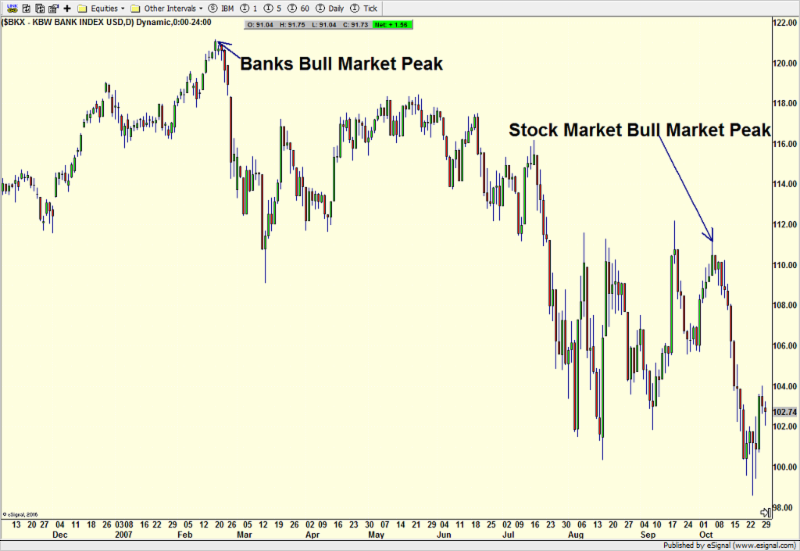 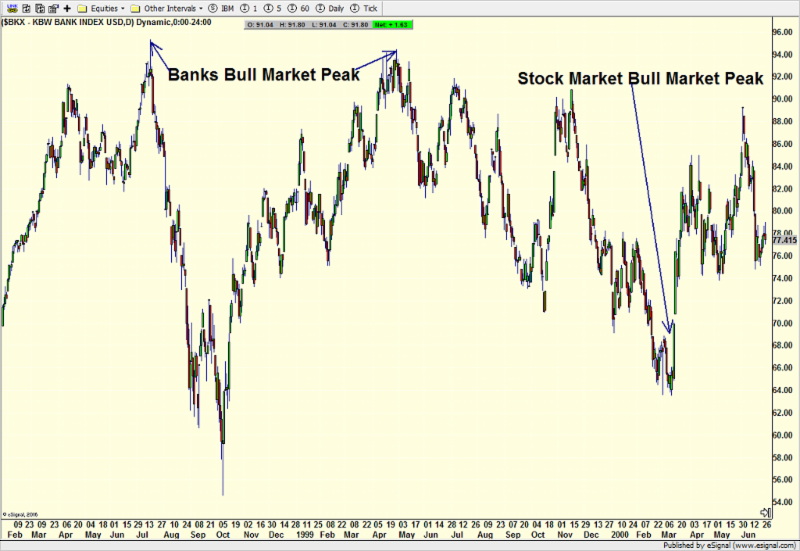 Last week, the banks were at their lowest level in three months while the S&P 500 was one good day from all-time highs. That’s not exactly healthy behavior and can lead to some kind of trouble for stocks. Additionally, the banks had also sunk below their long-term trend, more popularly know as the average price of the last 200 days (200 day moving average). However, let’s also remember that not all poor behavior by the banks leads to a 50% or even a 20% stock market decline.
As the new week began and Hurricane Irma’s ferocity did not cause the damage expected and certainly not the worst case scenario, stocks opened with a relief rally that ended up powering higher all day. The banks were a leader. This morning, as I type this, banks are once again leading and have rallied right back to the pink line or their long-term trend, giving a sigh of relief to the bulls. You can see that important chart below.
However, nothing has changed fundamentally, not a single thing, or really technically for that matter. And the Fed is still slated to announce their balance sheet taper plan next week with the likelihood of one more rate hike in December. Bank earnings are unlikely to accelerate from here. The economy’s output has improved as I have been writing about all year, but a recession still looms in President Trump’s term.

The three month low does not look the a low of significance or not the ultimate bottom. It appears to be just a spot for a bounce before moving lower. It will be interesting to see how price behaves now that it has bounced. Bulls really want to see the group close above the pink line below (long-term trend) for a week straight. Failure to do so will likely result in the pink line beginning to trend down with price beneath it. That’s a bad set up. Also, the price lows for 2017 are at the blue line, another line in the sand the keep a close eye on.
The final area of the chart above I want to point out is the far right side where I have red and green lines with question marks. I am being the master of the obvious to say the banks can go in either direction, but I really do think there is a binary outcome from here although it isn’t likely to be in straight line fashion. I just don’t see the sector staying in that trading range. It’s either going to breakout to the upside or breakdown. The next few days and weeks are likely key although a massive breakout of significance will oftentimes begin as a fake out in the opposite direction first.