Bears Feeling Their Oats This Morning – Enjoy It Now

Looks like we have an ugly opening ahead this morning to begin the weakest week in the weakest month. I did a video yesterday on this and the prospects for higher income and capital gains taxes. You can access it HERE.

I always find it interesting how many people email questions and comments when I post new blogs, but especially new videos. This video has already created email inbox buzz. I am guessing the other emails in my inbox might be a little jealous.

It’s no secret that September is the weakest month of the year. And the next 5 days are the weakest week of September. This study is all over the internet and media. There is nothing super special that I can add. You can watch the video for a quick tidbit I picked up from my friend, Rob Hanna of Quantifiable Edges, on how this week shapes up if stocks are already in decline coming in.

The chart of S&P 500 is below. As I mentioned last week and in the video, I have been looking for the stock market to make one more move lower and then attempt to reverse. We should see that move lower this morning. I don’t think the attempt to reverse comes today, but we shall see.

The most likely path takes the S&P 500 below the top, horizontal blue line today. That should flush out a bunch of weak-handed holders for possible low tomorrow. I still believe we see fresh, all-time highs in Q4. Also, the media has been making a big deal about the pink line which is just the average price of the last 50 days. Just because the market has bounced off it the past few times, somehow the media thinks it’s a way to trade. That’s a dangerous notion. 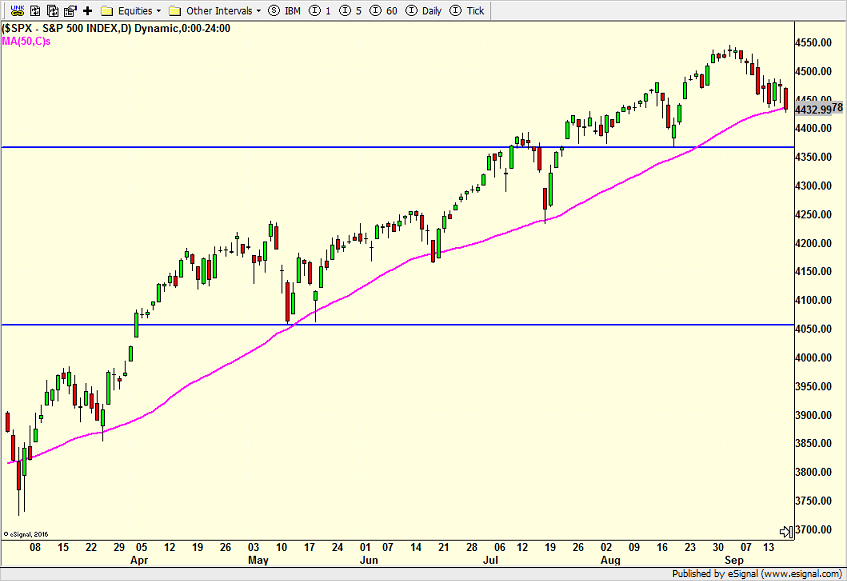 Chinese real estate company, Evergrande, has been in the media but is really front and center today as it’s on the verge of collapse under a mountain a several hundred billion in debt. I hear pundits wondering about global contagion a la Lehman. I don’t buy it. First, the Chinese Communist Party can bail them if they want to. Second, the wealthiest man in China is heavily long. Third, I do not believe U.S. banks have any direct exposure here. And even if I am somehow wrong, our banks are well over-capitalized. They are in the best capital position of all-time. Evergrande seems like one of those watershed events on the surface, but on the surface is about all I see.

Again, the bull market remains alive and new highs should be seen in Q4. By the open, the pullback should reach about 4%. We haven’t had a 5% decline since October 2020. Although I did not think we would see that in September, the odds favor that right here. I am a buyer, especially if today is one of those puke days and Tuesday opens red.

I raised some cash late last week by selling my S&P 500 position and selling half of my energy position for the third time this month to a now minimum size position. I plan to redeploy those assets before long.