Bears Left in the Dust

While I did not see the magnitude of the January decline, I did call the January bottom in real time as the internal or momentum low. From there, I saw a reflex rally for a few weeks that would be followed by another decline to revisit or retest the same levels seen in January before a much better, stronger and more long-lasting could begin. While the bears screamed about further collapse and bought more bottled water and canned goods, I explained that the evidence did not support such a claim.

At both the January and February lows, various sentiment indicators were at a negative extreme seen mostly at significant bottoms, meaning that people had become so bearish, a rally was about to begin. After the rally began in January we saw a truly historic thrust off the bottom in the volume in the number of stocks advancing and declining, however, recent results were not as strong as older ones. You can read the post here. http://investfortomorrowblog.com/archives/2123

At the February bottom, I offered some upside price targets and lines in the sand based on some fairly simple technical measures. I also said that solid confirmation of the bottom call I made at February lows would come on a close above 1947 on the S&P 500. http://investfortomorrowblog.com/archives/2136

With everything coming together rather nicely, let’s take a look at the S&P 500, Dow Industrials and S&P 400 below. With all three indices closing above their bullish lines in the sand, the rally has been confirmed which has been talked about a lot in the media as the time to buy. For our strategies, I much prefer to buy closer to the bottom where the risk/reward ratio is more positively skewed, knowing full well that volatility would be high.

So far so good as all of the major indices are in gear to the upside and have rallied significantly from the February bottom on the way to my initial price target next quarter. For the time being, I will remain positive unless price closes back below the bullish line in the sand. 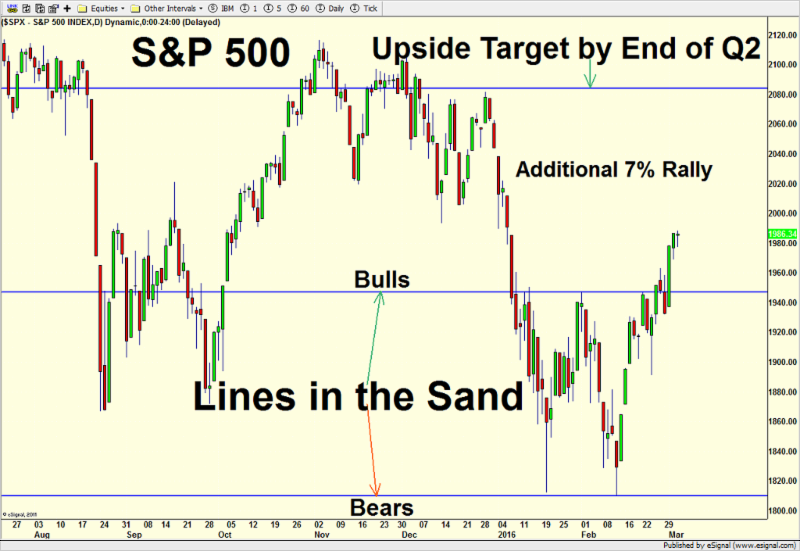 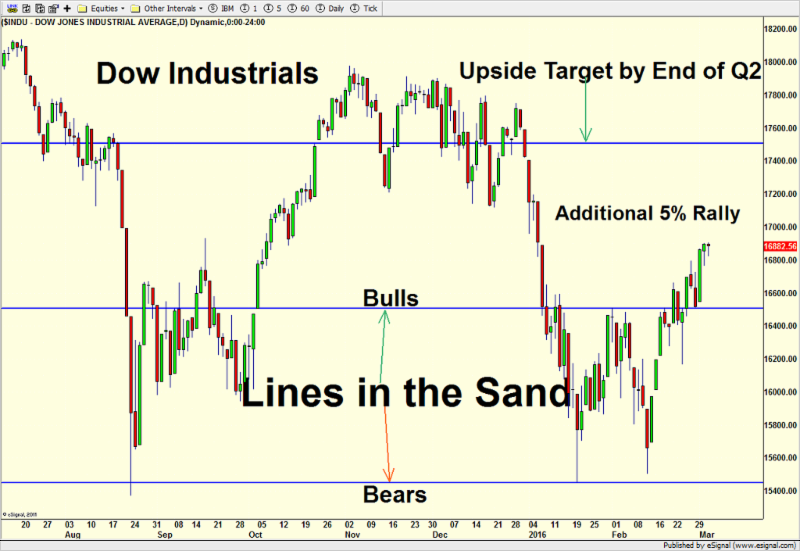 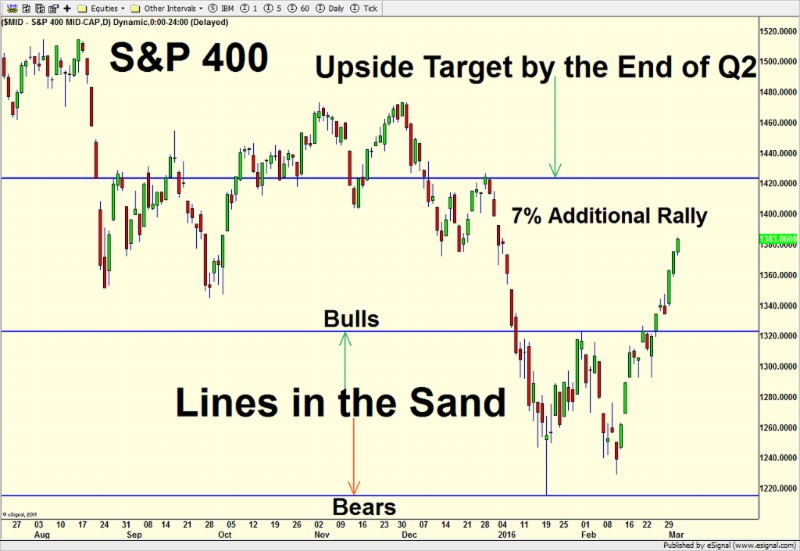 Price action over the past few weeks has seen the bulls press and press and press the upside. Three times, stocks have become short-term overbought, including right now, only to see a two day pullback at most before the bulls went back to work. Historically, that indicates strong buying pressure which isn’t exhausted so quickly. Strength begets strength.

This rally isn’t about the Fed or China or Iran or even the election. As has been the case since last year, oil prices have been the primary driver and they are up almost 40% since the low. Lately, it’s beginning to look like stocks are dragging oil up rather than vice versa and that’s a healthy sign longer-term if it holds.

Additionally, many of my previous concerns have been put to rest. All four of my key sectors are now in gear to the upside as the banks have caught fire this week to join the semis, discretionary and transports. Industrials, materials, REITs and even energy have also kicked it into high gear. Previous leaders, staples, utilities and telecom have all held their own.

Even the decimated high yield bond sector has joined the party in a big way of late and I am really pleased that our High Yield Plus strategy got on board early in the game. Emerging markets, left for dead with junk bonds and energy, have suddenly caught fire. This is yet another rally that has trapped the masses off guard and unprepared. And it’s not over just yet although a quick pullback would not be a bad thing.

If your portfolio is not performing as you expected or you would like a fresh set of eyes to analyze it, please contact me directly by calling the office at 203.389.3553.