Bulls and Santa Claus Making a Stand. One Indicator for the All Clear

December has already set all kinds of precedents going back to the 1800s, including depth of decline, speed of decline, length of decline and intensity of decline. Remember, stocks just don’t decline all that often in December, ESPECIALLY during a mid-term election year where Q4 and December has almost always been like shooting fish in a barrel. I had to go all the way back to 1931 to find anything remotely similar, but let’s face it, price analogs that old don’t have a lot of relevance.

After seeing the single worst pre-Christmas trading day and pre-Christmas trading week, the stock market put in a rather dramatic low during the morning of the 26th when supposedly “no one” was working. It reminded me somewhat of November 25th, 2011 when stocks were selling off hard after a what turned out to be a major bottom a month earlier. November 25th, you see, was one of the holiday-shortened half trading days when “no one” was working.

Anyway, the day after Christmas, Santa Claus certainly came a calling as stocks rocketed roughly 4% with the Dow Industrials soaring more than 1000 points. While that gave investors lots of cheer it only retraced two days of the selling wave since the December 3rd peak.

As I have written about repeatedly, the post-December 3rd selling wave set all kinds of precedents and saw countless indicators, relationships and models all fail in glorious fashion. The absolute worst case for stocks was that they were “supposed” to bottom on December 10th.

Trading behavior on December 26th set a number of positive precedents of its own along with triggering a wide array of indicators, relationships and models which say that the internal or momentum low has been set and the market would next begin the bottoming process again.

Let’s talk about some of these indicators.

Of the 505 stocks in the S&P 500 (I know. Shouldn’t it be just 500?), 504 went up on the 26th. Only Newmont Mining, a gold stock, declined. That kind of dramatic and overwhelming action is among the most lopsided in history and appears in and around significant stock market bottoms.

More than 90% of the volume on the 26th was in stocks that advanced. Depending on your data source, that number was likely around 95%. Powerful action like that is also seen during the bottoming process as stocks either initially surge from a low and blast off from a secondary bottom.

No matter which put/call option ratio I look at, they all point to excessive pessimism at the low on the 24th. You can see the CBOE one below. The masses loading up for further weakness. 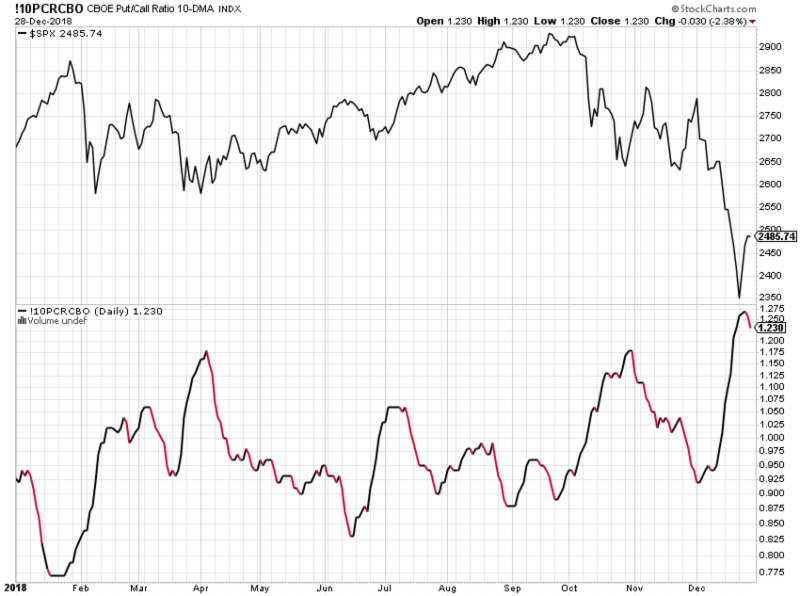 As with the various put/call ratios, most sentiment surveys showed an excessive amount of negativity among investors into Christmas week. Below you can see the American Association of Individual Investors. More than 50% were negative which is a number often seen in and around significant price lows. 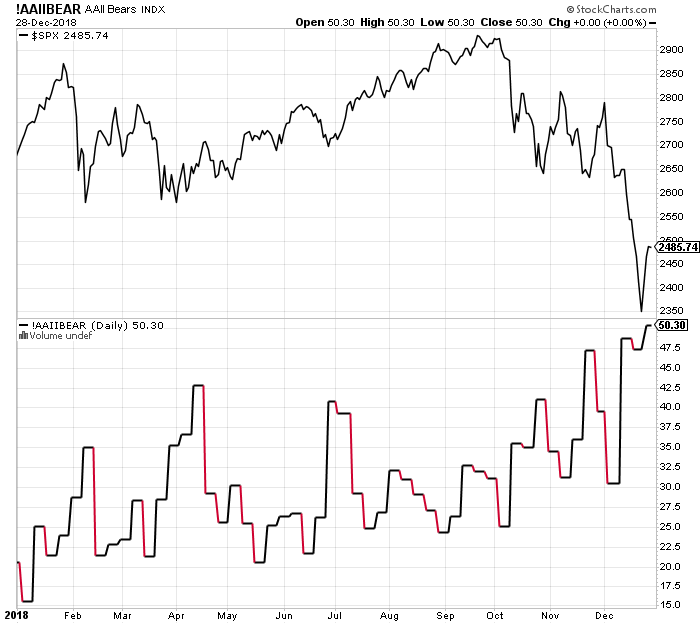 Turning to the percentage of stocks in uptrends or bull markets, I elongated the chart below so you could see the entire bull market. You will notice that at every low of the bull market, even during the “mini bear markets”, less than 15% of stocks on the New York Stock Exchange were in uptrends. That same condition was met last week. It is worth noting that during the financial crisis, that number was around 5%. 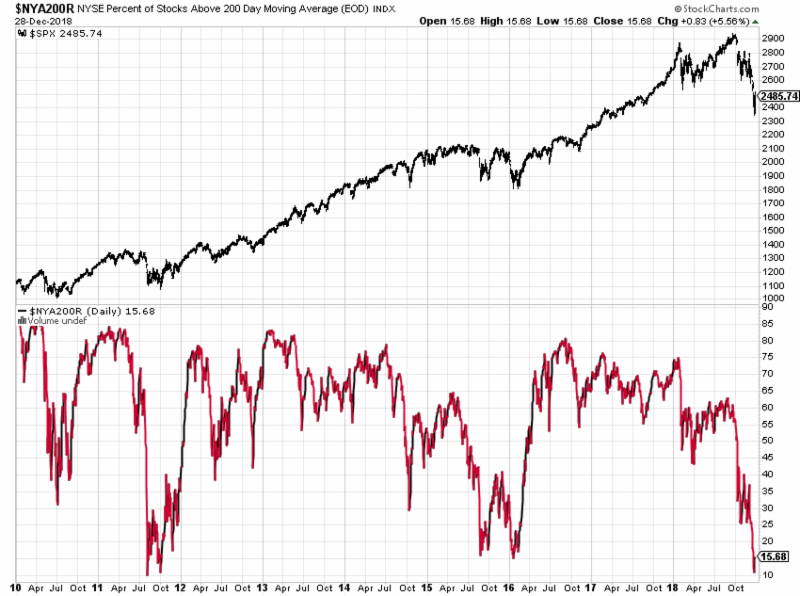 The Investment Company Institute reported that investors pulled more than $46 billion from mutual funds through the 19th. I expect that number to jump even more when data are reported this week. Although you have to take money flows in December with a small grain of salt, $46 billion is absolutely massive and was only seen during the financial crisis.

This tells us what every other item I mentioned already has; investors are in panic mode. Behavior like this doesn’t guarantee the bottom, but it does say that the vast majority of the damage has already been done. It says nothing about volatility or the complexity of the bottom forming or when the recovery will be complete.

In today’s case, a “V” type bottom where stocks just rally from here unabated to their ultimate peak is the less likely and less preferred scenario. That price action would have be more indicative of an ongoing bear market. Instead, the more preferred and likely scenario would be for a complex low that forms during Q1 and leads to sharply higher prices in Q2 and Q3.

Finally, someone always asks if there is any indicator they should watch to signal an “all clear”. Below is the Volatility Index, more popularly known as the VIX. The VIX always spikes higher into stock market bottoms. “Higher” is relative which is why I included the whole year. If you just looked at Q4, the spike looks really high. Showing the February spike as volatility products imploded gives a whole different perspective to a spike. 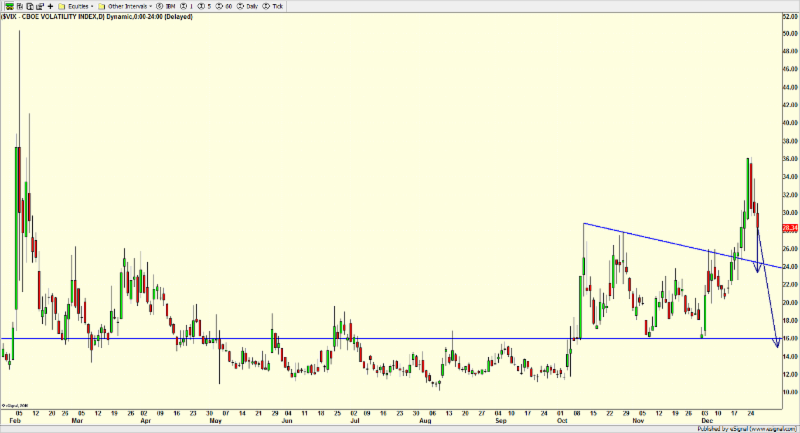 All the way on the far right of the chart you can see two arrows drawn in. The first and little one shows you where the VIX potentially declines back into its previous trading range. That would be the first confirmation sign of a low and momentum peak. The second arrow points to the VIX closing below 16 which would signal a return to normalcy. Keep an eye on both levels.