Calling THE Bottom and the Bear Market that Lies Ahead

Before I dive in headfirst I want to start by saying that there are more bold and brash comments in this update, especially after the charts, than any piece I have written in a very long time. None of it is political.
Here is a taste and I respectfully ask you to read this update to the end. It spells out some very detailed scenarios for the bull market and impending bear market.
Let me state this very emphatically. If THE bottom is in and stocks go right back to new highs from here, I think the 10 year bull market will end in Q1 of 2019 and begin a massive decline into 2020. I want to be clear and on the record.
Since before I called for stocks to decline mid to upper single digits in October, I said the bull market remains old and wrinkly but still alive. After the 10%+ correction during Q1 of this year, I emphatically pounded the table at every juncture that the bull market was absolutely not over. From Q1’s depths of despair near 23,000, I had no problem stating my strong conviction on CNBC, FBN and Yahoo.
While the January peak looked a whole lot better than the Q3 peak in stocks, I still do not believe the bull is over. The process may have begun for a bear market down the road, but I don’t think it started in October 2018 like the last one did in 2007. I will plead my case next week when I write Canaries in the Coal Mine from 30,000 feet on American Airlines.
Bull markets typically do not end with a bang like the decline we are currently seeing. Bull markets tend to roll and roll and roll with the market losing an important element each time. Bull market peaks are certainly not a single point in time. And bear markets do not initiate while the media has special reports on the end of the bull market.
Given all that, let’s face it; there has been a lot of damage done during this decline. It hasn’t been this ugly since the Q3 2015 / Q1 2016 correction and that really was a complex, 6 month affair to repair and recover. And before that, you have to go back to Q3 2011 for a decline with this much downside momentum and damage.
You can see the McClellan Summation Index below which is a long-term measure of internal market health based on the number of stocks going up and down. It is below -700. That reflects serious and strong internal damage. 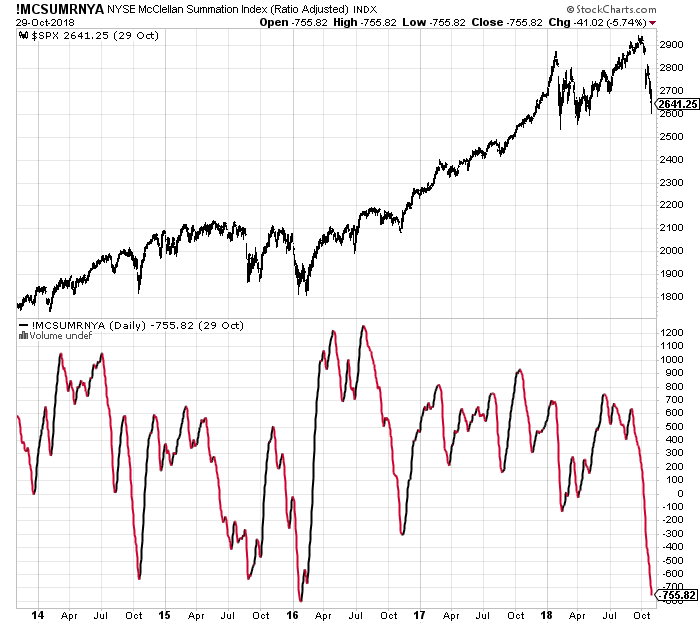 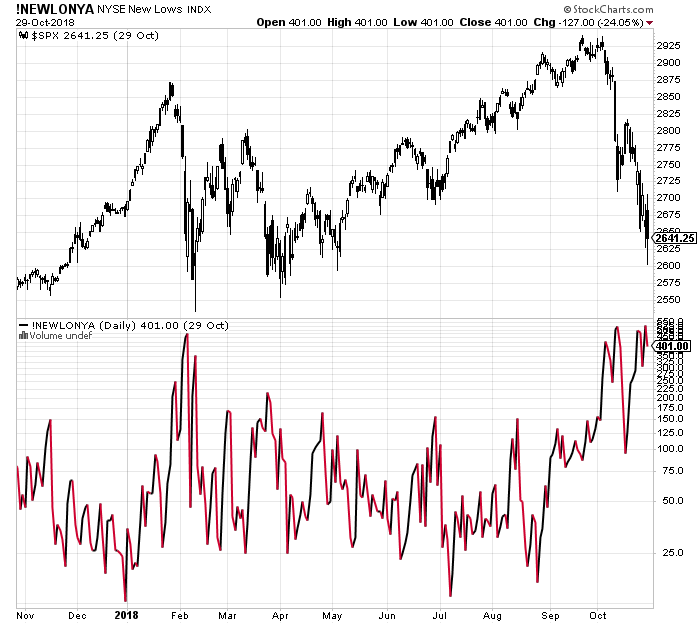 The percentage of stocks in a bull market has corrected to 25% as you can see below in red. That needs to show big improvement. 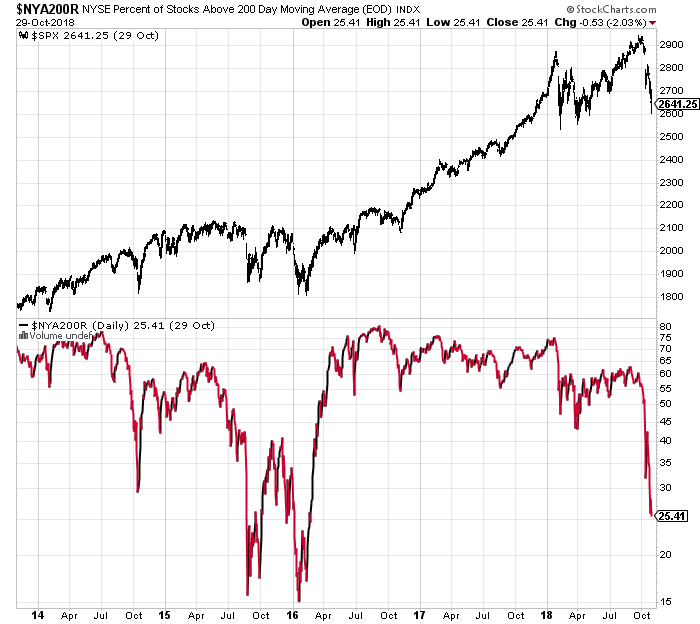 At this point, essentially all of the major stock market indices are in downtrends. My four key leadership sectors, banks, semis, consumer discretionary and transports have been hit hard and badly damaged. Usually, damage like this takes time to repair either by going sideways or rallying and declining in a range.
On the flip side, besides what I discussed yesterday in the very short-term, the percentage of stocks above their average price of the last 50 days is washed out. I would like to see the next decline show this number improving. 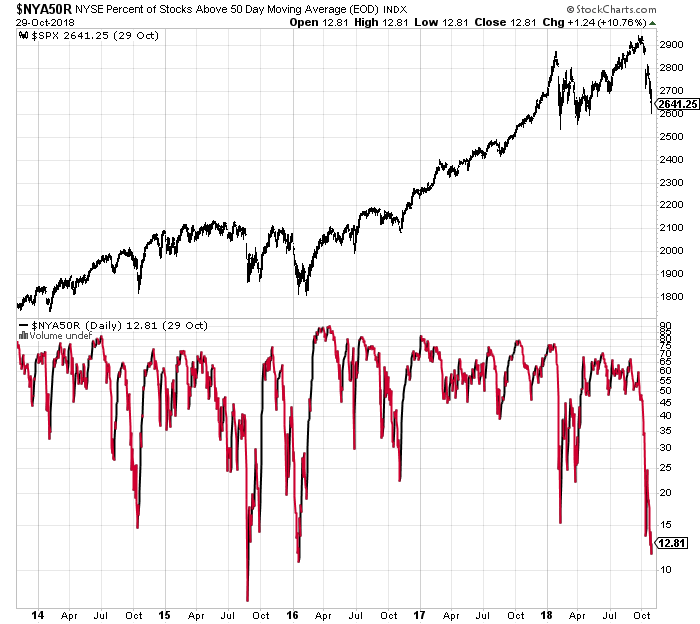 From a sentiment standpoint, I could probably name a dozen indicators which are now showing widespread fear and panic. However, as we know, they can always get worse. Below you can see how option traders are behaving over the last 10 days. They are in full blown panic and trying to position for more weakness. 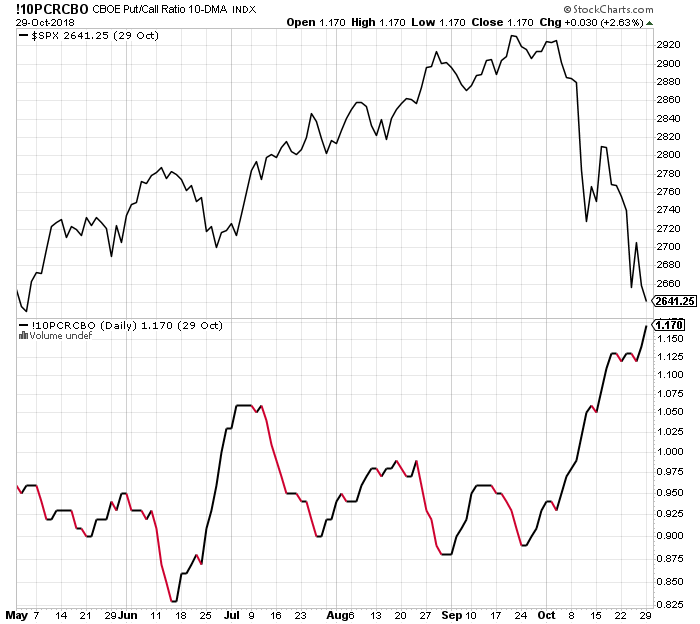 Let me state this very emphatically. If THE bottom is in and stocks go right back to new highs from here, I think the 10 year bull market will end in Q1 of 2019 and begin a massive decline into 2020. I want to be clear and on the record.
However, I do not see this scenario as being a likely one, but it is possible.
Rather, I think this current nascent rally will peter out sooner than later with another decline on much lower downside momentum coming. The ultimate low should be somewhere between Dow 24,300 and 23,800. From there, I continue to see my next upside target hit of Dow 27,000. While I originally thought it would be in December or January, I may have to push that out into Q1. It’s just too early for me to opine.
I have not updated the chart below but you can still see what I view as the most likely scenario. 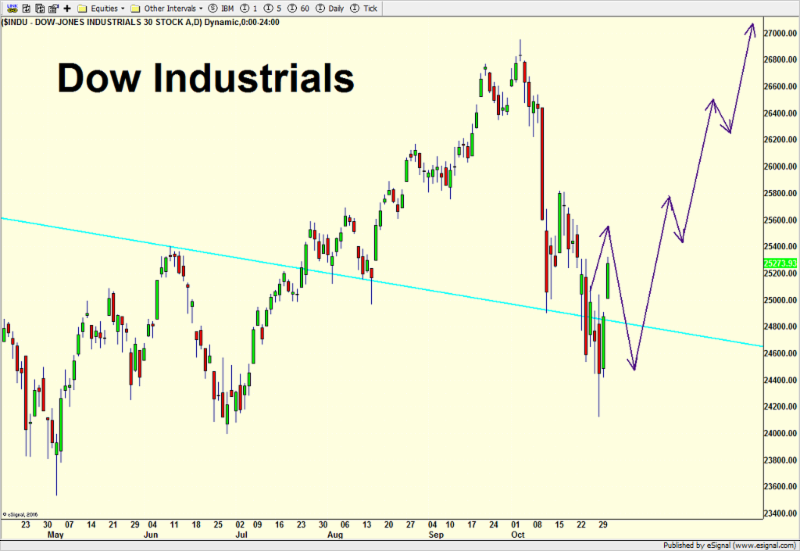 Stocks have priced in a House victory by the Democrats and a relentless Fed along with the Trump tariff tantrum ending poorly with China. A change on any of those fronts would certainly be a boon for stocks. I am not predicting it, just stating it.
Q4 is typically very strong for stocks. This year, there is the added very strong tailwind of being post-mid-term elections. In the entire four year cycle for stocks, the single most positive period is right now through April. Simply put, once this correction ends, stocks could not be in a better position to rally sharply and significantly.
I know. That’s a pretty bold statement.
Like the Fed does with data, I will follow the indicators and models. They are not infallible. And on that topic, I received a number of emails asking me how I will know if I am wrong and what will I do if I am wrong. Well friends, being wrong is nothing new for me. It happens all the time. When you are as bold and brash as I am, you can’t be afraid to be wrong. I swing at an awful lot of pitches.
To answer the question, if the market does not respond to the time-tested conditions that have led to certain things happening, something is wrong and I will report it. If I am looking for a rally and stocks roll over, I will be wrong. Egg on my face an all, although I have acquired the skill of washing my face fairly well after the egg. In the big picture if price action remains below its short, intermediate and long-term trends for a week straight, that can be confirmation of a new bear.