Several months ago, I wrote back to back articles about the Dow Theory trend change. You can view them below.
http://www.investfortomorrow.com/newsletter/CurrentStreet$marts20141029.pdf

Simply put, this analysis holds that the Dow Jones Industrials and Transports should move in lock step to confirm each intermediate-term move in the stock market. When one index see a relative new high, so should the other. The opposite is true at lows. When one index diverges from the other, it is a possible sign of a trend change. When both indices closes below a previous significant low that is considered confirmed change of trend.

Let’s look at the two charts below for some real life, recent examples. At the far lower left of both charts you can see the Ebola October lows where both indices closed below previous significant lows. By early December, they both went right back to new highs where the party began to fizzle.

Since early December, the transports have seen a progression of peaks that were each lower than the previous one where the industrials saw a clear trend of higher highs through February. With one index lagging the other, this is called a non-confirmation or divergence and warns that all is not perfect healthy. Of course, if and when the lagging index rallies to confirm the leader, this Dow Theory warning completely goes away. Right now, we have a series of caution flags since late 2014 without much in the way of price weakness. 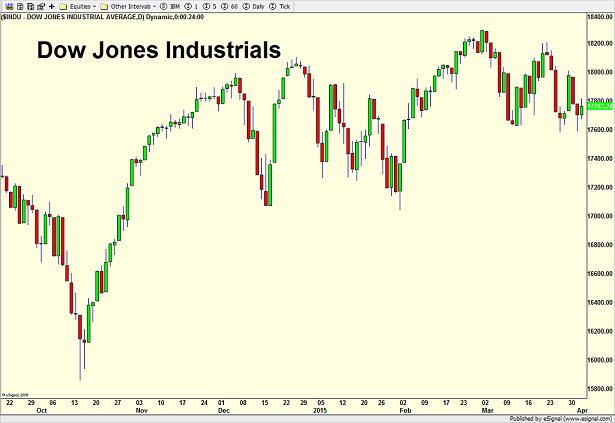 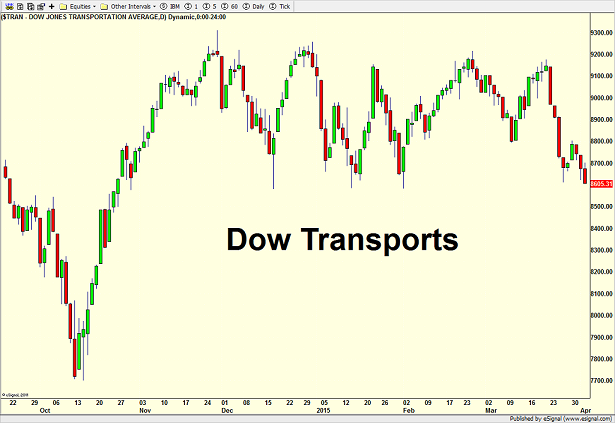 Beyond the Dow Theory non-confirmation discussed above, the more serious warning is the Dow Theory trend change. This occurs when both indices close below previous significant or above previous significant highs. On the left side of the chart in October, both indices saw Dow Theory trend changes to the downside that were immediately reversed. In other words, the October warning failed.Today, the transports are getting close and should breach the low points seen from December through February. The industrials have another 600 points to go, but don’t dismiss that as out of the question. I do believe, however, that if the industrials fall much more to signal a negative Dow Theory trend change, it will be short-lived like we saw in October.
Although the Dow Industrials and Transports are not and have not been perfectly in sync for many months, the broad stock market has been acting okay and lacking most of major signs that the bull market is ending. More than likely, any weakness this quarter will be of the ending nature, completing the divergence seen in the two major indices as the Dow Industrials prepare an assault on 20,000.
If you would like to be notified by email when a new post is made here, please sign up, HERE.