Last night, I flew back from one of the best conferences I have ever been to in Chicago for the National Association of Active Investment Managers. Besides offering my outlook on many asset classes and themes for 2019, I sat through some really great presentations as well as networked with some of my closest industry friends and new acquaintances. So many bright and talented people. Some really good deep dish pizza at Gino’s East and tasty craft beer on tap.
On the flight home, in my usual aisle seat in the back without any legroom surrounded by all these folks who flew to the Dallas Cowboys (my team) game in Dallas, I was apparently the only who paid $6 to watch Direct TV on the two hour flight from Chicago. It was election night and I wasn’t missing a minute of it, not to mention not being able to open my laptop because the person in front of me reclined her seat and it almost hit me in the mouth.
Every 10 or 15 minutes someone in the back would yell out, “how’s it looking?” I would then give then a quick rundown of the earliest races. I toggled back and forth between FOX and MSNBC to get all views. Boy did that seem like night and day! The interesting part was in between my updates, random people started having political conversations without anyone yelling or name calling.
Someone would turn to their neighbor and ask who they were supporting. I heard everything from “only Democrats” to “anyone Trump likes” to “splitting the vote up”. The disagreement was, well, very agreeable and civil. It was really amazing and almost heartening. The discussion, certainly not my Cowboys who have become an embarrassment with no quarterback, no coach and the worst owner in football.
As of now, the Democrats have control of the House by somewhere between 5 and 10 seats and the GOP added to their control of the Senate by at least two seats. News programs have been reporting live from all over the country with every major political pundit sharing their views. It’s been like an army of people and opinions with millions of dollars spent.
But, hey, if they learned their lesson when our presidential election model forecast a Trump victory, they could have just read my Special Election Update and collectively saved their networks time, effort, energy and money. After all, what has transpired is exactly what the model predicted. It cost me basically zero to conduct my research and realize that what works so well in presidential elections does not work well in mid-term ones. However, I was able to model social mood which told me not to expect a red or blue wave.
Each party is feeling emboldened today. They both claim victory but also realize that they now have to work with each other to get anything done. All this talk of uniting and bipartisanship and mutual respect. Honestly, it makes me ill. We have seen this movie before and after a few weeks, we will be back to the same old divisiveness. It’s the same cycle. Rinse and repeat.
Jason Goepfert of Sentimentrader.com put out some research focused on mid-term elections with an unpopular president. Reagan’s, Clinton’s, Bush’s and Obama’s popularity right before a split Congress was 42, 48, 37, 45. Trump’s is currently 44.
Lost seats in the House were 28, 52, 30 and a whopping 63. While Clinton, Bush and Obama lost 6, 6 and 8 seats in the Senate, Reagan actually gained one seat. Trump looks to gain two or three.
In Reagan’s case, stocks skyrocketed almost 4% the day after election day, but keep in mind that a massive bull market had just really begun in August. The other presidents saw muted movement which is what I thought was going to happen today. Clearly, I was wrong on that front as stocks soared right out of the gate and never looked back.
Below is an update of the chart I showed in Battle Lines Drawn the other day. Stocks are now above all but one line, putting short-term control in the hands of the bulls. 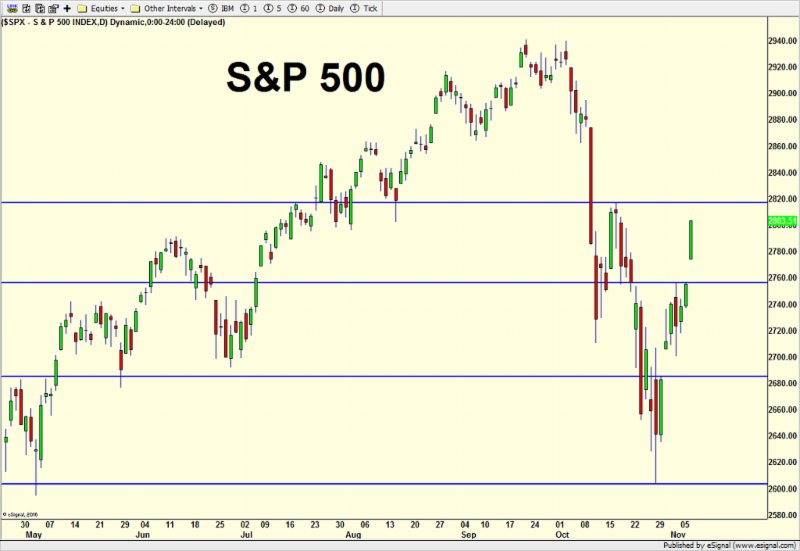 As I have mentioned before, stocks are now in the most favorable time of the year from several perspectives. First, Q4 has a nice seasonal tailwind. Second, that wind is even stronger after mid-term elections. Third, it’s blows even harder when there is a decline in the prior month or two. Finally, when we look at the four years of a presidency vis a vis the stock market, November of year two through May of year three is the strongest period of the entire four year cycle. In other words, the stars are aligned for one heck of a rally.
With all that said, given today’s strength and really the 2000 point rally since the lows, one of our short-term models may turn negative, once again, over the coming few days or so. Now that would be an interesting development during a very seasonally favorable time of year. We’ll cross that bridge when we get there.