Model for the Day
As with every Federal Open Market Committee (FOMC) statement day, there is a model for the stock market to follow pre and post announcement. Certain environments have very strong tendencies while others do not. Three meetings ago was one of the rare times where the models strongly called for a rally on statement which was correct as well as a decline a few days later which was also correct. Today, there is a significant upside edge which has been accurate more than 75% of the time. Stocks also typically see a range of plus or minus .50% until 2 pm before volatility hits and a bigger move is seen.

It’s also March option expiration week which has historically added a nice tailwind to stocks. So far, that tailwind has not been seen which means that the odds favor strength into Friday’s close.

1/4% Hike Against Better Economic Picture
Janet Yellen and her friends at the Fed have done an excellent job of preparing the markets for another rate hike today. After the December increase, the masses were not pricing in a March rate hike although I was very clear 6 weeks ago as well as in my 2017 Fearless Forecast.

“While the market is pricing in at least two rate hikes this year, I think they are on the low side. I would not be surprised to see a minimum of four increases in 2017 with the risk to the upside.”

I would say that today’s move has a 95% certainty. The Fed is going to raise the Federal Funds Rate today by .25%. The economy has definitely improved since the December rate hike and we have had back to back 200,000 jobs reports which are also stronger than at this time last year. The U6 or “real” unemployment rate now stands at 9.20% which is the lowest level since before the Great Recession. The stock market has continued higher. Even data from Europe is a little better.

Velocity of Money Still Collapsing
Turning to an oldie but a goodie, below is very long-term chart of the velocity of money (M2V) produced by the St. Louis Fed. In the easiest terms, M2V measures how many times one unit of currency is turned over a period of time in the economy. As you can see, it’s been in a bear market since 1998 which just so happens to be the year where the Internet starting becoming a real force in the economy. Although it did uptick during the housing boom as rates went up, it turned out to be just a bounce before the collapse continued right to the present.

The Secret Behind Low Rates
Continuing to raise rates, as I have written about over and over, also makes our currency a lot more attractive to foreigners. Remember, money flows where it’s treated best. Since early 2008 here, in Street$marts and on the various financial channels, I have been a devout secular bull for the dollar, even when trillions were being manufactured by the Fed. For years, I sat alone in my bullish house before having company over the past few years.

As I have written about, I truly believe that one of the main reasons Yellen and her inner circle worry about raising rates is because they are terrified of massive capital flows into the U.S. as the dollar index breaks out above par (100) which is already did and travels to 110, 120 and possibly higher, somewhat like tech stocks did during the Dotcom boom. Below is a chart I continue to show at each FOMC meeting. 120 is the next long-term target. 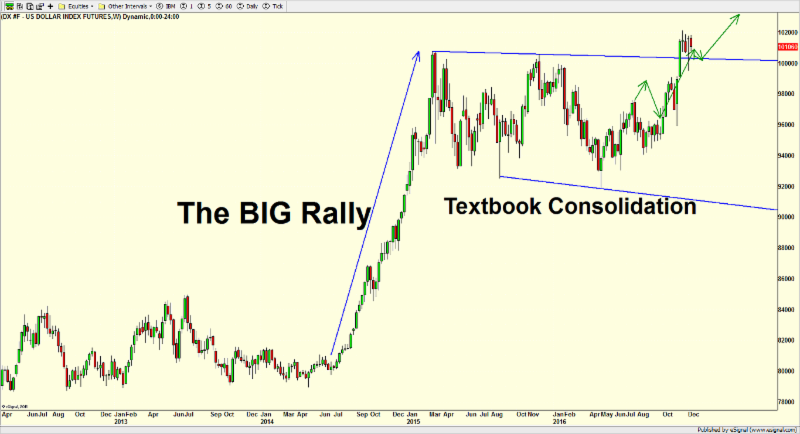 A soaring dollar would be great in the short-term for all except those who export goods. Our standard of living would go up. Companies with U.S.-centric businesses would thrive. Foreigners would buy dollars in staggering amounts at a dizzying pace which I argue would make their way into large and mega cap U.S. stocks. Think Dow 23,000 (my most recent target), 25,000 and possibly 30,000.

What’s so bad about that?
Eventually too much of a good thing becomes problematic. In this case, mass dislocations in the global markets would grow and that would almost certainly lead to a major global financial crisis later this decade. Think many elephants trying to squeeze out of a room at the same time. Think crash of 1987 on steroids. Yellen and the other smart people in the room must know this. You may not agree with their thinking and actions, but some of these people are scary smart.