Fed to Hike Rates Today In Spite of Falling Inflation. Dow 23,000 Next

As with every Federal Open Market Committee (FOMC) statement day, there is a model for the stock market to follow pre and post announcement. Certain environments have very strong tendencies while others do not. Five meetings ago was one of the rare times where the models strongly called for a rally on statement day which was correct as well as a decline a few days later which was also correct.

Today, as with most statement days, the first model calls for stocks to return plus or minus 0.50% until 2:00 PM. There is a 90% chance that occurs. The next model calls for stocks to close higher today and rally after 2:00 PM. That is usually a very strong trend, 75%, however with the bulls using a lot of energy over the past few days, that trend’s power has been muted significantly.

Finally, there may be a trend setting up for a post statement day decline, but there are a number of factors that still need to line up.

It’s also June option expiration week which has historically added a nice tailwind to stocks. So far, that tailwind has been seen just on Tuesday.

Janet Yellen and her friends at the Fed have done an excellent job of preparing the markets for another rate hike today. They have been chatting up a storm in their speeches and it’s also Yellen’s quarterly news conference and economic outlook update. I would be shocked if more than Neel Kashkari dissented.

While most pundits forecast two rate hikes in 2017, I have been very clear that those expectations are too low. In my 2017 Fearless Forecast, I offered that,

“While the market is pricing in at least two rate hikes this year, I think they are on the low side. I would not be surprised to see a minimum of four increases in 2017 with the risk to the upside.”

The flaw in my thinking is that I did not believe a change in the balance sheet would be a 2017 event. We will likely hear otherwise from Janet Yellen today. Markets are expecting to learn of a plan outline to begin to curb asset purchases by the Fed sooner than later. That should eventually lead to letting assets organically roll off the balance sheet rather than outright sales in the open market. The markets would be very surprised and caught off guard if Yellen speaks about a plan to sell bonds in the open market any time soon.

I would say that today’s move has a 95%+ certainty. The Fed is going to raise the Federal Funds Rate today by .25%. Banks will then raise the prime lending rate and other rates will move off that. While the economy continues to improve, Q1 GDP was less than stellar although recently revised higher. My own work suggests that Q2 could see GDP grow close to 3% with Q3 perhaps even higher.

Monthly job creation has been very strong in four of the past five months. Only March was a lemon. I expect the growth trend to continue. The official unemployment rate hasn’t been lower since 2001 and the “real” rate or U6 is down to 8.4%, the lowest since 2007. This data certainly support a hike.

The chink in the armor and what Neel Kashkari may cite if he votes against the hike is the recent decline in inflation. From a 5 year high of 2.7% in February, the consumer price index declined in March, April and May to 1.9%. That is exactly what the Fed does not want to see as it tries to normalize interest rates.

Turning to a chart I continue to show time and time again, below is a long-term chart of the velocity of money (M2V) produced by the St. Louis Fed. In the easiest terms, M2V measures how many times one unit of currency is turned over a period of time in the economy. As you can see, it’s been in a bear market since 1998 which just so happens to be the year where the Internet starting becoming a real force in the economy. Although it did uptick during the housing boom as rates went up, it turned out to be just a bounce before the collapse continued right to the present.

The Secret Behind Low Rates

Continuing to raise rates, as I have written about over and over, also makes our currency a lot more attractive to foreigners. Remember, money flows where it’s treated best. Since early 2008 here, in www.investfortomorrowblog.com and on the various financial channels, I have been a devout secular bull for the dollar, even when trillions were being manufactured by the Fed. For years, I sat alone in my bullish house before having company over the past few years.

As I have written about, I truly believe that one of the main reasons Yellen and her inner circle worry about raising rates is because they are terrified of massive capital flows into the U.S. as the dollar index breaks out above par (100) which is already did and travels to 110, 120 and possibly higher, somewhat like tech stocks did during the Dotcom boom.

Below is a chart I continue to show at each FOMC meeting. While Dollar Index bounced around between the blue lines after that huge rally on the left side of the chart, all was very well and that was normal and expected behavior. When price broke above the blue line late last year, I thought the next big move had started. I was clearly and definitely wrong.

In the strongest bull markets, price should not have declined much below 100. This has been an unexpected turn for the worse. However, I am not ready nor close to being ready to abandon my long-term positive position. If my view is going to continue to pan out, the dollar will likely spend some time going sideways before gathering itself for a run to 104 and then much higher in 2018 and 2019.

I still forecast that the final bull market price peak lies ahead and at least towards the 120 level. Nothing has changed in my long-term view that the Euro will ultimately fall to all-time lows below .80 and the Pound under par. Those are the same long-term targets from 2008. 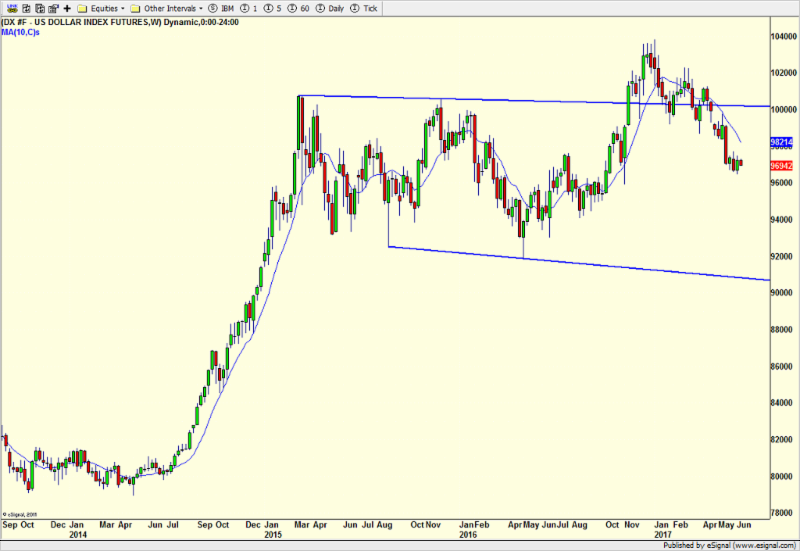 A soaring dollar would be great in the short-term for all except those who export goods. Our standard of living would go up. Companies with U.S.-centric businesses would thrive. Foreigners would buy dollars in staggering amounts at a dizzying pace which I argue would make their way into large and mega cap U.S. stocks. Think Dow 23,000 (my most recent target), 25,000 and possibly 30,000.

What’s so bad about that?

Eventually too much of a good thing becomes problematic. In this case, mass dislocations in the global markets would grow and that would almost certainly lead to a major global financial crisis later this decade. Think many elephants trying to squeeze out of a room at the same time. Think crash of 1987 on steroids. Yellen and the other smart people in the room must know this. You may not agree with their thinking and actions, but some of these people are scary smart.