How Stocks Fare on Inauguration Day & Beyond

Wednesday is Inauguration Day (ID), a time of supposed new beginnings and a fresh start for the country. The truth of the matter is that stocks have been behaving as if there has been a new administration since the day after Election Day which they typically do. That’s how the four-year Presidential Cycle works in the markets. The markets don’t wait until January 20th and then realize there is a new sheriff in town.

Intuitively, you would think that with all the positivity around ID, stocks would rally on the feel good mode. That sounds good, but as with most things in the markets, the data don’t support the claim.

In the post WWII era where there is a new sheriff in town, ID hasn’t been so kind to the stock market. Donald Trump broke 48 year ID losing streak although ID in 2001 was on a Saturday so I used the next trading day. Trump also saw the most positive ID in the post WWII era for whatever that is worth.

Now, to be fair, in 1977, 1981 and 2009 stocks were in the midst of declines or bear markets so ID certainly wasn’t going to halt anything in the big picture.

Let’s look ahead after ID and see how stocks performed 2 weeks, 1 month, 2 months and 3 months later. That may give us a better idea of how the market could view a new administration. 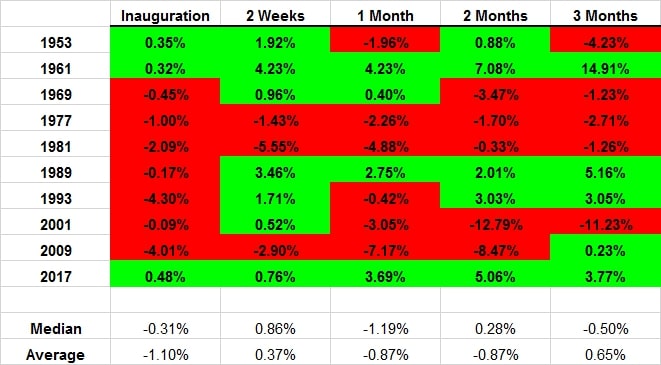 In 1953, Ike came in just as a large decline began to unfold. Stocks methodically chopped lower 20% to their final low in September.

JFK came in on the other end of the spectrum with a decline bottoming just before the election. Stocks then ran straight up into the summer of 1961 and all post-ID time frames were very strong.

Like Ike, Nixon saw stocks peak right after the election and except for a spring rally, the market fell throughout 1969 in a bear market.

In 1977, stocks were in a nasty bear market all year as Carter took over. All post-ID time frames were very weak.

Reagan came in during a choppy market, but a bear market quickly ensued that lasted into 1982 and kept all post-D time frames red.

Bush I followed Reagan and the market didn’t skip a beat as the bull market roared ahead. The post-ID periods were strong.

Clinton took over in 1993 during one of the quietest markets in history. Stocks plodded higher right to their peak in early 1994.

Obama joined the party in 2009 during what turned out to be the end of a long and deep bear market. Post-ID periods were very weak, but things turned around several months later.

Finally, Trump saw an immediate resumption of the bull market as he was elected and that strength carried all the way to the January 2018 peak. Like only JFK before him, Trump saw all periods in the green.

Although there are only 10 instances to draw conclusions from, my takeaway is that if an incoming president takes power when all is well and stocks are humming, the stock market will continue heading higher over the coming few months or so on balance.