I Do Love Lemonade

My last two posts last week were essentially taking lemons and turning them into lemonade. By the way I absolutely love lemonade, especially fresh and naturally flavored ones. Strawberry, blueberry, raspberry. Sign me up! Anyway, I started to see the making of a low last week and the first nail was hammered in on Thursday with confirmation on Friday. That was one of the nastiest and longest selling waves of the modern investing era. And I am assuming that it is over.

So far, we saw declines ranging from the upper teens to 30% in the indices. Some are this a bear market while others say it is just a deep correction in an ongoing bull market. I have always struggled with labeling. If 20% is the conventional bear market, is there really a difference between 19.90% on the downside and 20.10%? As if the rules should change.

No one can argue that we have seen a bear market in the NASDAQ. Between 1700+ stocks making new lows and the number of stocks down 50%+ it is hard to argue in hindsight. 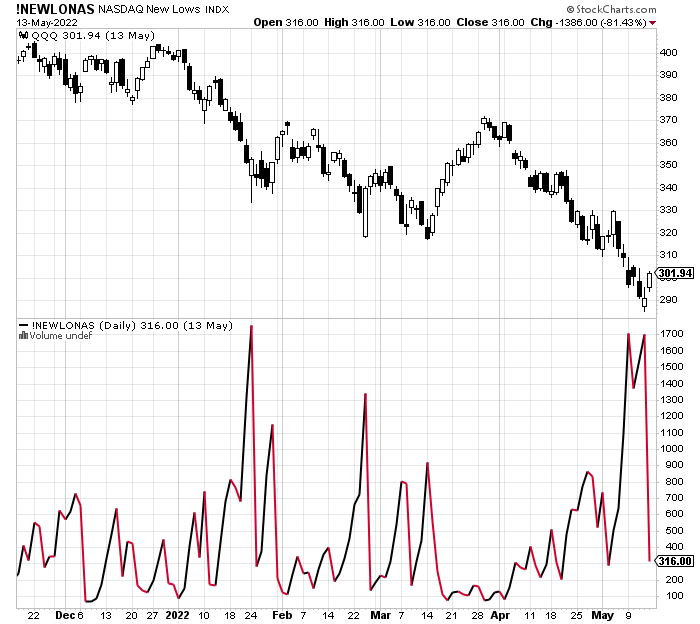 Obviously, the huge question now is what is ahead. First, without volatility calming down, it is going to continue to be difficult on investors. I also think that the stock market is in the bottoming process that will lead to a 7-12% rally into summer. That puts the S&P 500 into the range of 4200-4400. Friday was a 90% day where at least 90% of the shares traded were in stocks that went up. That’s important and finally confirms real buying, but it was one single day. We need to see more sustained buying.

The challenge is that it won’t be an easy, straight up run. And we know the Fed will not be coming to the rescue yet. That day is likely at least a few quarters away. I do think they will pivot and not have the intestinal fortitude to match Paul Volker, but it’s later than sooner. I also remain confident that we will not see recession in 2022. I am not yet ready to put my stake in the ground for 2023. If the Fed can thread the needle or land that jet on a postage stamp like they did in 1994 and 2018, Dow 40,000 is coming in 2023. If not, then we will see a mild recession like the early 1980s and stocks will be rangebound at lower levels. In other words, the majority of the damage will have been done, but no meaningful upside will be made until later in 2023.