As Randy Quaid said in Independence Day, Arnold said in Terminator and Jack said in The Shining,  I’M BACK. Well, kinda, sorta. While Randy and Arnold were awesome in those movies, Nicholson is among the greatest actors ever and The Shining may be the greatest horror movie of all-time. I still remember watching it from under a table in my parents’ house with blankets making a fort around me. Hearing people say “redrum” continues to give me chills.

As I mentioned over the past month, I was scheduled for some ankle surgery the week after the election. As such, I was likely going to take some time off from publishing. Surgery went well and I have been recuperating at home as I have to be laying on my back, horizontal for 23 hours a day. That part has not been fun. But I haven’t had any pain at all which is pretty amazing. My surgeon at HSS in New York was incredible, and fast. In 90 minutes, he took two pieces of bone and cartilage from my knee, mixed it with stem cells from my hip and filled in a hole in my ankle. He also filled my knee with some cadaver parts. Oh yeah, and he removed hardware on the other side of my ankle and cleaned everything out. The miracle of modern medicine!

I would have done an update sooner, but I have been learning how to type with the keyboard higher up. It takes me longer to type and I make even more mistakes, if that’s possible. Additionally, since I pounded the table to buy the decline into the election and expect a pre-election low, there hasn’t been an urgent need to write although there has certainly been a lot of action in the markets. One thing I am ecstatic about is that the election is over and the fatigue that goes with it, regardless of whether your candidates or party won.

We now have two major victories in the vaccine race from Pfizer and Moderna. I have been super skeptical of the latter because of all the insider selling by corporate executives into good news. Why would they sell their shares if they really thought the vaccine was going to work out? Well, I guess it turns out that they are better scientists than stock traders. Nonetheless, the news is great and I know I will be at the front of the line when the vaccines are available to my demographic. And don’t forget that Johnson & Johnson as well as Astrazeneca are supposed to report on their trials in the next 8 weeks.

Speaking of those big news days, check out the chart below of the S&P 500. On Pfizer day, the media wrongly reported that the surge was all about the vaccine. That’s not true. In fact, the market was already up big the second before the news broke in the early morning hours. And it closed at almost the exact same levels on the S&P 500. Other major indices had different results over the same period. On Moderna day, stocks jumped at the open again but the magnitude was smaller. What strikes me is that 9 days after groundbreaking news, the S&P 500 hasn’t been stronger. Yes, the Dow and Russell 2000 have been leading with better results while the NASDAQ 100 has been worse. 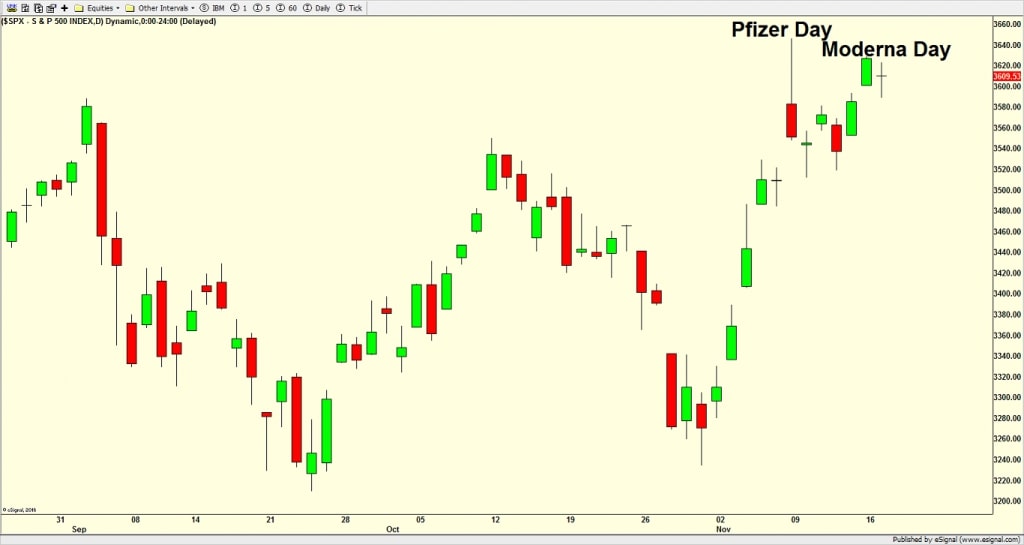 Why did I bring this up? I don’t know; it’s my first day writing again. It’s just an example of something that may “feel” better than it actually is. The real takeaways lie beneath the surface with a massive rotation in index and sector leadership which I will discuss in a subsequent post. One clue is that the data point to this being more than a fleeting move as we have seen for more than 12 years. This could finally be the real deal.

Anyone reading the blog knows that I was crystal clear over the summer that the Fab Five Plus mega cap technology stocks were seeing a major relative peak of significance in August when I made that treasonous call to sell or cut back on Apple stock. I will have more on this theme shortly.

The overall stock market has seen a very interesting dichotomy form of late with sentiment becoming frothy while the foundation has been very solid. This is a pattern we saw in the months leading up to the February all-time high as well as January 2018. Depending on your view, the market could be ripe for a correction or readying to blast off. I don’t think it’s either, but I will have more on this in another issue.

It’s great to be back, even though it is taking me much longer to type. I will continue to follow the doctor’s orders so I can hopefully be sprung from jail much sooner than later.