Is the NASDAQ 100 the New Dotcom Bubble?

Another day, another surge by the NASDAQ 100 without the rest of the indices joining the party. You know the few stocks. Apple, Amazon, Netflix, Microsoft, Nvidia, Facebook, Google and a few more. The Dow Industrials, S&P 500, S&P 400 and Russell 2000 are not behaving well. This is not, not, not 1999 and the Dotcom Bubble, but, but, but this is still dangerous behavior that can lead to consequences tomorrow, next month or next year.  Remember, markets can stay irrational longer than investors can stay solvent.

I did go out on a limb on Yahoo Finance the other day and forecast the NASDAQ 100’s outperformance, to put it mildly, was going to end this quarter. That means by September 30. I will stick with that until the market makes me look foolish, which it certainly has done more than a few times in my 32 year career. Here is the link to the segment.

There are a few ways to articulate the massive imbalance, one being the volume (shares traded) pouring into the NASDAQ versus the NYSE. Below in the top chart you can see the 10 day (blue) and 20 day (red) average volume of NASDAQ versus the NYSE. In short, you do not need a PhD to see that all the excitement is and has been in the tech sector. The charts of the S&P 500 and NASDAQ 100 are below. 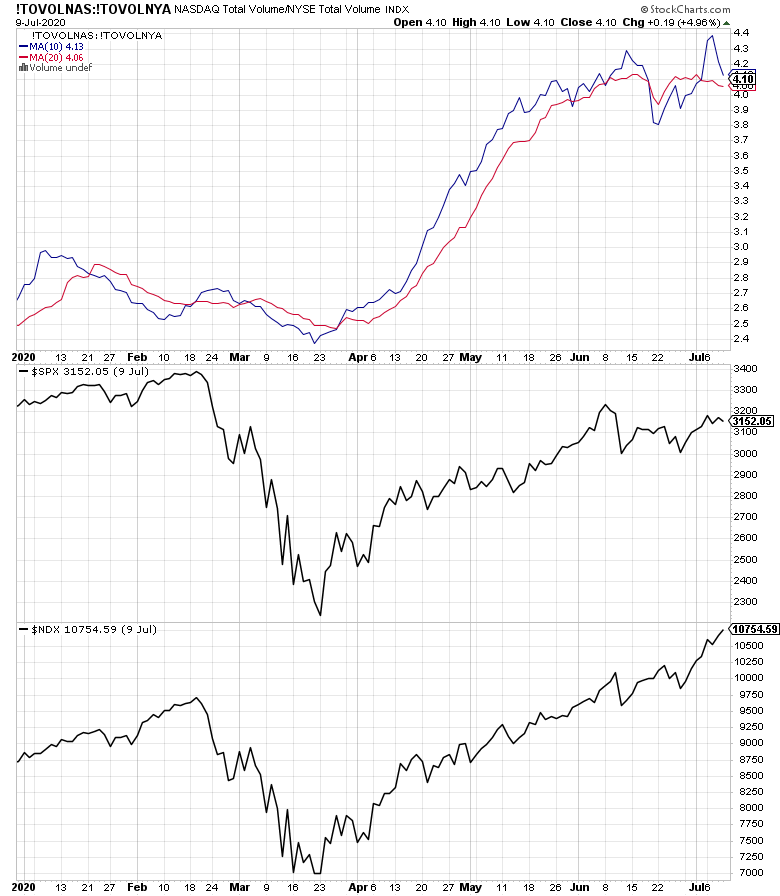 As I mentioned above, this is not the Dotcom Bubble. It’s not even a bubble. I know that may sound crazy, but true investing bubbles are generational at best. Yes, we have Robinhood’s free trading platform today and that may resemble the new online platforms of the late 1990s, but it’s not pervasive like the Dotcom Bubble where even my grandparents with their municipal bonds and Mobil stocks wanted a piece of the casino-like action.

I vividly remember the Dotcom era when companies had no earnings at all. Some even had no revenue. I will never forget being told that even though I was a “young fellow”, I didn’t get the new age of investing where companies were being valued by eyeballs over earnings. In other words, how many people on your website.

Traders were buying stocks in the morning, checking in on them at lunch and selling them by the close for insane profits. I remember working on my golf game over lunch during the craze when a woman named Wendy came running out screaming to her husband Dennis that she just made 15% that morning on Ariba and they should start looking for a house at the shore. While I refused to engage client money in this nonsense, I will admit to buying one single Dotcom stock for myself. At Home was the name and it ended up being a $0 very quickly. I think I bought it high and sold it low, very low.

I had so many friends who got wrapped up in it. They were all making crazy money day in and day out, week in and week out. They went from humble and quiet to confident, to giddy and then greedy. Christmas break in Vermont around Y2K hit a feverish pitch with absurd amounts of money spent on lavish luxury goods and parties with top notch champagne being poured like tap water.

A few friends even offered to manage my firm’s money because they now knew much more than I did. Except for one very sharp, conservative and humble couple from DC who sold 100% of their public and private holdings in early 2000 and became school teachers, the rest lost not only their profits, but their principal as well. Bulls and bears make money. Pigs get slaughtered.

2020 is not 1999-2000, not by a long shot. But that doesn’t mean the current behavior is constructive or positive. It’s not. Sooner or later there will be consequences and punishment.

I want to leave you with this true story from the Dotcom era that I use in my email marketing sequence.

It’s a sad story. You see, my doctor was also my client. He had placed his portfolio in my hands in the mid 90’s. It was doing well. The blue chip investments were netting him nice steady gains. My goal as his financial advisor was to first to preserve capital, then to invest it with the best risk/reward ratio so it can prosper. That’s what he asked me to do.

But my client — I’ll call him Dr. Simmons— had friends investing in these new Dotcom companies.

In our quarterly review meetings, he’d ask about investing in these new, highflying tech companies. “My friends are making a killing! Why aren’t my investments in this sector?”

“They don’t make sense,” I told him. “They have unchartered valuations, no profits, no dividends, and analysts are valuing ‘eyeballs over earnings’. I can’t see how they can make money.”

Dr. Simmons became more unhappy as he saw his friends’ stocks soaring and their bragging. The doctor had a house in Connecticut and one in Florida. He was soon to retire and planned to spend his time between the two, playing golf in the sun, relaxing on the beach, coming back to visit grandkids.

In late 1999 he fired me. He took his portfolio and moved it to Merrill Lynch. His new advisor sold him on the high-flying tech stocks. It was an easy sell. For a few months, he saw those outsized gains.

Then, in 2000 the tech bubble burst. Dr. Simmons’ retirement dreams shattered with it. He lost 75% of his retirement savings! He had to sell his house in Connecticut. He even had to go back to work part-time.

You only have one shot at building a good retirement. As years pass, there’s no do-over. Throwing caution to the wind during retirement is something that makes me very uncomfortable, to the point of being fired over it.