Just Like the Crash of 1987, an Interest Rate Driven Decline in Stocks

When I woke up today, I wasn’t planning on doing this update. My original plan was to begin a new Street$marts and talk about stock market crashes and the panic I saw in the market over the past two days as well as address some emails I received. This was going to be just one of the articles written. As I got going, it got longer and longer and longer with all of the charts and I ran out of time.
Stocks are seeing wild swings right now and Thursday was the first day where the bottoming process began. I didn’t say it was the ultimate low to close your eyes and buy. I did like what I saw with some panic creeping in. That could mean the first bottom is in or close at hand unless Friday turns out to be bad for the bulls. We shall see.
With the dramatic market volatility of late, I want to take a look at what kind of decline this is, meaning how similar is it to other declines and can we learn anything. So far, we are seeing what I called “normal, healthy, routine and expected” when the nice folks from NBC Connecticut stopped by yesterday. Here is the link.
https://www.nbcconnecticut.com/on-air/as-seen-on/Expert-Discusses-Stock-Market-Dive_Hartford-497054361.html
I commented on Twitter how interesting it was that the media paraded out all of the permanently negative pundits for their victory lap. People who have been negative for 10+ years somehow think they have been proven correct and NOW it’s finally different. The bull market is over, according to them. At least they’re consistent!
I have also found it ironic that so many of the people who completely missed this decline are the ones now opining on how to play it and when it will end. At least it caused me to chuckle. I remember how so many pundits told investors to sit tight the entire way down from 2007-2009 and then crowed when stocks finally rallied. There’s just no accountability and that leads to no credibility. In my case, I am accountable to my clients every day, week, month, quarter and year. Numbers don’t lie and sometimes over the years I have to do a mea culpa. In plain English, every now and then, I have to admit that I stunk.
I want to thank the good folks at Yahoo Finance and Seana Smith for doing a follow up segment with me via Skype to find out what my thoughts were on the decline after warning of this on September 25. You can find the discussion at the 5:20 mark on the link below. Boy, I cannot believe how fat I look over Skype! Am I that fat? I probably could use a little weight shedding into winter!
https://finance.yahoo.com/news/stocks-red-yesterdays-big-selloff-150134476.html
Back to the topic at hand. As you know, I rely a lot on history for a lot of my analysis. While markets may not repeat, they do rhyme as Twain is purported to have said. I went back to 1985 and looked for times when stocks declined at the same that the yield on the 10 year treasury note was rising considerably.
Let’s pause for a minute. Most people think that stocks always go down when long-term interest rates rise and that bear markets begin with rate spikes. Well dear readers, the facts aren’t in evidence to support that. In fact, bear markets typically begin with long-term interest rates in decline as the market shifts to a more defensive posture. In other words, the stock market begins to anticipate some kind of system or economic weakness ahead of the bear market so long-term interest rates roll over.
With that theme in mind, what I found since 1965 was really interesting.
6 times we have seen the stock market pullback more than 6% with the yield on the 10 year treasury note rising sharply right before. It’s has not happened all that often. The first and granddaddy of them all was 1987. Before people start with the emails, yes, I know it was an outlier and crashes are generational events. But it does fit with my theme.
The yield, essentially the interest rate, on the 10 year treasury note is below from 1987. You can see how it was going up, up and up right until the day the stock market crashed which I am showing with the purple arrow. The second chart shows how stocks topped out in August 1987 but rates just kept going higher. First, stocks corrected 10% in September 1987 and rallied into early October before massive dislocations occurred with rates and the dollar into the crash. No recession ensued. 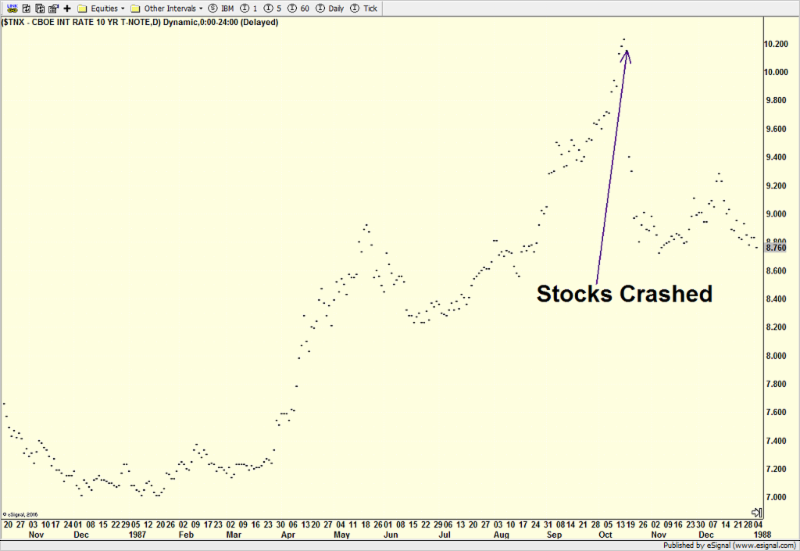 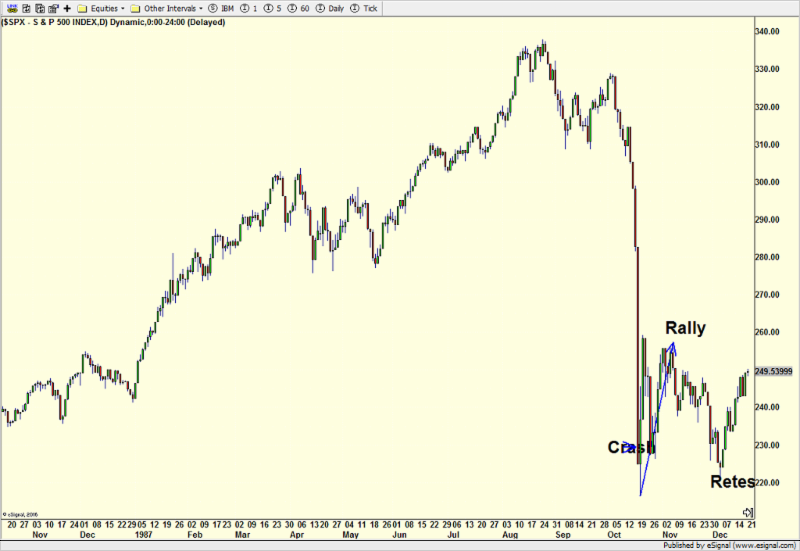 Next, lets’ move to 1994 where long-term interest rates were rising sharply in February and March. Eventually, the stock market sent a strong message that it was not happy about the higher rates and corrected 10% as you can see from the second chart. The real carnage took place in March 1994 with an almost straight line decline to the bottom. That decline was the largest in almost four years at that point and felt a whole lot worse to investors who were not used to the volatility. 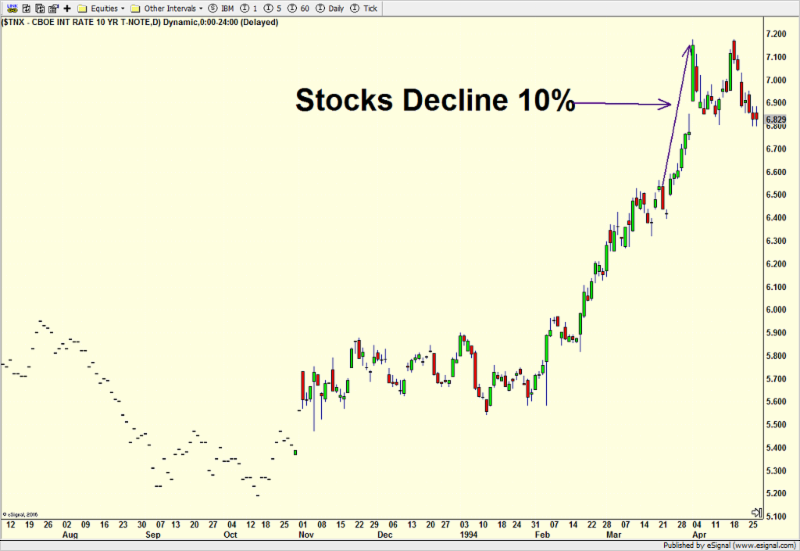 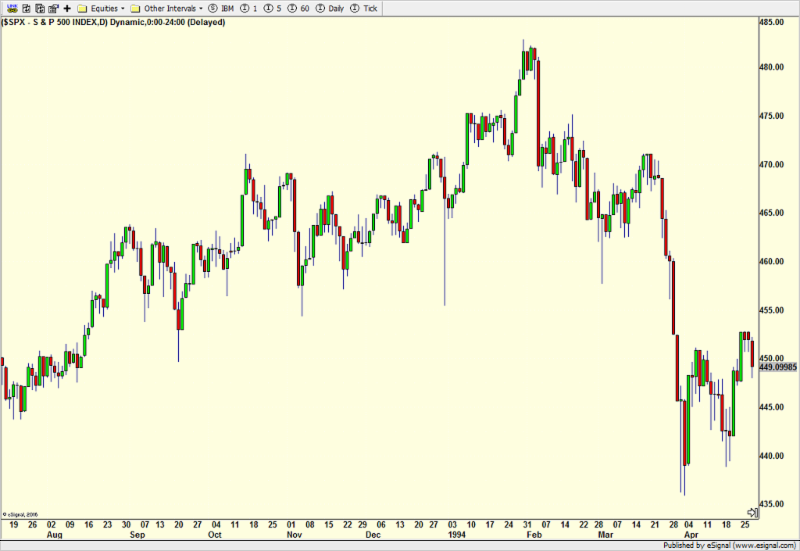 1996 is next and you can see a steady rise in long-term rates all year before stocks said enough was enough. The July pullback was the largest decline since 1994 with rates being a primary driver. The second chart, just like 1996 and 1987 before it, saw the real peak in stocks well before the downside acceleration began. It’s almost like stocks peaked, routinely pulled back, tried to rally and then fell hard under their own weight of higher rates. 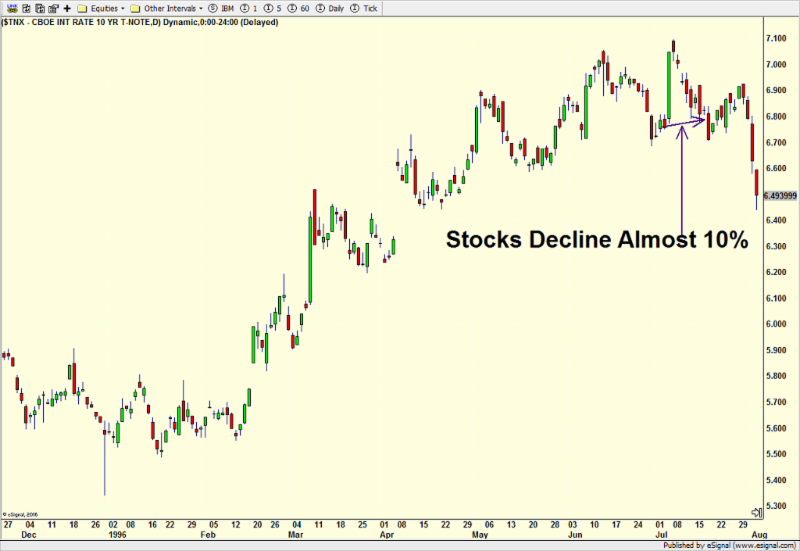 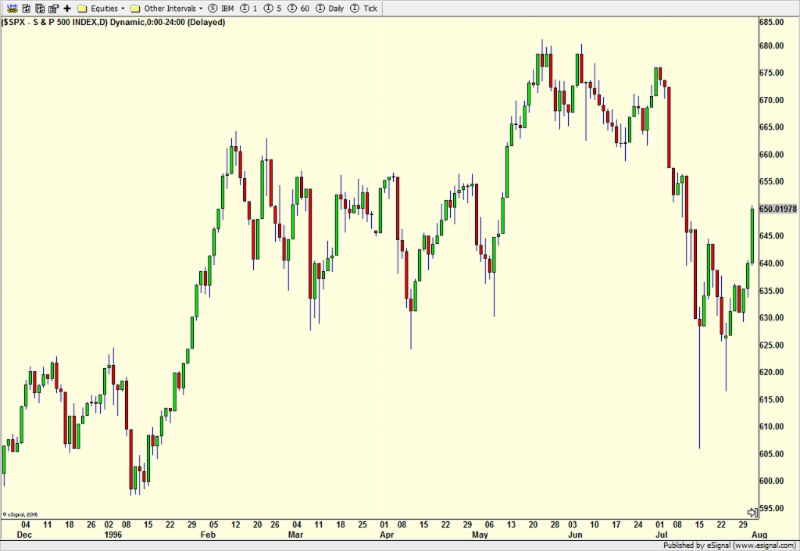 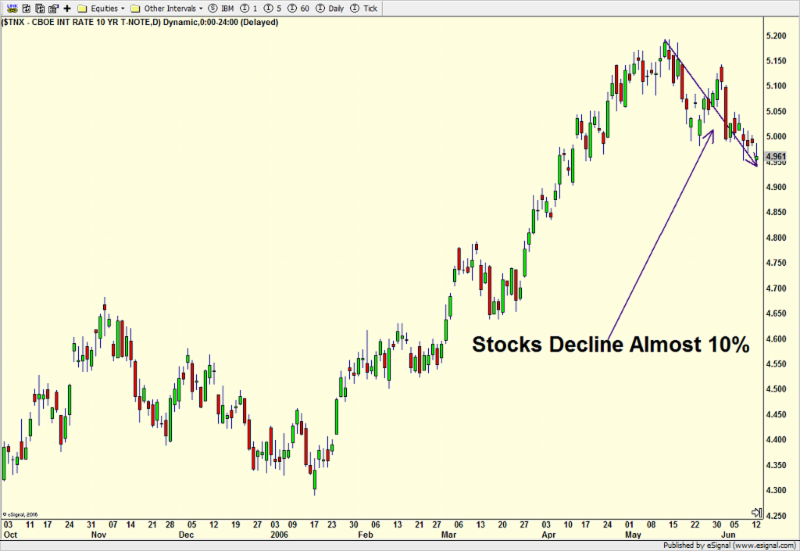 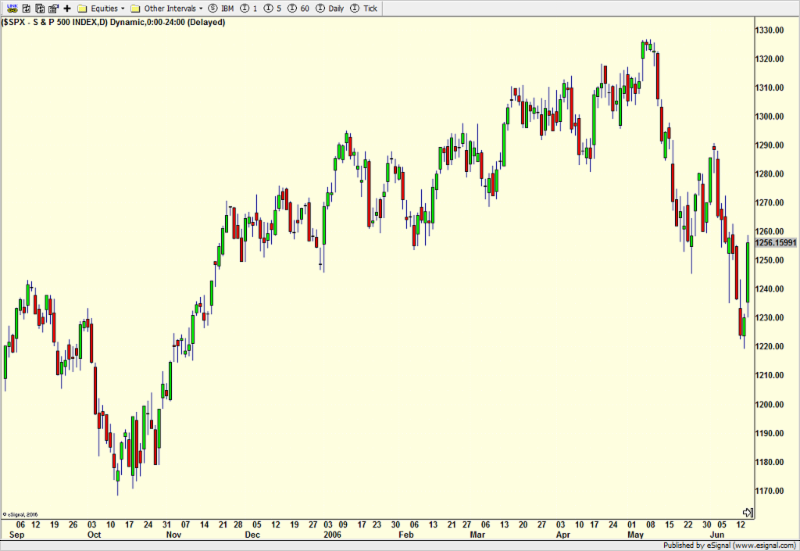 And now we come to 2018 where this theme plays out twice. Rates were rising sharply since September 2017. And while there were other factors involved in the Q1 decline, like volatility products and China, I am 100% the same was true in prior years. Interest rates laid the groundwork for some spark to cause the decline in stocks.  On the second chart, you can see the January high in stocks followed by a sharp decline with much complexity. That’s similar to 2006 although with more “crash like” action with a few huge down days in absolute terms. 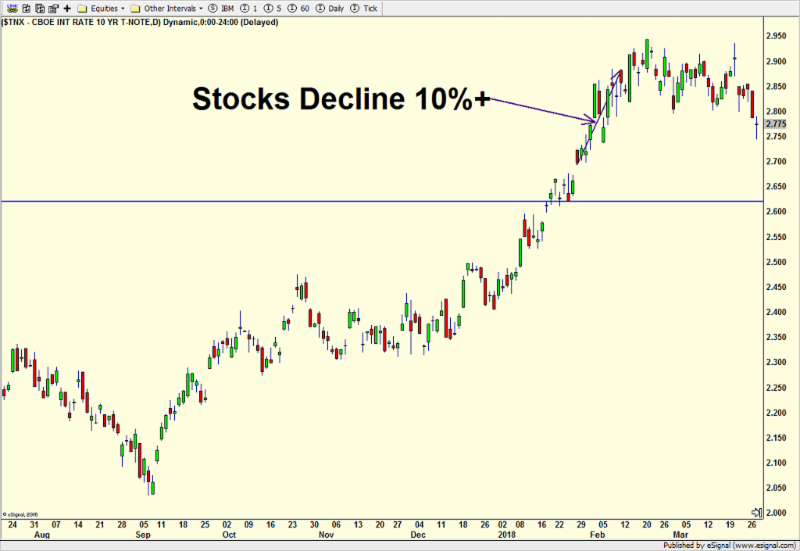 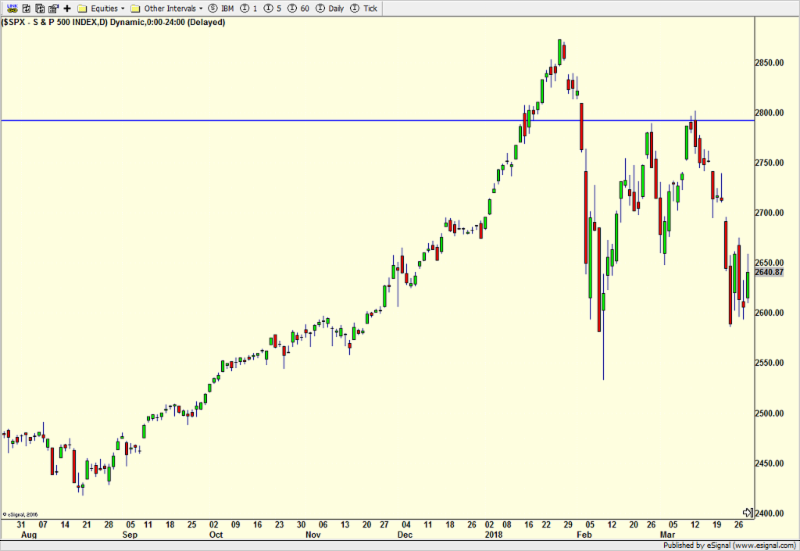 Today, we are seeing a similar landscape. Yields on the 10 year note have been spiking since August. Stocks basically peaked in September with a secondary peak in early October and have fallen sharply. 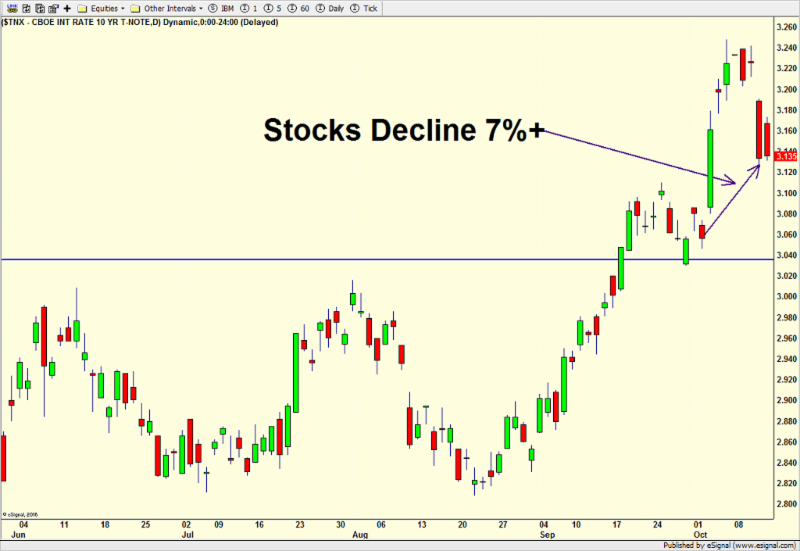 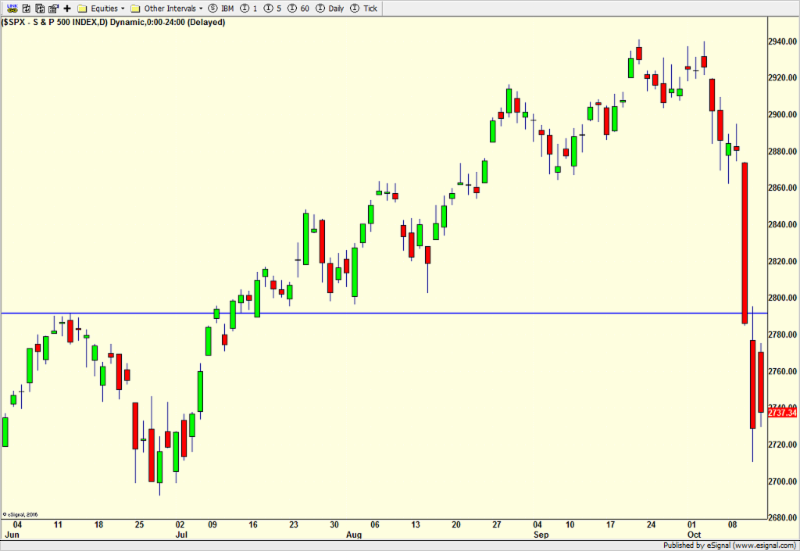 In all cases listed, stocks quickly bottomed and rallied to new highs although 1987 took the longest after such a large decline. None were part of long-term declines. The economy also continued to expand without recession in the near future. A much more worrisome warning will come when interest rates begin to roll over with stocks marching higher but the foundation of the stock market crumbles. That’s seen at almost every single major peak of the last 100+ years. It’s something that’s on my radar screen for 2019 and 2020.