As you know my thinking regarding inflation has changed over the past few months following the reports released in May and June. Both of those showed white hot inflation with very counterintuitive market reaction. By that, I mean that the securities that should have fallen hard actually rallied and vice versa. After the April report was released in mid-May I thought it was just an anomaly, but back to back odd reactions had me rethinking my thesis.

Take a look at the chart of the 10-Year Treasury Note. Yields peaked in March and didn’t bottom until recently. Falling yields and white hot inflation do not compute, unless the markets think something is changing. Even though yields seem poised to run higher from here, they have much work to do before turning the trend positive. 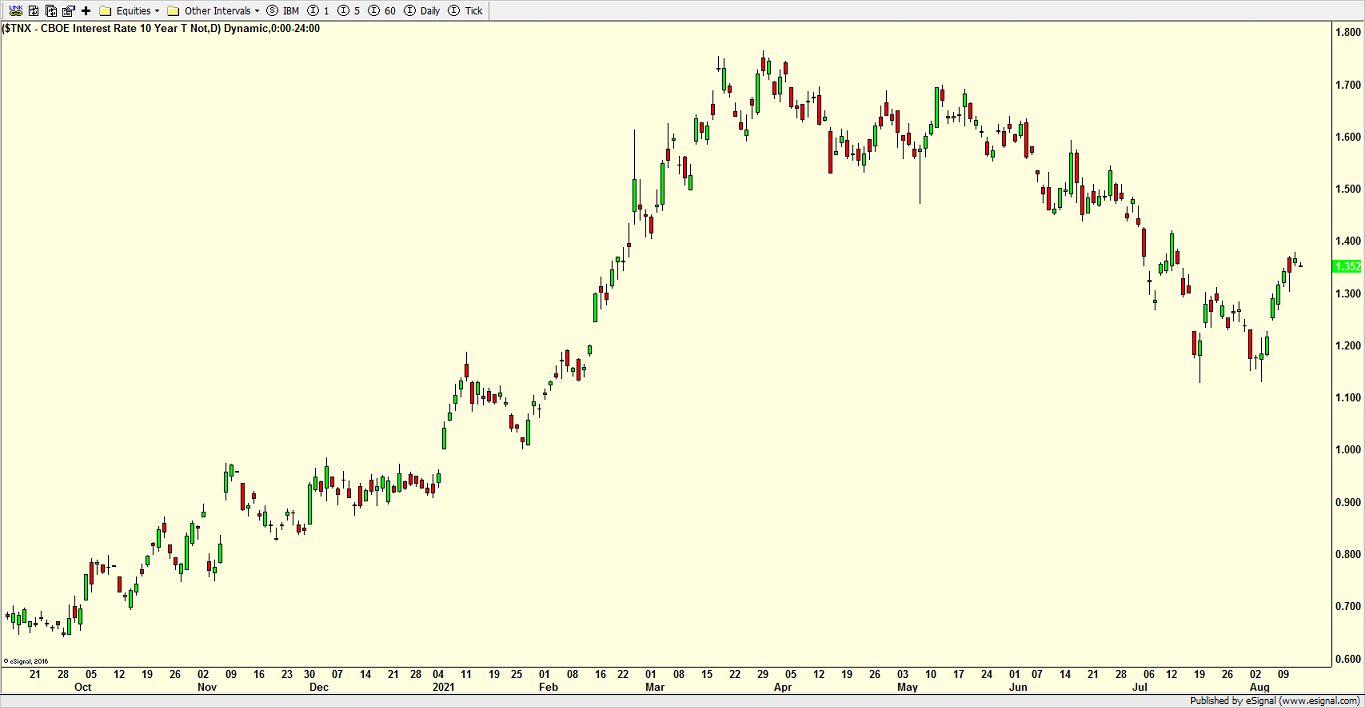 What were the markets saying?

To me, the markets were warning everyone that inflation may be peaking over the summer and it was not going accelerate higher like many were projecting. Fast forward to this week with another release of CPI and PPI, consumer and producer inflation. While both reports remained hot, but not hotter and rising from last month, reaction was once again muted. Bonds went down ever so slightly. Stocks went up a bit.

This thesis gets more and more fascinating. While more and more investors accept and plan for inflation, while consumers everywhere Google the term and how to combat it, it is possible that we are seeing the worst of it right here and right now. If that’s the correct read we should see inflation begin to decelerate in the fall.

Remember what I have written for 32 years. It’s not what the actual news is, but rather, how markets react. Markets should love the economy and earnings to continue to see strong growth with inflation easing off. On the flip side, look out if I am wrong about inflation peaking and growth is the one that goes down. That would make “Houston, we have a problem” the new theme.

Heading into the weekend, semis have been down five straight days, but the pullback hasn’t done any real damage. Both internet and comm services are at price points where they should garner some attention from the bulls. Banks, industrials, materials and transports have all righted their ships and have rewarded the bulls this week. Energy has been underwhelming of late. Of important note, the only sector at new highs is the defensive consumer staples. That’s not exactly the risk on sector you want to see leading.

It’s been a relatively quiet week for our portfolio activity. No real changes on the index front. I started to buy the gold and silver sector in that strategy and bought some comm services and more transports at the expense of internet. In the emerging space, India was sold and Russia was bought. I also bought Match Group for our Unloved Gems strategy.