The stock market has been down 5 straight Fridays and 8 out of the last 9. That in itself tells you all you need to know about market confidence, or lack thereof. That’s also what happens during a decline that leads into the bottoming process and finally a or the bottom.

Most of you know I never shy away from the camera. In fact, I don’t think I have ever met a media story I didn’t like. And it’s not because we derive business from appearances. Quite the contrary. I find the media to be a great forum to concisely share my thesis. Last week, I had two opportunities which you can view below. In both of them I was as clear and direct as I can possibly be. None of the “cautiously optimistic” garbage or “I’m a fully invested bear” nonsense. I may be right. I may be wrong. I like to think I am much more right than wrong. But there is no equivocation.

October As The Bear Killer;

Market bottoms ‘form when no one wants to own stocks’: Strategist;

As I was working on this post I saw a tweet from Wall Street Journal and Fed insider Nick Timiraos. If you’re not familiar, each Fed chair seems to have a “go to” reporter at the WSJ to leak information to about future Fed moves to slowly prepare the markets. Ip and Hilsenrath and now Timiraos. Good gig if you can get it. Today we learned that the Fed may move from 3/4% hikes to 1/2% hikes as soon as December. The anticipated 3/4% rise in November remains.

Is this the long-awaited pivot from the Fed? It’s too early to tell, but as I have been saying and writing, it take 6-9 months for the economy to feel Fed moves. That means the real economic damage remains in front of us in 2023. Of course, the markets have already priced that in, being down 25% on the S&P 500 and almost 40% on the NASDAQ. Remember folks, stocks have not been decimated because the economy and earnings look great for Q4 and into 2023. And the markets usually bottom well before the economy does.

I know I keep repeating myself, but the markets should find a low in Q4 which is right now. And October has the highest likelihood of that occurring. We just have to keep watching for confirmation signs like more buying stampedes and good leadership. We absolutely need to see the 2-Year stop going up along with the dollar. I am also keenly focused on high yield bonds which we started buying earlier this week for the first time in a few months.

Having the markets close up solidly today would be an important victory for the bulls. Having them close at new highs for October would be the next step. Below is the S&P 500 which is a weaker index along with the NASDAQ 100. The Dow Industrials, S&P 400 and Russell 2000 recently scored new highs for October. That is very important. 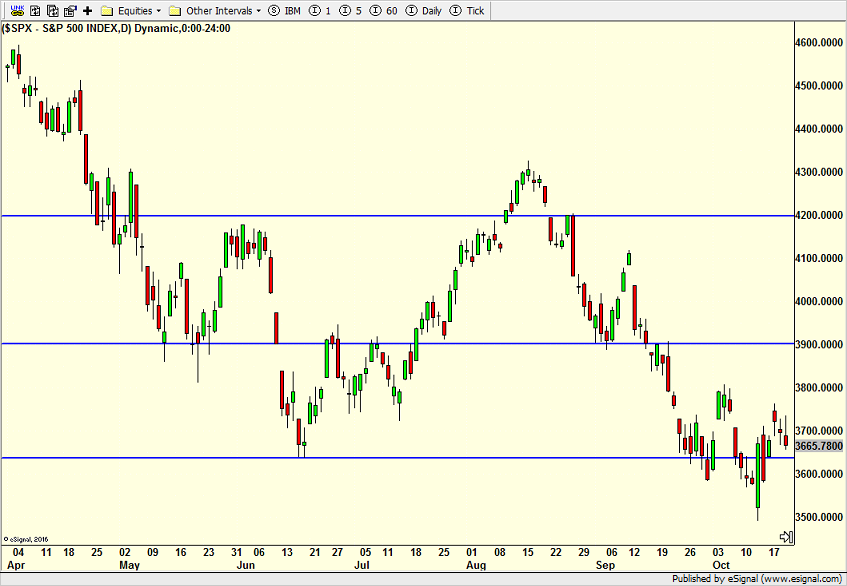 A beautiful fall weekend in New England awaits. 6 Flags with the little guy and his friend. Baseball game in the morning. Rocky Horror Picture Show party and then a flight to Dallas for a conference on Sunday. And no, I am not surprised the Yankees are laying an egg. We’ve been flawed all year and decimated with injuries. You can’t beat championship competition without being at your best. The little guy and I did go to the game and sit like idiots for three hours on Monday night before they postponed the game. And while I wasn’t keen on going back on Tuesday, how could we not? 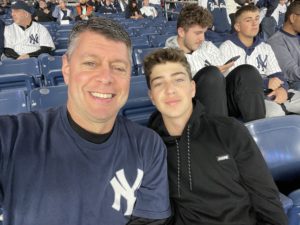 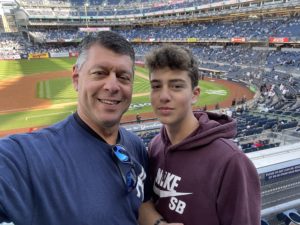 I lost a friend yesterday, suddenly. He was a pioneer and one of the most brilliant and accomplished cardiologists in the history of the field. But we weren’t close during the glory years of his storied medical career. We became friends at synagogue over the years and saw each other most Tuesday and Wednesday mornings. I found him to be so wise and even-keeled. The two of us had two of the worst singing voices on earth. He sang in the key of Z (his last name) while I sang in the key of me. People said we were painful to listen to. When things hit the fan at the synagogue when I was president he took me aside, supported me and gave me sage advice. He would sometimes pop in my office when he was getting massage next door to BS for a few minutes. In his second career he became an accomplished poet and painter and even got me into it, at least a little. We had this great running inside joke about Israeli poet Yehuda Amichai. We would belly laugh out loud and no one understood. Rest peacefully Barry Zaret. You were one of the great ones personally and professionally.