More Warning Signs – More the Bulls Just Run Over Them

I use the high yield bond market in a number of ways at the firm. It’s an asset class that’s used in five of our models as well as a vital canary in the coal mine. This week, Ball Corp., issued a 10 year high yield bond with a coupon (yield) of just 2.875%. That’s under 3% for a junk bond and bordering on insane! If you want to gauge the appetite for risk and yield, look no further.

Now, just because we are seeing greed in this market doesn’t mean Armageddon is around the corner. This behavior can last days, weeks and months before it matters. One of the tells that something is changing is the spread (difference) between Treasury bonds and junk bonds. When that spread widens significantly, especially with the Fed supporting the market, I will become a lot more concerned for more than just a pullback.

The other bothersome item that I saw this week was in a previously mentioned worrisome area, big tech. Y’all know my concerns about the Fab Five relative to the broad stock market. I won’t rehash them here. They’re all over the blog.

Two days ago which is the green candle on the far right of the chart below, the NASDAQ 100 was up more than 2% on the day. That’s a big move. On that day, there were stocks trading lower than higher on the NASDAQ. Additionally, there was more volume flowing into stocks going down than stocks going up that day. Remember, that was 2% up day.

That tells us the generals went full steam ahead into battle, but the troops were hunkered down in their bunkers. That’s not healthy nor a recipe for victory. 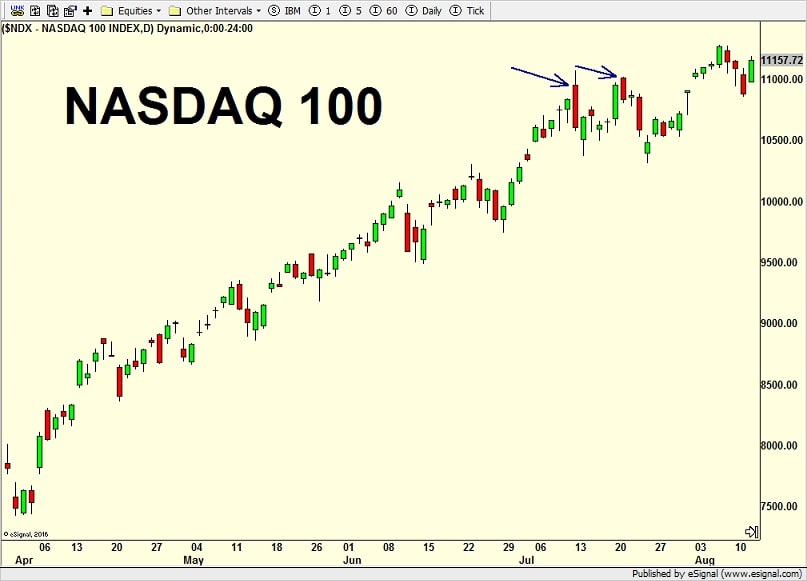 At some point all of these warnings will matter. Remember, we started seeing giddy sentiment last November and took until February before stocks found their excuse to plummet. In today’s case, we have unprecedented and extraordinary measures by the Fed.