Plenty of Warnings Signs for Stocks – Bulls Run Right Over Them

The bulls have run hard this week although the window of opportunity for a decline has not closed yet. There are all kinds of cracks in the market’s foundation. So far, each and every time the market has just run over them. And before someone asks, the answer remains yes. I am still very concerned about the outperformance in the NASDAQ 100 and those 5 stocks in particular versus the rest of the market. No matter how you slice it, the fact that Apple, Amazon, Facebook, Microsoft and Netflix have been ubiquitous and dominate the various indices they are of is not a good thing.

I have no idea how this party ends. The fundamentals make perfect sense. The macro picture makes perfect sense. I only know from 32 years in the business that when everyone owns certain stocks and no one can find fault, it usually does not end well. And I am not talking about no earnings, no revenue stocks from the Dotcom Bubble. GE comes to mind as a stock that everyone owned and could no wrong. Wall Street fell over itself praising and upgrading it for years, right into its all-time high in August 2000. 8 years later it was almost insolvent.

On Thursday, the major indices were nicely higher. However, there were more stocks down than up. There was more volume flowing into stocks that declined than rallied, very reminiscent of late 1999. The major difference from then is that Fed wasn’t dropping nuclear bombs liquidity day in and day out. The Fed wasn’t buying every piece of fixed income, including junk bonds and Congress wasn’t creating trillions of dollars out of thin air. Never underestimate what a tsunami of liquidity can do to markets.

And remember, markets can stay irrational longer than investors can stay solvent.

Today is the monthly employment report. I don’t expect another huge upside surprise. But, that doesn’t mean the bulls won’t try to run the bears in heading into the weekend. The S&P 500 is now a stone’s throw from all-time highs, something I did not forecast until 2021. I think it gets there sooner than later. The Dow Industrials, S&P 400 and Russell 2000 won’t be as easy, but be careful being a cavalier bear. Momentum is very powerful now.

Semis, transports and discretionary continue to behave very well in this 3+ month old bull market. Only banks are bucking the trend and causing concern. Don’t qualify why banks act the way they do. Go with it. High yield bonds are also mowing down the bears. The Fed is obviously helping on that front.

One of my favorite canaries in the coal mine continues to score new highs. It’s the New York Stock Exchange Advance/Decline Line which measures participation in the market. It’s the second chart below and it indicates a low likelihood of a large decline. I said low,  but not impossible as we saw in February. 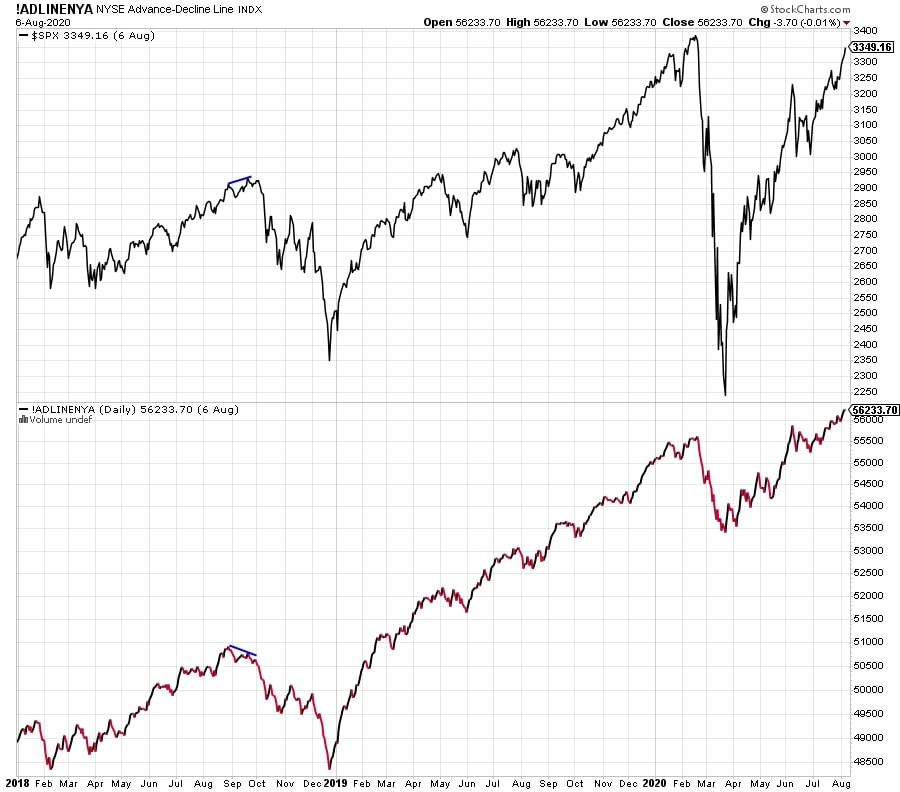