The day before Flash Crash II last week, I opined that the bottoming process could begin as early as last week. From my seat, it did. One week removed from the mini crash or crashette and stocks took it hard on the chin again. China was blamed, but that’s only a cover story and coincidence. However, unlike August 24, we did not see another Flash Crash. There was no panic. The selling was fairly orderly, which can be viewed as a good thing and a not so good thing. Volume was on the light side. Market internals were abhorrent.

In short, stocks are shaking out from mini crash type action according to history. Of all the declines since the bull market launched in 2009, including the 20% one in 2011, the current correction gives the bears the most ammunition to claim that a new bear market has started. But before you jump to conclusions, read on…

I remain steadfast that while the bull market may continue to be old, wrinkly and not exactly the pillar of health, it is nonetheless alive. That’s the same conclusion I have drawn during each and every decline since 2010. The final peak lies ahead of us and that’s very likely to be north of 20,000 on the Dow.

Who in their right mind would forecast fresh all-time highs ahead, let alone Dow 20,000 with China imploding and global recession supposedly all but a certainty. And there is always a risk I am wrong, but I do love being in a camp by myself!

So getting back to the action since August 24, you can see a few different ways in light green arrows on the chart below on how this bottoming action may play out. I chose those paths by looking at other similar action. There weren’t many over the past 30 years where a bull market peak was so close. That was criteria number one. The bull market peak was within two months of the crash.

Defining the actual crash isn’t as easy. It’s easy to spot in hindsight and you can certainly feel it when it’s happening. It’s rapid downside acceleration without any intervening rallies that usually leads to a 3%+ down day at the end. 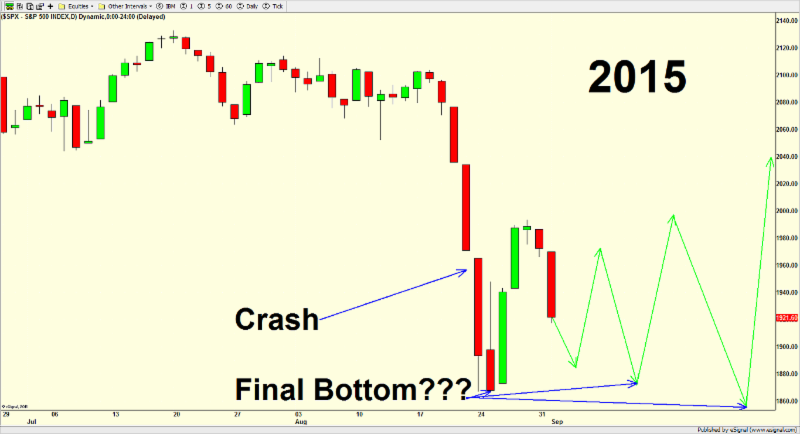 I am going to take you through each occurrence to compare and contrast starting with the most recent. The years will be listed on each chart along with the “crash”, one of the most overused words in investing lexicon, and then where the final bottom was before stocks took off again to the upside.

On the surface, 2011 and 2015 look very similar although the decline in 2011 was more damaging and deeper. It took roughly six weeks to bottom. 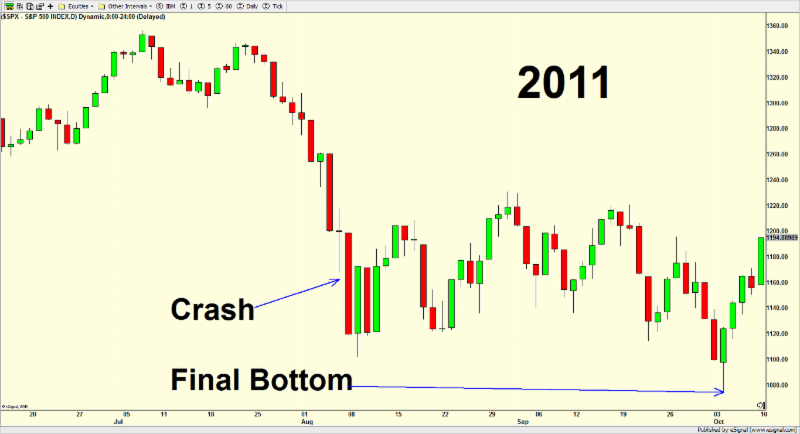 2010 is next. That’s where we saw the first Flash Crash which doesn’t seem all that bad on the surface. This week’s action looks very similar to the three day rally immediately after the Flash Crash. The final bottom was eight weeks later and at prices significantly below the crash, something very unusual. 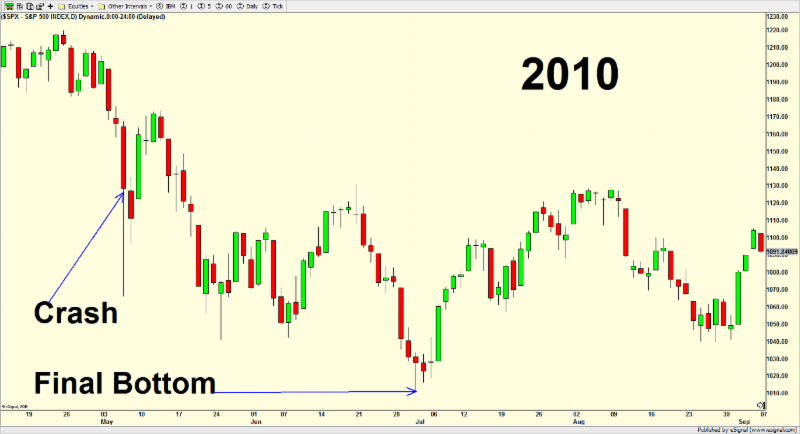 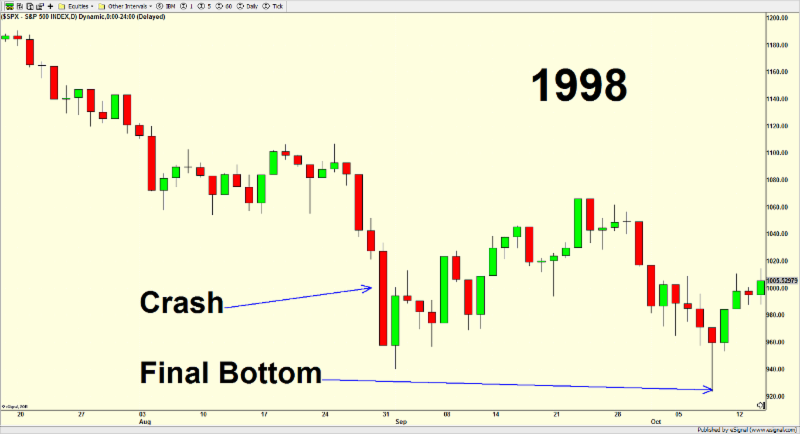 1997 is below and that crash behavior doesn’t really behave like the rest. Stocks pulled back a little, but the crash was essentially a one day decline that was sharply reversed the very next day. 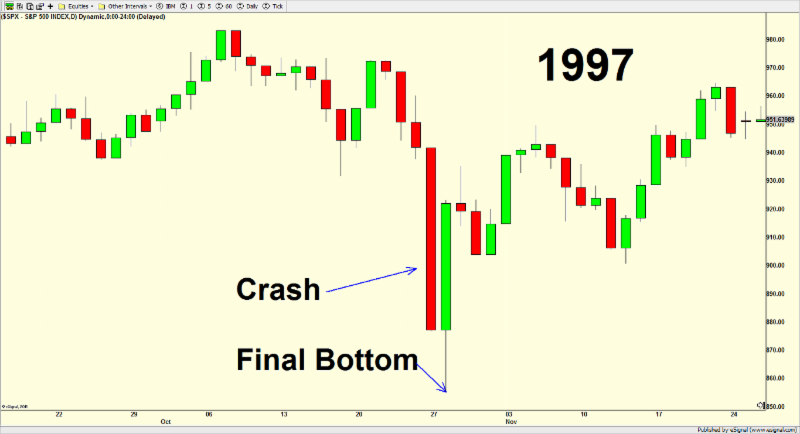 1994 is next and while the decline was not even 10%, the post crash action was very similar to most other periods. I marked the final bottom 11 weeks later because that was low from which stocks finally rallied, but you can certainly argue that it was right at the day of the crash. 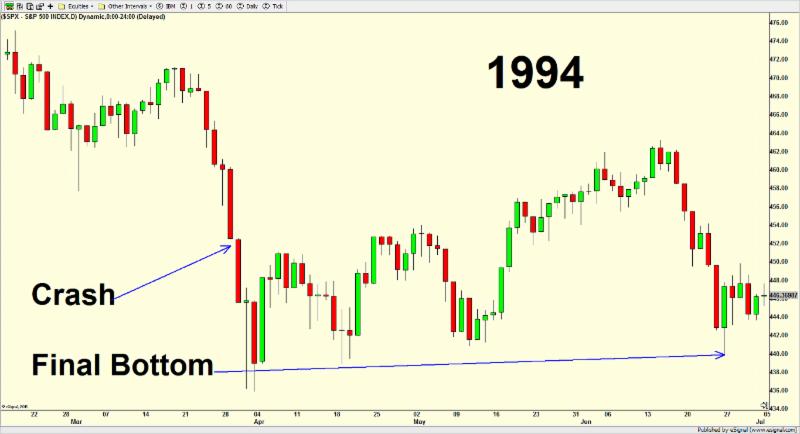 1989 has some similarities to 1997 in that it was essentially a one day outlier decline based on the leveraged buyout craze imploding with takeovers in United and American Airlines falling apart with Donald Trump involved. The bottoming process was fairly quick and not very painful with the final bottom occurring roughly four weeks later. 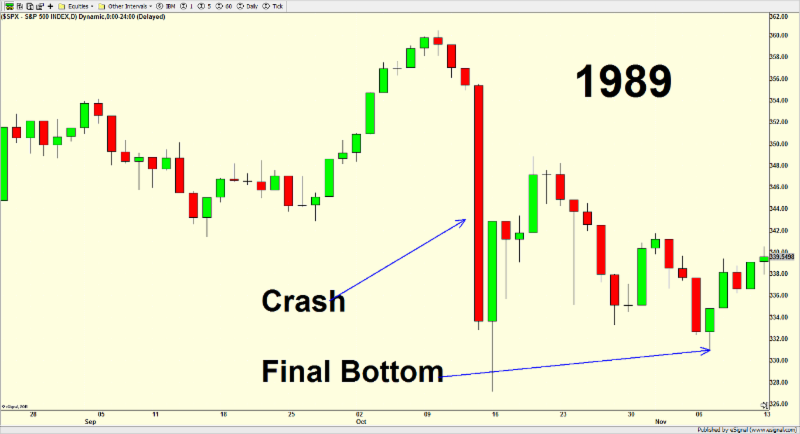 Finally, the greatest crash of the modern investing era was seen in 1987. Similar to 9/11, most people remember where they were and what they thought as the day unfolded. I recall my father launching a new discount brokerage business that very day. While I thought the timing could not have been worse, he often said that it was perfect since none of his clients lost any money on that day as there were no clients yet!

As with most of the other crash periods, the final bottom was seen some weeks later, six in this case. 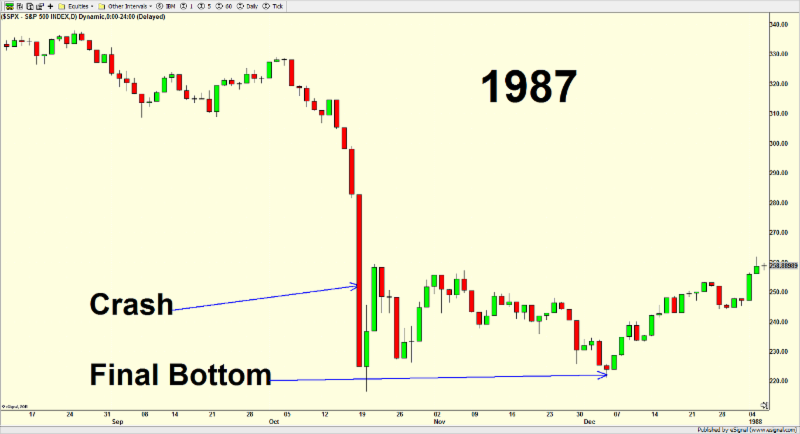 Crashes, mini crashes, crashettes are all very emotional events. The most panic is typically seen during the crash when the market makes its internal or momentum low. There is usually a rally and subsequent final bottom some weeks later. The only caveat I will add is that the more pervasive the sentiment towards this behavior, the more the market will morph and confound the masses.

As always, please do not hesitate to contact me directly by hitting reply to this email or by calling the office at 203.389.3553.