Let’s start with my conclusion. The U.S. is not in recession as I think I have stated every month this year. Yes, I know the government just released its first look at Q2 GDP and it was negative for the second straight quarter. And if you consult Webster’s dictionary, that’s the definition of recession. But since when is Webster the end all be all arbiter?

Lots of pundits believe the U.S. is already in recession. I have not been among them. Not many economists believe the U.S. is in recession. Yes again, I know I am supporting a group I often like to poke fun at, like weather forecasters. Parts of the yield curve already inverted. And I do know that a whole host of data like the leading economic indicators and housing point to weakness. I did see AT&T take a $1 billion charge because customers weren’t paying cell phone bills. I know auto loan delinquencies are jumping. I think the only recession that never saw back to back negative GDP quarters was 1947, but that doesn’t mean we are in recession now.

Coming into 2022 I thought the U.S. would avoid recession. While my view is certainly being tested, let’s remember that back to back negative quarters of GDP growth does not equal recession. Some call it a “technical recession”. The official keeper of recession calls is the National Bureau of Economic Research (NBER), a non-partisan, private, non-profit group founded in 1920. This is not a PAC or Super PAC or group driven by political agenda or party.

What ensued was hundreds, if not thousands, of replies and personal attacks with the vast majority being partisan and frankly, dead wrong. Since when did economic data become political? It made me sick when people openly rooted for and celebrated recession in 2020 as a way to get rid of Donald Trump. It is equally reprehensible and despicable that people are arguing and celebrating today’s weakening economy as a way to get rid of Joe Biden. Love the president. Hate the president. Their success is success for the country. Recessions mean hardship and pain for Americans, both Republican and Democrat alike. Shame on anyone who enjoys that. It’s disgusting.

Anyway, back to the topic at hand. First, the obvious indicator, employment, a notoriously backward looking and lagging data point. No recession has ever occurred without an uptick in the unemployment rate. Today, that number sits at 3.6%, close to a 50-year low. I absolutely believe the unemployment rate is bottoming right now and will trend higher to at least 4% in the coming months.

The economy created 372,000 new jobs in June. The detractors are all over the employment numbers as being “fake” which is nonsense. They argue that until the economy exceeds pre-pandemic level of jobs, it doesn’t count. It’s just workers going to back to work. Um, no. That’s not how economics works. That’s like saying there can’t be a new bull market after a decline until the market is at fresh all-time highs. Completely absurd. I remember the recovery after the financial crisis being called “the jobless recovery”. What would that make this recession? The full employment recession?

People also argue that because people left the work force during COVID and are now coming back because of inflation that’s also recessionary. Huh? COVID clearly accelerated a strong demographic downtrend in the percent of possible workers in the labor force. But that trend began in 2000. As you can see below, Labor Force Participation Rate is not predictive of recession nor correlated with it.

Before I share two off the beaten path economic indicators, please don’t forget about the two videos I did where I explained what recessions are, how they are declared and what the next recession may look like. VIDEO #1 VIDEO #2

Below is the ABI which is tracks non-residential construction from the architect industry point of view. It is said to have a strong 9-12 month head start on future weakness in construction and presumably the economy. An index level above 50 is expansionary and below shows contraction. For now this indicator does not confirm recession, but it looks like it’s on the way later this year. 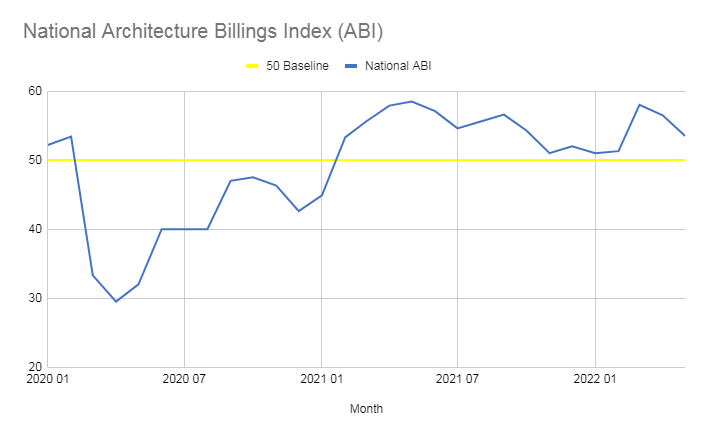 Below is the RPI which tracks restaurant activity and a good barometer of the consumer.We all know that once the economy reopened and the massive stimulus got into Americans’ hands, people went out in record numbers. The index peaked at 106 last year and has since sharply tailed off through June. However, it remains above 100, for now, and that’s still expansionary. Later this year, the RPI should fall below 100.

Again, I am not saying that recession isn’t coming. I simply said that I do not believe the U.S. is in one now just because we have back to back quarters of negative GDP growth. I think it’s possible that a mild recession hits in late 2022 or early 2023. If so, that would look like 2001 or 1980. In both those cases, the mild recession was uneven and targeted. Not all sectors felt pain. Today, we know that tech is in the crosshairs and has already started hiring freezes and layoffs. We know housing is under pressure, especially in housing starts and new home sales. At the same time travel and leisure is booming as consumers start to burn through what was $2.5 trillion in excess savings at the start of the year.

In the end whether I am right or wrong about the timing of recession it doesn’t impact how I help clients plan for retirement. Recessions come and go and I factor that into their projections. Am I going to shift portfolios because we now have back to back negative quarters of GDP growth? That makes me laugh out loud. Of course not. The S&P 500 did not plunge almost 24% because the economy is going to be strong. The NASDAQ didn’t collapse 35% because prospects for the tech sector are rosy this year.

The end to a crazy busy news week in the markets. Looking forward to a weekend without oppressive heat and humidity. The drought is getting bad in Southern New England and my favorite beech tree’s leaves are browning up and dying despite my constant watering. It’s depressing and there’s no relief in sight. And in May we were worried that the rain would never end. Ski season is just over 100 days away being the optimist that I am.