September 11th seems to sneak up on me each year. This year was worse as the country is still dealing with the Corona pandemic and the overall heightened state of affairs. With kids going back to school, Labor Day and the start of the NFL season, it feels like I wake up and realize 9-11 is either the next day or very close by. I wasn’t around when Pearl Harbor was bombed but I know everyone from that generation remembers exactly where they were when it happened. My generation has the same memories of 9-11.
I vividly remember watching TV in my office having just returned from Florida the night before where we debated staying one more day to get an early round of golf in on September 11th and then fly home after lunch. I was the party pooper in the group as I had been away for several days and I had my own two bachelor parties coming up with my wedding just under 5 weeks away.
Anyway, I was sitting at my desk when news broke that a plane had hit the WTC. I kept saying that it had to be false because there was no plane on the ground. I kept thinking that it had to be a little Cessna or small prop plane, never even contemplating a full scale commercial jet due to the unthinkable. As the second plane and video footage was released, word quickly spread that this was terrorism of an unfathomable magnitude.
Teri & I were getting ready for our wedding at that point and we vividly remember exchanging AOL emails on what we thought was just a little “accident”. The stock market index futures were selling off after the news broke. I thought, “what a great buying opportunity”! I mean, why would people sell stocks because a little Cessna plane had accidentally flown into one of the towers.
Then the second plane hit and people immediately had footage. I remember standing in my office in disbelief. Speechless. Shock. I had friends in the WTC.
As the day continued to unfold, people in my office park kept coming in to my office as we were the only ones with TV. I think everyone felt comforted to be surrounded by others. “I can’t believe this” became the refrain of the day. Over and over and over.
I later learned that I lost my childhood and high school friend, Chris Murphy, along with a college fraternity brother, Charlie Dolan, whom I did not know well. We all lost someone directly or indirectly. The stories began to pour out of those who were supposed to be in the WTC that morning or who turned around because something else happened. My good friend Alison got out of the taxi a little before 8:30am on that day for work in front of the towers. She realized she forgot important work at home and turned right around and headed back to her apartment. She was one of the lucky ones. Her boyfriend worked for Cantor Fitzgerald and he was tragically not.
In my travels over the years, I have met a number of people who got out. They talk about being covered is dust and debris, struggling to breathe and running for their lives. Few went back to work in New York City. All were profoundly changed forever.
I still get angry when I hear that schools either do not teach about this unspeakable attack or refuse to show TV footage to the kids for fear that it may hurt the children. “Those who cannot learn from history are doomed to repeat it” – George Santayana
One thing the terrorists miscalculated, the American spirit and resolve. This unspeakable attack brought the country together like hadn’t been seen in many decades. Our country longs for that attitude, bond and perseverance today. No one was prepared to let evil win.
Never forget…
In remembrance of those who perished at the cowardly hands of murderers, we will be donating what amounts to today’s firm profits to a fund for the benefit of those families directly impacted. 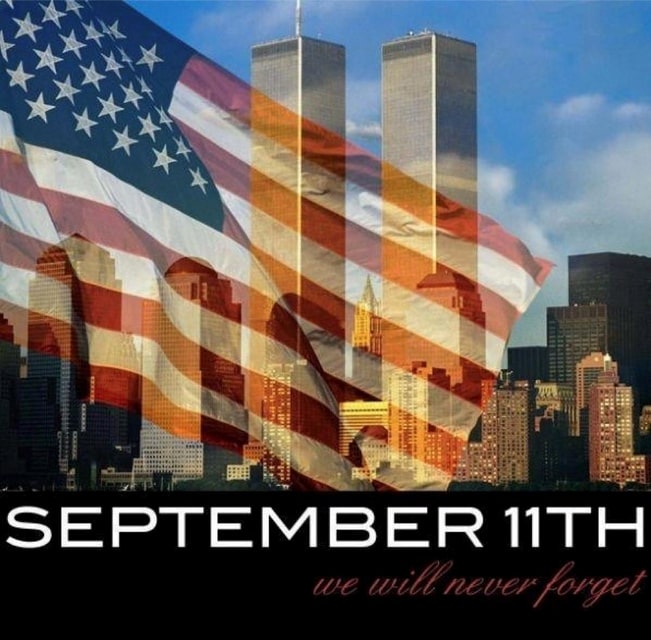