It’s Friday of a holiday-shortened week and even more so for me as I spent Tuesday and Wednesday in New Orleans with some fellow UCONN crazies eating, enjoying a few adult beverages, playing golf and watching the women dismantle Tulane, my wife’s alma mater. It was a good break from winter in New England, but Mother Nature seems to have lost her ferocity up here and it’s been more like March and April. 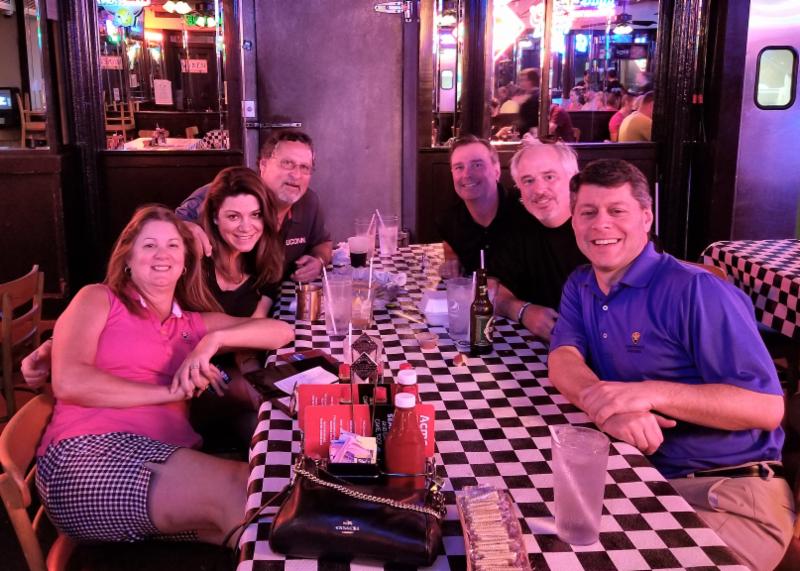 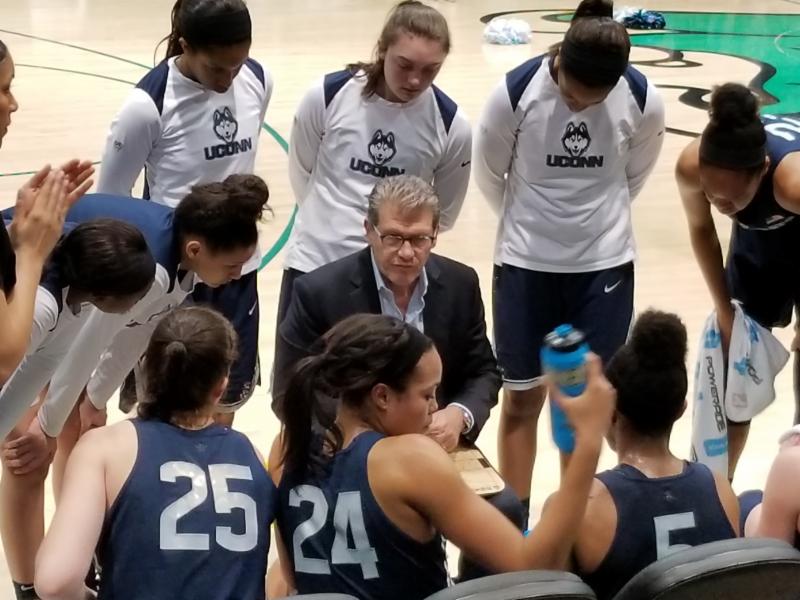 Speaking of my wife, Teri, I want to wish her the happiest of birthdays and the best year ever ahead! She’s my best friend, love of my life and most incredible mother, even when screaming at our teenage daughter. Until death do us part, or she kills me…

Tulane passed out these BEAT UCONN towels, so of course, we accepted ours. We took a bunch of pics holding these and all but the one below had us both looking at the camera with a somewhat normal pose. This one, however, pretty much describes our relationship. I am the jokester who starts everything and she joins in, almost in disbelief of feeding my immaturity. Anyway, the towels made great napkins for the muffuletta from Central Grocery. 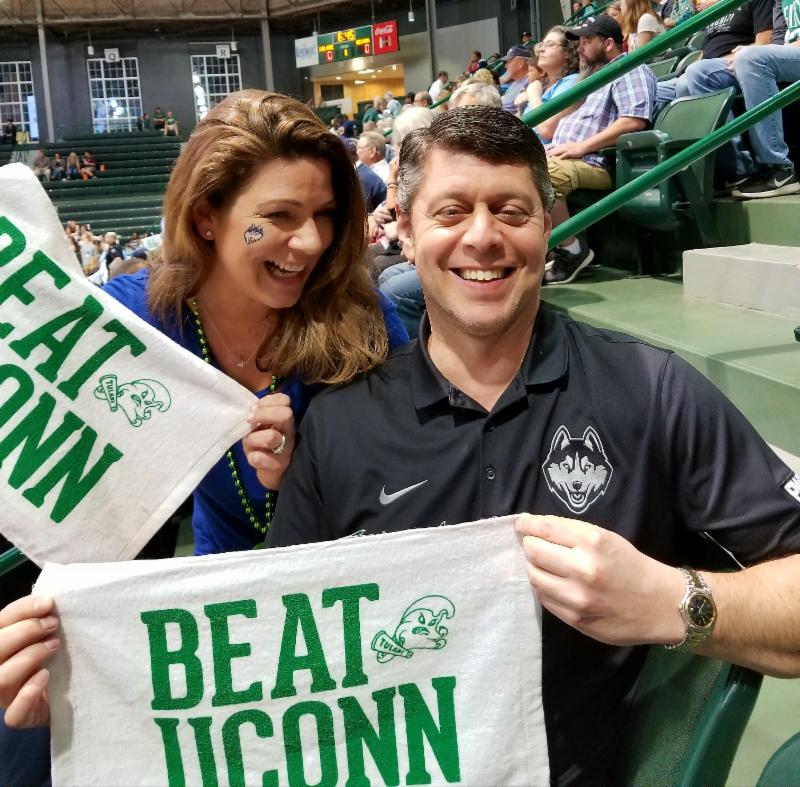 Before I send a full canaries in the coal mine which will be print very long because of all the charts, I wanted to send this update on what’s becoming two very familiar charts. The first one below remains my preferred scenario which calls for the rally to end, well, right about now with a return to the bottom of the volatility range in March. My initial downside target is Dow 23,000. From there, I see a very strongly rally to all-time highs with Dow 27,000 by the end of Q2 and a shot at 30,000 by Labor Day.

How will I be wrong?

If the Dow closes above the top of the volatility range which is essentially above last week’s high, I think this scenario will move down to number two on the list. Let’s call that Dow 25,500. 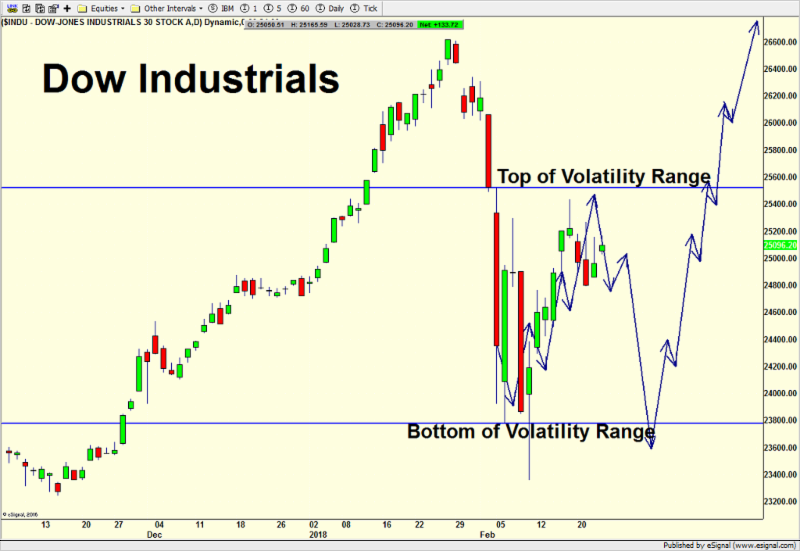 The other scenario I have offered is below and would move to number one if the Dow closes above 25,500 this month. This one calls for the bottom to be in with only mild weakness before closing well above the top of the volatility range on its way to Dow 27,000, all-time highs, sooner than later. 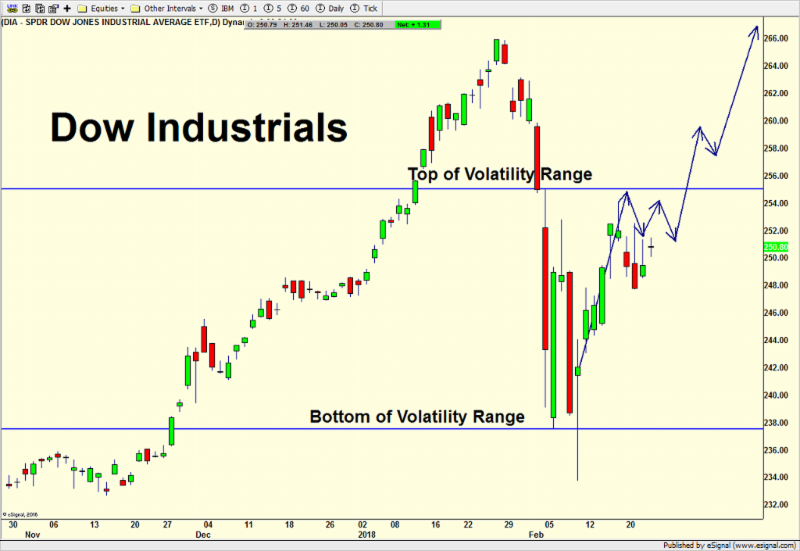 Both scenarios being offered end with new highs and at least Dow 27,000. The bull market remains alive and reasonably well. If the first scenario plays out, you can bet that the masses will be calling the end of the bull market right around Dow 24,000.

A few additional things of note. First, the rally in stocks has not been with enough enthusiasm. There doesn’t seem to be strong conviction. While there is no rule saying there absolutely has to, it does give me some background concern. Maybe a day where 90% of the volume is in advancing stocks is coming next month, or even two with 80%.

Stocks sold off into the close last Friday, the day before a holiday weekend. That’s atypical and suggests that all is not perfectly well. However, several times I said we need to watch which groups lead the market higher off of the bottom. So far, banks, semis, software, internet, discretionary, materials, biotech and healthcare have been leading. In other words, strong “risk on” sectors which usually lead a healthy advance.

On the flip side, staples, telecom, REITs, utilities, energy and transports have all lagged since February 8. The first four are all defensive in nature and healthy to lag at this stage. The last two are somewhat of a head scratcher as lower energy is good for transports but transports are very economically sensitive.

Stocks are approaching a critical juncture. Next week will be key.