Well, well, well. Just when the bulls got to the point of no return, not really but it sounds good, they staved off a losing battle with the bears. Funny how that happens sometimes. If you watched my interviews on Yahoo Finance or TDA Network, I was pretty firm that I still thought stocks were bottoming right now and the year-end rally would still come albeit in an underwhelming fashion. And that how I played it with portfolios as we did an avalanche of buying during Thursday final swoon.

To be clear, my position now is that the stock market has bottomed and should rally into January, led by small cap stocks. That is what is supposed to happen. If the stock market reverses lower before 2022 it will likely knife right through the November and December lows in a messy fashion. That would not be good nor bode well for Q1 2022. Again, that is the less likely scenario and we should see fresh all-time highs this year. I hope that is crystal clear.

I have already listed the myriad of reasons for forecasting the year-end rally which may also morph into the Santa Claus Rally. And contrary to what some like Jim Cramer report, the traditional SCR begins this year at the close on December 23 and ends at the close on January 4. There is no debate as one guy on Twitter was trying to do. The SCR is what it is. Yale Hirsch of Stock Trader’s Almanac fame coined the term and invented the trade. Period. End of story. More on the SCR next week.

I do love the questions asking me why I believe something or what evidence I can point to. Let me start with sentiment. Below you can see the percent of bears in the individual investor survey. 42% and now 39% which is certainly enough for a trading rally, but a major low. 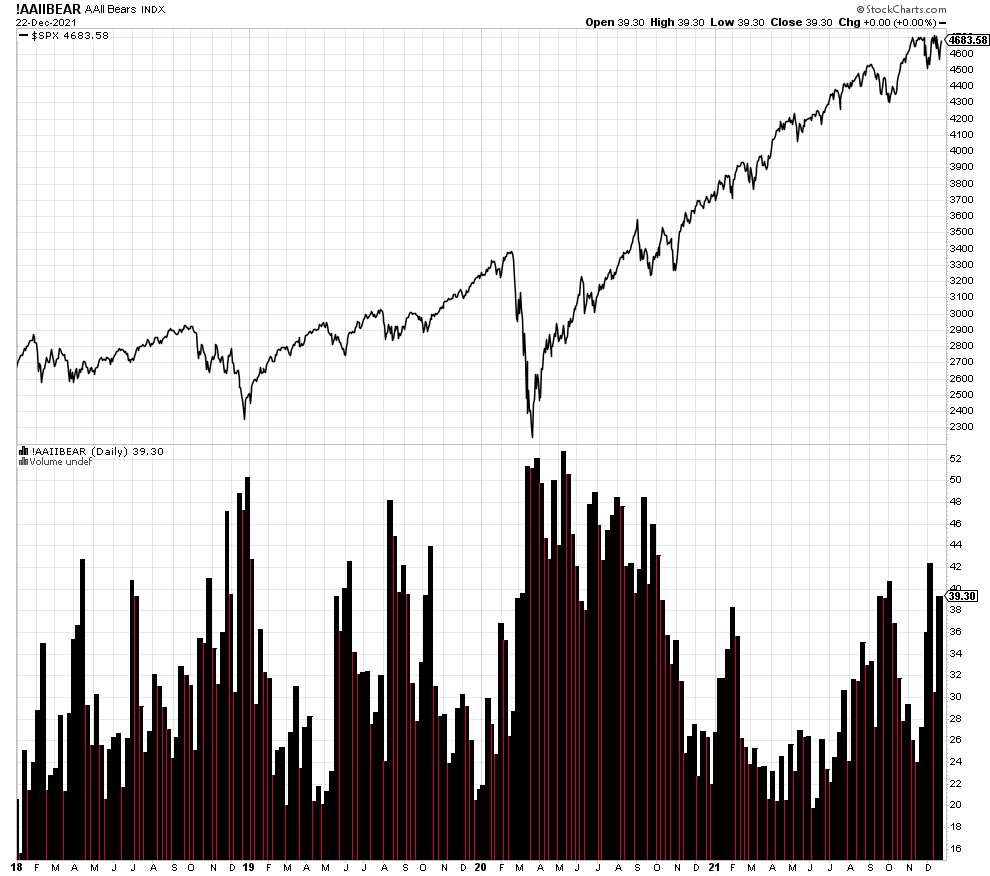 Next, let’s go to the percent of bulls in the survey which has fallen to a low number of 25. That serves as fuel for a rally. 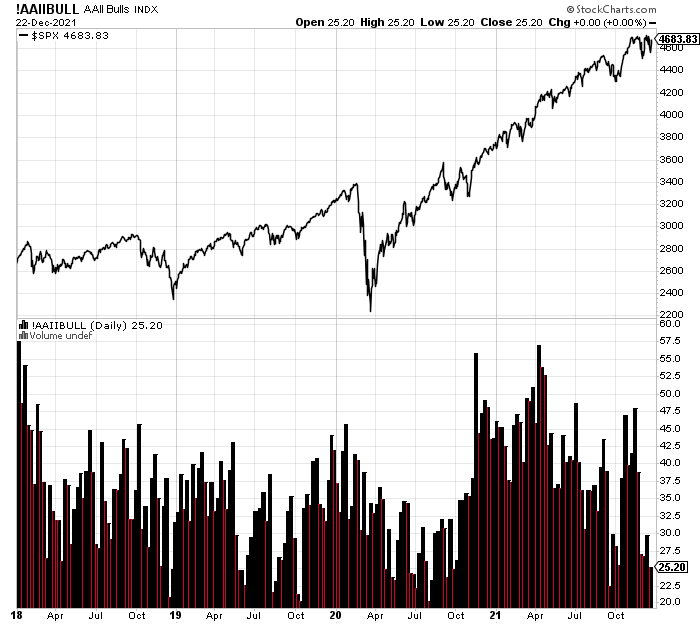 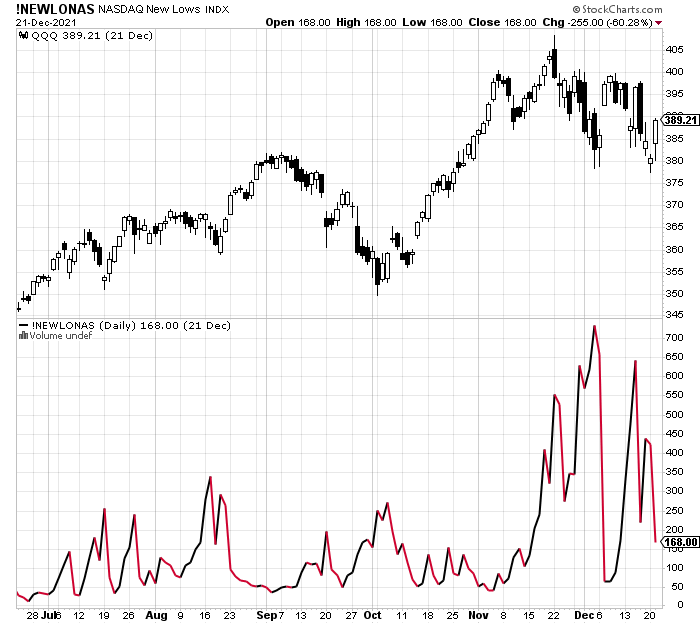 Take a look at the explosion in up volume on Tuesday below. Almost 87% which means there was a bit of a buying thrust off the bottom. 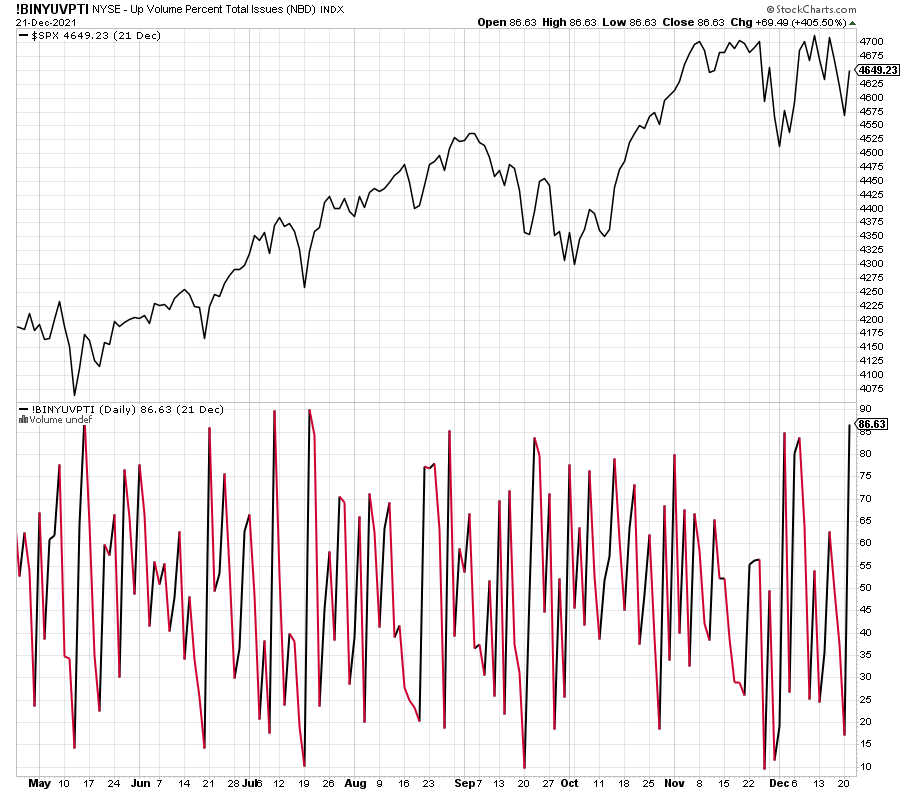 I could go on, but I think you get the message. I am not saying that we just saw a major or meaningful bottom. I am only saying that there is enough evidence to support at least a short-term or trading low to launch the year-end rally. There are some structural issues which concern me over the intermediate-term and they may dictate curtailing risk in 2022. But, we will cross that bridge when we get there.

On Monday we bought more biotech, small cap growth, BHP and Cathie Wood’s ARKK. We also sold the Dow Industrials, S&P 500 and MTUM. On Tuesday we bought FREL and harvested the last of our 2021 tax losses.