Here we go.
I remember writing about impeachment in 1998 and hoped and prayed the country wouldn’t have to experience this kind of political circus again. It took 21 years, but the circus is back in D.C.
Thankfully, since we only have two prior, modern day instances of impeachment, stock market results are certainly not statistically significant. Given that, however, let’s take a look at the environments surrounding each of the prior two along with where we are today.
First, let’s look at Richard Nixon in 1973. You can see on the chart below where the “official impeachment inquiry” began. At first glance, it certainly looks like the stock market unraveled immediately following the inquiry. However, correlation is not causation. In other words, just because it looks like one thing is tied to another doesn’t make it so. It’s like saying that at the stock market peaks in 2007, 2000, 1990 and 1987 sharks migrated west to east instead of north to south. Or that the path of the stock market is moving tick for tick with the migration pattern of wildebeests. It’s just coincidence. 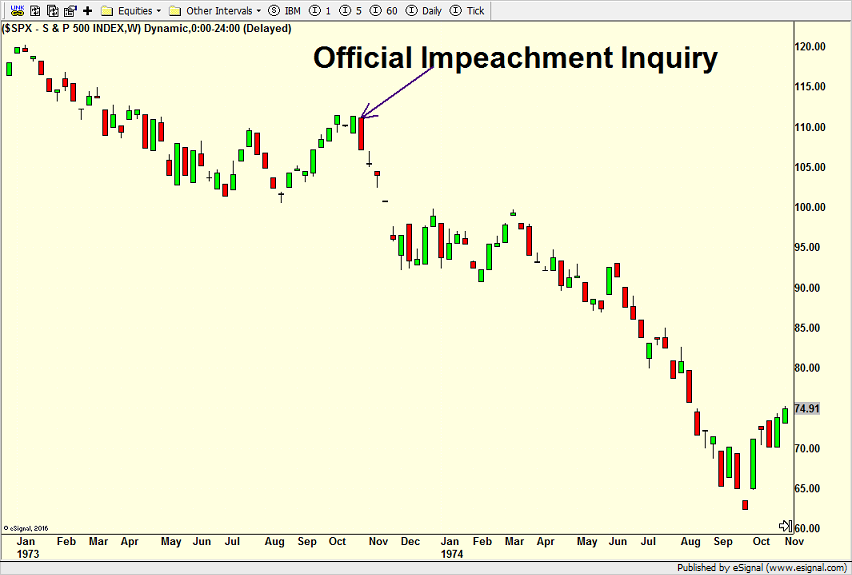 The macro picture in 1973 was very poor. The U.S. was heavily dependent on foreign oil and OPEC began production cuts in October 1973 against all nations they perceived to be supportive of Israel. The embargo continued in late 1974 and oil skyrocketed 400% leading to a global recession.
While the stock market looked like it was strong right into the peak in early 1973, that was the time of the Nifty Fifty, 50 stocks that were soaring while the rest of the market had already rolled over into a bear market. At the peak in January 1973, more than 50% of stocks were already down 20%. In short, the stock market’s foundation had crumbled, but the house was still standing.
I would strongly argue that the stock market would have seen the exact same results had the Watergate scandal happened or not. If you want to push back a little, maybe I would cede that a single digit decline could have occurred, but certainly nothing like the carnage from the oil shock and serious recession.
Let’s turn to 1998 when Bill Clinton was impeached. Below, you can see the official inquiry began in October 1998 at the end of the stock market’s 20% decline. Some would very wrongly argue that the threat of impeachment weighed on stocks. In 1998, stocks collapsed in August as Russia defaulted on her debt. After a brief bounce, they fell once again when hedge fund, Long Term Capital Management threatened to take down the entire financial system with their staff of Nobel prize winners and 100x leverage on bets that a 1 in a 1000 year storm wouldn’t happen. 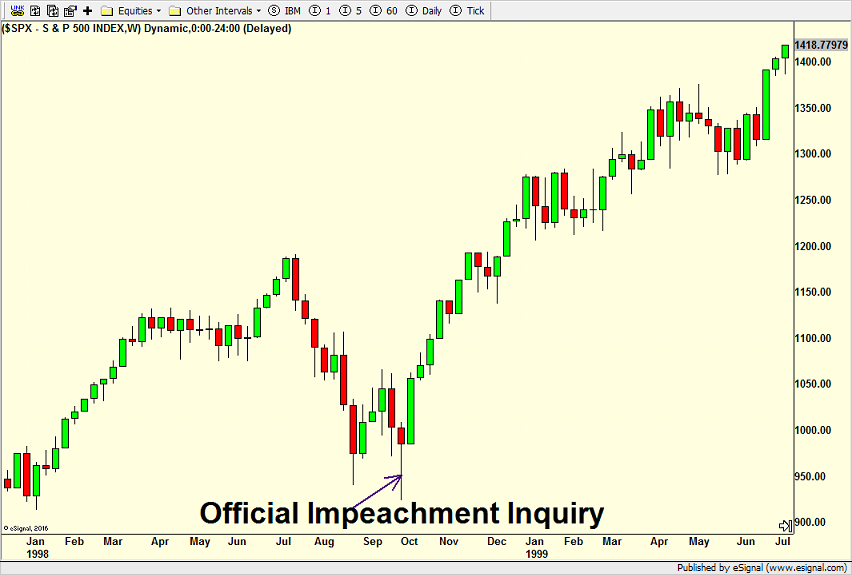 Unlike 1973, the economic backdrop was much more constructive in 1998 as the Fed slashed interest rates and created a Wall Street consortium to bail out the imploding hedge fund. GDP growth never missed a beat, continuing to click at 4%+ until the end of the century. The stock market was already at the end of the bottoming process when the impeachment inquiry became official in October 1998. Stocks literally soared like a rocket ship from that point as the Dotcom Bubble was just beginning to inflate.
I feel very strongly that Clinton’s impeachment had almost zero stock market impact because the market had a strong base and there was almost no chance of him being thrown out of office.
Where are we today?
Today’s economic landscape falls somewhere between 1973 and 1998, however the geopolitical backdrop is much more stable than 1973 and more closely resembles 1998. Economic growth is “fine” and I don’t see an imminent serious threat. Yes, I still believe a mild recession is coming next year, but nothing like we saw in the 1970s. The tariff tantrum may seem like the biggest concern on the surface, but with an election just around the corner, Trump will almost certainly capitulate before jeopardizing the economy. 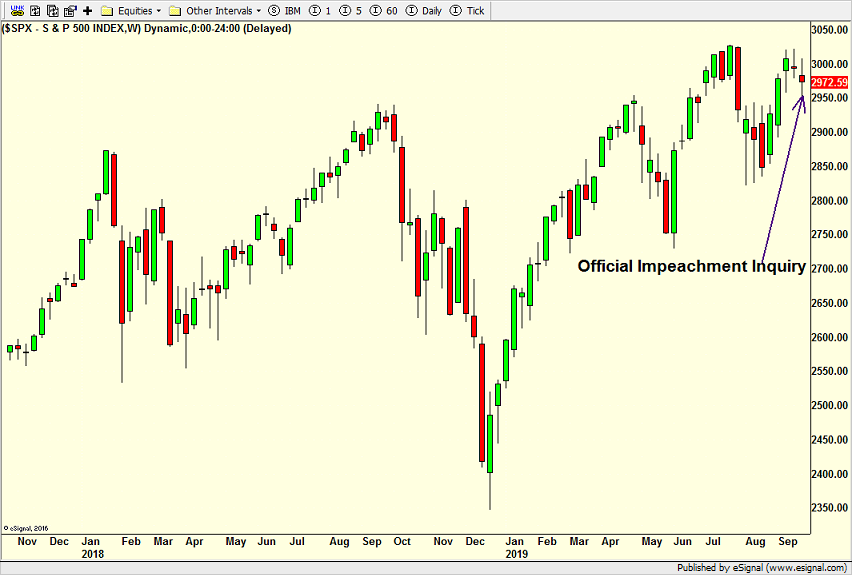 Looking at the stock market, it is also somewhere in between 1973 and 1998. While price is near an all-time high, the foundation remains very solid and stable which is more like 1998. We see high yield bonds near all-time highs and the New York Stock Exchange Advance/Decline Line is also close to all-time highs. This tells us that any and all declines are buying opportunities.
So far, the threat of impeachment has had no effect on stock prices. And unless a “smoking gun” appears and Senate Republicans begin to jump ship, I continue to believe that the stock market will proceed higher to Dow 28,000 and perhaps 30,000 in Q1 2020. Impeachment makes for sensational headlines, drives people to the media and creates an even bigger country divide, but I believe this will be the third time without market impact.