In what seems like the longest election season in the history of the world, the end is hopefully near on Tuesday although after 2000 and the endless surprises this year, that’s certainly not set in stone. Let me begin by stating that almost none of what I write in this report reflects my own political views. They are 100% irrelevant. I will do my best to keep that sort of editorial for another time.

As I have often mentioned over my 28 years in the business, what is popularly held as the truth does not often stand up to scrutiny when real research is done. For example, most people believe that gold is a good hedge against inflation. Or, the stock market doesn’t do well with a rising dollar. Neither one is correct when looking at the data over the long-term.

As election polling has dramatically changed over the years, so has its usefulness. Not only have the old tried and true polls gone the way of the Edsel, we now have a slew of new, high tech, quant-based ones with very little history and even less in the way of accuracy. Look no further than the recent BREXIT polls’ strikeout in the UK regarding leaving the EU to realize that many polls have lost their effectiveness.

When it comes to presidential elections in the U.S., the stock market has been a more accurate predictor than any poll or pundit I have found over the years. To that end, as I do with so many things in my life, I have developed several models which help determine who our next president may be. Thanks to my friend and newsletter writer Tom McClellan for his work on the topic and giving me ideas on how to model.

For the past few months, I have used Dow 18,000 as the general level to watch. The higher stocks trade above that level, the more likely Hillary Clinton would be our next president. The lower the Dow trades below 18,000, the more likely Donald Trump becomes our next president. Interestingly, as the polls have swing wildly since the DNC convention, stocks have basically held 18,000 as the area of equilibrium.Based on data that will drop off today and Monday, the model says that Donald Trump will become our 45th president, which certainly runs counter to what the polls are current indicating.

Now, a few words of opinion. Based on the electoral map, I still cannot see a path to a Trump victory, 270 electoral votes. He would need a Truman-like outcome, but again, that’s a personal view not based on the research.

Should Donald Trump win, I don’t agree with the fear mongers like that windbag, Mark Cuban, that stocks will collapse. For months, I have said that if Trump wins, stocks will be declining into Election Day and bottom shortly thereafter for a rally into January. I still believe that today.

If Clinton secures the Oval, the markets should see a quick rally unless the democrats sweep Congress as well. That would not be good for stocks now or possibly over the intermediate-term. Believe it or not, the markets root for gridlock in Washington so one party can’t screw things even more than they already are. A mixed government ensures that nothing too far left or right will be accomplished. And when something is, it will truly be bipartisan like we saw with Bill Clinton and Newt Gingrich in the 1990s and Ronald Reagan and Tip O’Neill in the 1980s. Most people won’t argue with those market or economic outcomes.

You will notice that I didn’t write the same thing if Trump wins and Congress remains in the GOP’s hands. Given his political leanings, I don’t think a President Trump will simply rubber stamp the GOP’s agenda nor do I believe that Congress will give him the agenda he wants either.

Looking out past 2016, I believe the markets will perform better under Trump than Clinton. Trump seeks to cut taxes and probably raise the budget deficit. Clinton aims to raise taxes as a means to pay for her programs. Historically, stocks have done better with rising budget deficits and a lower trajectory taxes.

I wish I had done research on which sectors would be helped and hurt by each candidate going back decades. Since Clinton’s tweet on September 21, 2015 where she attacked drug pricing, the biotech sector has never been higher. Since then, I started using that sector as a proxy for a Clinton victory. As you can see below, the sector has been brutally bludgeoned over the past year, losing 30% as well as almost 20% since mid-September. Clearly, investors have been preparing for a Clinton presidency for some time. Additionally, I think that regardless of who wins, biotech may offer some strong upside sooner than later. 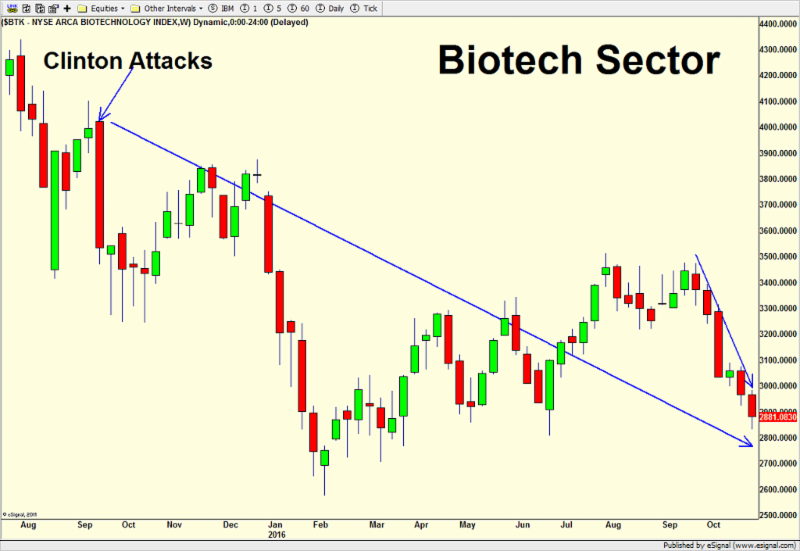