My last two updates focused on the stock market’s mini crash and the reliable historical pattern that typically ensues, including what I saw as the somewhat predicable Turnaround Tuesday where stocks reverse early losses after selling off sharply on Friday and Monday. I was looking for that “woosh” lower early Tuesday and while down 600 wasn’t the magnitude I wanted to see, it was enough to flush out the remaining sellers and entice some buyers in. The worst may be behind us, but the is not over.

You can read those updates below.

As I mentioned previously, short, sharp market downdrafts from all-time highs have not led to bear markets nor major declines. They are scary “market events” where the volatility Genie exhibits chaotic behavior for an extended period of time. She doesn’t just go right back into her bottle.

In this case stocks saw a mini crash, more in point terms than percentage. Intra-day moves were extreme, are extreme and will continue to be extreme, likely into April. Investors should get used to triple digit moves every day with bi-polar behavior. Again, we have probably seen the worst of the volatility but it’s certainly not over. Eventually, things will settle down.

Let’s revisit my most likely scenario chart below with the arrows redrawn to line up with the magnitude of the move. First, look at the two horizontal blue lines which represent the short-term trading range I see setting in, bound by the two most volatile days’ high and low. 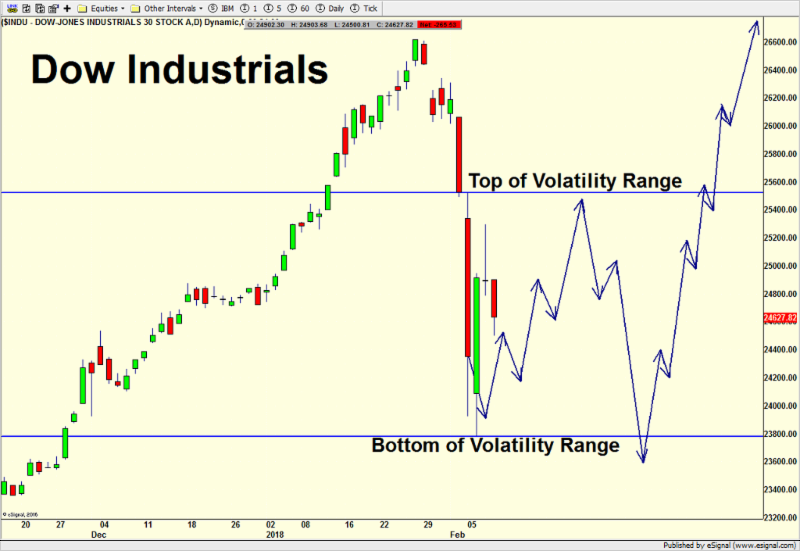 Stocks should bounce between 25,500 and 23,800 into March at the latest although they could compress this scenario and have it end this month. Weeks down the road, the stock market is likely to see another decline towards, at or just below the worst levels from Tuesday morning. However, that decline should come with much less acceleration, volume and participation. Assuming the market holds there, a multi-month rally to all-time highs will ensue.