BEWARE! – Stocks (Gamestop) Can Stay Irrational Longer Than You Can Stay Solvent

The stock market looks to open bright red today, something we haven’t seen in a while. Are short-term traders prepared? No way. I am guessing that even a mild to modest single digit decline will have most of them under their desks, sucking their thumbs in the fetal position.

Look, the market has seen epic greed and euphoria since early November. However, the foundation of the market has been very solid until the past week. The theme over the past few days or so has been a good, old fashioned short squeeze, or raiding of stocks where big institutions have bet heavily against. Remember, short selling is the exact opposite of buying. One is playing for a stock to go lower as you sell something you don’t own and hope to buy it back at lower prices.

There is a decades old strategy of buying stocks with huge amounts of short sellers against. The theory being that eventually, short sellers will have to close out those positions by buying the stock back. It has mixed results long-term. However, when the market, or in today’s case Reddit, targets a stock or two, the snowball can get going to the upside and create a squeeze for those betting against the stock.

Let’s look at Gamestop, GME, today’s stock in the news. More than 100% of the outstanding shares were short sold. That’s an insane amount. Supposedly smart investors know the company’s fundamentals are weak and getting worse. 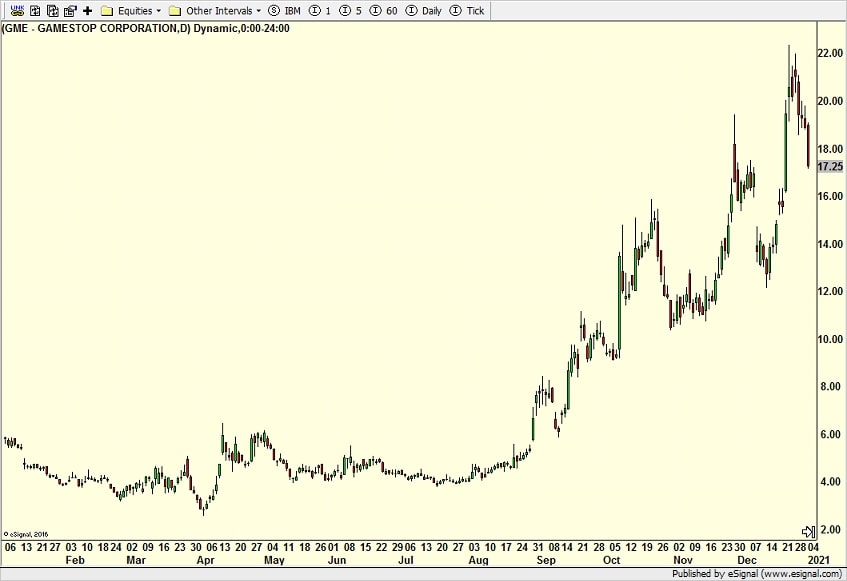 10 months ago, the stock was roughly $3. By year-end it had soared to $20 as you can see above. That is some move. But that’s not the real story. At some point this month, the stock became Dotcom’esque in its interest on message boards. I have no idea why or who. From $20, GME more than doubled in two days as you can see below. 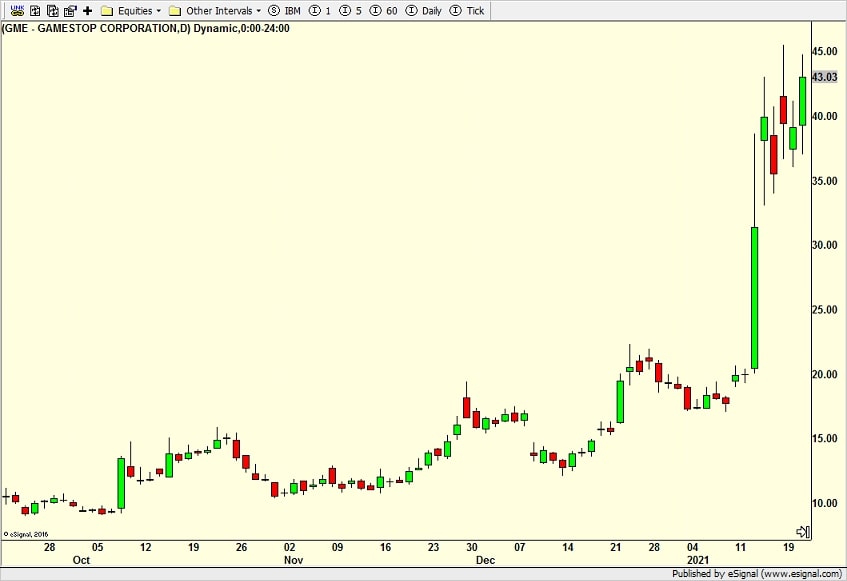 That’s where the fun really began and not ended as most would think. Reddit became the hottest stock forum in the land for people to chat and tout. Hedge fund names circulated with chatter about funds blowing up who have been short the stock. That caused more and more speculators to buy and some hedge funds to throw in the towel and buy back stock they short sold.

Take a look below. After more than doubling to $43, Gamestop shot to $160 yesterday (Tuesday) and I am sure lots of body bags were ordered for hedge fund traders and portfolio managers. Can you imagine betting against a stock somewhere in the teens and then seeing it literally go vertical against you to $160?

That’s what happens in commodities not stocks. I know because once upon a time in the 1990s I was short an ag commodity that went limit up three days in a row, meaning it was up the max day after day after day and I could not get out. My losses were potentially limitless. 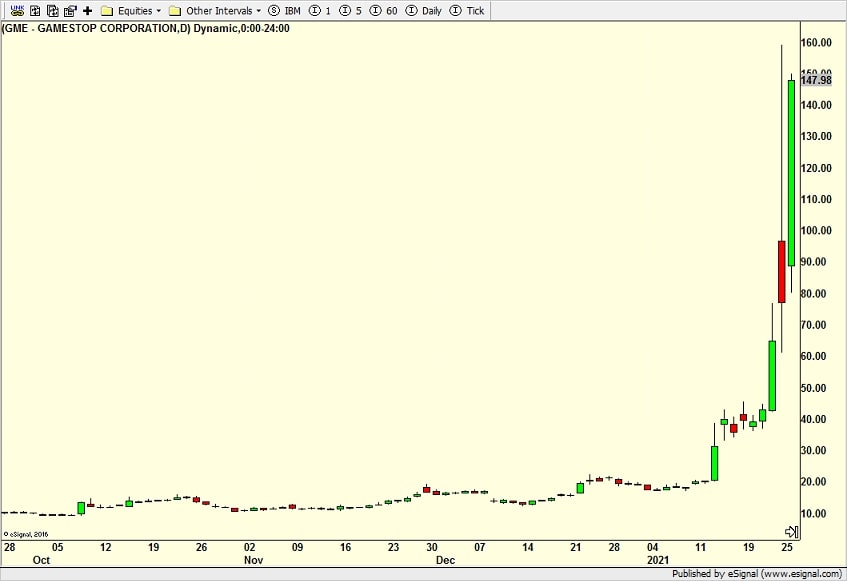 So this week, I asked on Twitter what risk management process these hedge funds were using to be short a stock that was acting like a Dotcom. Remember the old adage? Stocks can stay irrational longer than investors can stay solvent? You don’t have to be a genius to know when price action tells you that something is wrong. However, when ego and pride get in the way, you can blow up your fund get carried out in a body bag.

Go Google Amaranth 2006. This was a large hedge fund with a complex and massive trade on in natural gas. Like betting against Gamestop, it did not go Amaranth’s way and the fund blew up and closed. However, the trader responsible for more than $6 billion in losses, Brian Hunter, was only unemployed briefly. Other funds could not wait to hire him.

And as I finish this update, Gamestop is trading at almost $400 in the pre-market! $400 from $20 in less than a month. Sure, there is no greed or euphoria in the market…