Today is Columbus Day, at least that’s what it says in my Outlook calendar. My kids tell me I can’t use that name anymore. Whatever today is called, the seasonal trend is mildly positive. Stocks ended last week on a sour note although they did fill the price gap left by last Tuesday’s big up opening.

The employment data was softer than the prior month but it still came in stronger than expected with the unemployment rate back down to 3.5%. That means the Fed will likely hike interest rates by another 3/4% when they meet the week of Halloween. On the flip side, the jobs market remains very strong, but in a counterintuitive way that will likely lead to more economic weakness in 2023 as the Fed will continue to push. And please, let’s not forget that it tales 6-9 months for Fed moves to filter into the economy. The markets may price them in very quickly, but the real economy does not. 2023 is going to be challenging for the economy, but not so much in the financial markets.

Getting back to the stock market, as I discussed with Charles Payne on Friday, the seeds of a new bull market are being planted right now, but the action last Monday and Tuesday also can be a trap for the bulls in the very short-term. If you want to know how I think stocks need to behave for the bottoming process to proceed, it certainly looks like the major indices need to breach the lows from September as I discussed last week. I went back 50 years and I couldn’t find a single instance of stocks bottoming on the low of the day, let alone the low of the week, month and quarter. That doesn’t mean stocks didn’t bottom, just that the odds are heavily against.

Below you can see the NASDAQ 100 in the top chart with the number of stocks making new lows in the lower chart. Notice that roughly 1700 new 52 week lows were made in January and May, but June and September didn’t even come close. And Friday was only 399. That indicates a less bad market or a market that lacks downside acceleration. 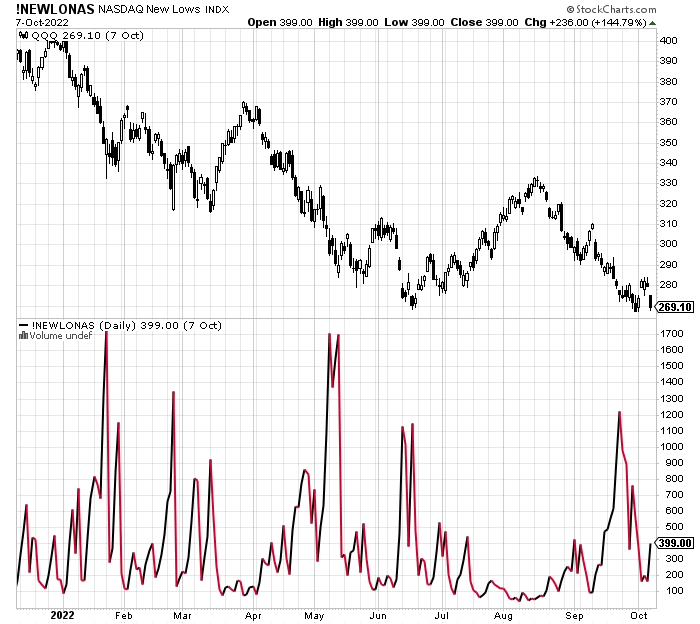 To be fair and balanced, the S&P 500 is below and that not as constructive as the NASDAQ although it is not bad with roughly 1100 new lows in May, June and September. If the S&P 500 breaks to a new low, it would be very helpful for the bullish case if that number holds below 1000. 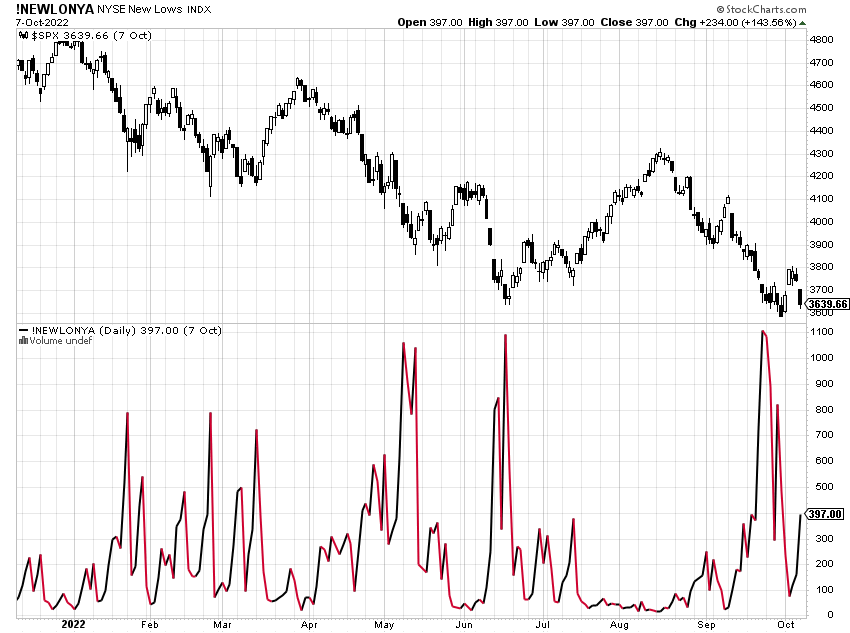 With Friday closing so poorly for the second week in a row, it would be good to see some downside follow through before the bulls put up a stand. That would help to cleanse and shake out the remainder of those who bought on Tuesday. While this is still a challenging market, it is not one without opportunities. There is nothing wrong with planting, pruning and ripping out.

On Friday we bought more SDS. We sold IVW.