It’s hard to argue that the dog days of summer are here. Like so many other expressions (sick as a dog), I had no idea where they came from until Google and Wikipedia were invented. Now I feel so informed.

The major stock market indices have really gone to sleep over the past week. It’s been so quiet. Thankfully, Warren Buffett provided a little excitement after the close on Friday when he disclosed a purchase in Barrick Gold, an industry leader. I chuckled in two ways. First, minutes before the news came out, one of our gold strategies allocated 100% to that sector. Talk about luck. That was similar to one of our high yield strategies allocating 50% to high yield bonds right before the Fed announced they were going to buy them although that also left another high yield having to chase prices higher.

Anyway, I always find these announcements “curious”. The gold stocks had just become oversold for the first time since June. That’s an historically long period of time to not get oversold. And as you would expect, the market is celebrating the news, at  least in the short-term. 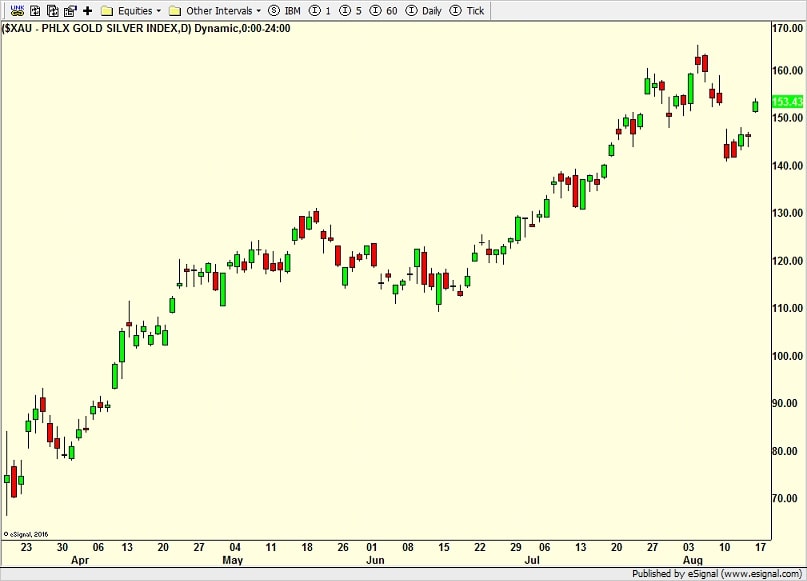 While Buffett’s new holdings usually garner attention, his disdain for gold has been well documented.

“(Gold) gets dug out of the ground in Africa, or someplace. Then we melt it down, dig another hole, bury it again and pay people to stand around guarding it. It has no utility. Anyone watching from Mars would be scratching their head.”

“I have no views as to where it (gold) will be, but the one thing I can tell you is it won’t do anything between now and then except look at you. Whereas, you know, Coca-Cola will be making money, and I think Wells Fargo will be making a lot of money, and there will be a lot — and it’s a lot — it’s a lot better to have a goose that keeps laying eggs than a goose that just sits there and eats insurance and storage and a few things like that.”

“You could take all the gold that’s ever been mined, and it would fill a cube 67 feet in each direction. For what it’s worth at current gold prices, you could buy — not some — all of the farmland in the United States. Plus, you could buy 10 ExxonMobils, plus have $1 trillion of walking-around money. Or you could have a big cube of metal. Which would you take? Which is going to produce more value?”