The First Downside Catalyst of 2021 – Georgia on My Mind

Here we are in 2021 and nothing has changed as the calendar turned. The stock market remains in an epic state of greed and euphoria, the likes of which we haven’t seen since the Dotcom era although January 2017 and 2018 as well as Q4 2019 were close. The market’s foundation was very solid, but there are a number of cracks appearing the lead me to believe we will see at least a short, sharp pullback of 4-8% in Q1. That remains the best case.

Judging by how 2020 closed, there is a trend that says small caps outperform over the coming week at the expense of mega tech and the NASDAQ 100. This flies in the face of momentum which says that the Dow Industrials, S&P 500 and NASDAQ 100 should continue their winning ways as they all closed 2022 at all-time highs. Semiconductors, banks/financials and discretionary all seem poised for more gains early in January with the transports percolating and biding their time.

High yield bonds, one of my favorite canaries in the coal mine, are very extended, but pullbacks can be bought. The New York Stock Exchange Advance/Decline Line, which measures participation, continues its run to all-time highs which should insulate the stock market from a bear market or a major decline. You can see in the chart below with the S&P 500 in the upper chart and the NYSE A/D Line in the lower chart.

The Georgia Senate runoff is the most widely known potential catalyst should both seats flip from red to blue on January 5th. From an apolitical or non-partisan point of view, the markets and economy will likely fare better with divided government, meaning that the Senate remains under the control of the Republicans. Historically, both have done just fine under one party control, but all years are not created equal. With divided government, not much is going to get done and the markets are A-okay with that. With Congress and the White House being blue, there is almost certainty that corporate taxes will rise. Capital gains taxes will rise. Income tax brackets will rise for higher earners. The markets will not be okay with that. However, unified government also means that more stimulus and infrastructure will pass, especially with the queen of money printing, Janet Yellen, set to become Secretary of the Treasury.

Stocks are certainly not concerned about the Georgia runoff. Everything seems priced for perfection. However, I do find it strange that the betting odds have gone from 80%-20% red to 60%-40% red over the past two months. Should stocks react very well on January 6th, I would view that as a selling opportunity. Should a blue sweep occur and stocks trade down several percent, that would be the more difficult scenario to react.

I will close with this comparison. In 2016, citizens of the United Kingdom voted on the referendum to leave the European Union. It was widely expected that the referendum would fail. After all, opinion polls saw the “remain in the EU” several points ahead. And as we have seen over the past 5 years, polls are wrong. Leaving the EU won by almost 4%, a shocking result.

Stocks came into the BREXIT referendum just shy of all-time highs, but certainly without any fear. However, as you can see on the chart below, markets react very negatively with those two very long red candles. Quickly, it became widely expected that a significant decline was underway that would take the stock market back down to the correction lows of February 2016 which you can see on the far left side of the chart. Obviously, that didn’t happen and the bull market immediately resumed. 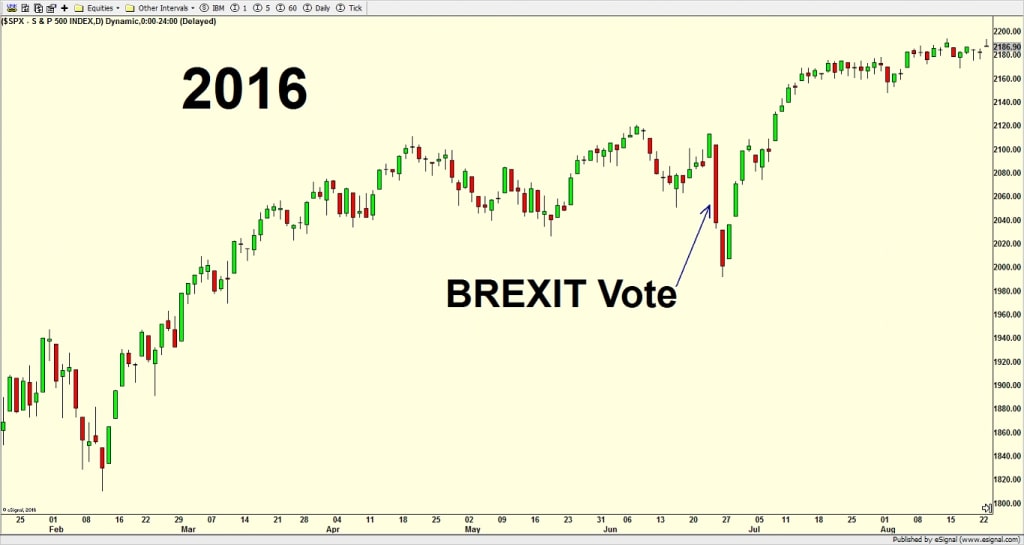