The Light at the End of the Tunnel – Thank You Pfizer!

It was amazing to wake up to see the huge success of Pfizer’s COVID vaccine! 90% efficacy. What a total game changer for the country and the world with hundreds of other vaccines and therapeutics behind that. I know that I will be the first in line when they allow me to receive the vaccine, probably next year. (For full transparency, we own Pfizer which has been a dog for too long.)

Global stock markets are soaring again, but I do not believe this all because of the vaccine news. Last night, stocks were already indicating a big up opening before the Pfizer news broke. This just poured gas on the fire. Remember what happened with the pullback last month? The pundits and media were absolutely convinced that it was because COVID cases were spiking. My readers know that wasn’t the case. In fact, I had very strong conviction that the October pullback was all about election jitters.

To go a step further, I was adamant that the decline was not only one to buy, but one to buy before the election and on the Friday when stocks bottomed as COVID was at all-time high daily rates. And that’s exactly what we did here. We bought aggressively. Since that bottom, stocks have soared in the face of rapidly increasing COVID cases. While the health crisis is truly a tragedy of epic proportions, markets do not really care as long as the economy does not see widespread shutdowns again. That may sound callous and morally wrong, but that is the case.

You know one of my favorite market adages. It’s not what the actual is, but how markets react. I heard from countless people asking about selling everything ahead of the election. That was the top question from the webinar as well. My thoughts were the exact opposite. Blue wave, red wave, purple wave. The markets had days, weeks and months to prepare. And it did.

Our own election model forecast a Biden victory. That was the 7th straight correct forecast. Perhaps the pollsters and networks should use my data and save themselves heaping embarrassment and cost. We don’t invest based on who occupies 1600, but rather what the data says. Let the pundits make fools of themselves on this stuff. I still can count a number of high profile folks who called for the Dow to hit 15,000 this year. That’s why it’s much easier to be a pundit than actually manage money with accountability to clients.

If you recall, I had a few concerns that could derail my extreme positivity. The first was that smart money had gone from heavily buying the rally since March to heavily selling the rally in September and October. They have since lightened up a bit. Since August, I have been worried about the Fab Five Plus stocks in technology. While they are still not out of the woods, the bears have also been unable to make serious downside progress.

Finally, we saw two days last month where 90% of the trading activity was in stocks that were down on the day. That usually leads to more selling unless the opposite happens. Well, during the rally, we saw a complete and total reversal. Heading into today, we saw three days with 80% of the activity in stocks going up. And today will likely be a fourth day. 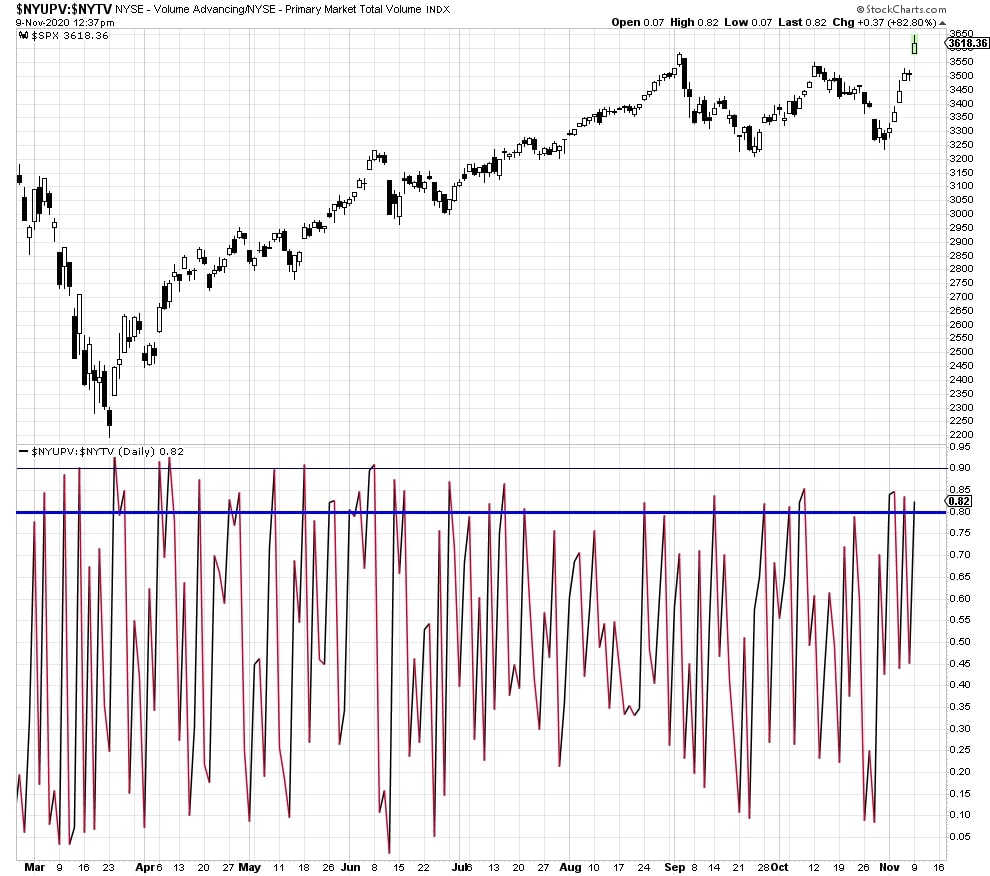 To close, my longstanding target of Dow 30,000 is likely to be hit sooner than later, maybe even this week. The markets have come a long way since March 23!