Two Hole-In-Ones – In One Week

Today and Friday are super strong days on a seasonal basis for stocks. That’s how it is every year around Thanksgiving although certain setups make the days stronger or weaker. With pre-market futures indicating a moderately lower open, we will see if the bulls borrowed some positivity on Tuesday. I do not sense a big down day regardless.

There is certainly enough  bearishness around and it seems to be growing. The other day I mentioned the calls for global collapse. Last night, two analysts I know who are much more realistic, measured and data-based offered forecasts that the stock market has peaked and will be heading lower well into 2022. I will say this, although high yields have behaved poorly lately and concern me, it is very hard to support a strongly negative case with banks and financials so close to new highs and the calendar so supportive. If the major stock indices get going again to the upside and the Russell 2000 finds a low quickly, there will be many investors scrambling to buy equities for a run into year-end. The lines in the sand are drawn and I am sticking with the bullish case.

You may have noticed that President Biden announced the release of oil from Strategic Petroleum Reserves which is the US stockpile of oil held in salt caves in the southern US in case of emergency. If you are bored, plot the price of oil against various presidents’ poll numbers. It’s pretty interesting to see the correlation, especially the slope. Americans hate high energy costs no matter who is in the White House. Anway, oil had been pulling back nicely from $85 to $75 when Biden announced the sale of oil. And oil rallied right on cue from where it was supposed to. Now, there are neat and tidy lines in the sand of $75 and $85 to easily determine who is in charge. Right here, I am betting on the bulls to hit $90. 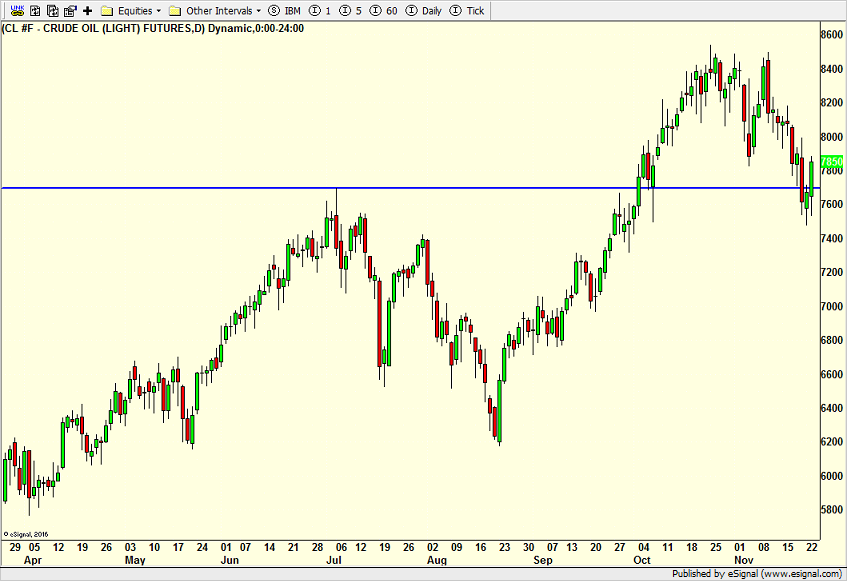 Before I turn to non-market related items, for those interested, we sold Boston Beer and bought St. Joe Paper as well as adding to our sector position in biotech and selling some high yield bonds. I see some opportunities in the metals market starting to shape up for next week.

I love my readers. They come from all over with all different backgrounds, countries, wealth, time horizons, etc. But one thing has been consistent since I started writing in the 1990s; people ask more questions and make more comments about the non-market things I write about that those topics germane to the task at hand. When I used to write full blown Street$marts newsletters pre-pandemic, I always began with a personal section that most folks seemed to enjoy. I need to rethink going back to those letters. Trust be told, the only reason I abandoned them was because our email service, Constant Contact, changed the templates to make it much more time consuming to add charts and pictures.

So many people emailed and texted about my magical trip out west last week. First, many asked how I was able to get my work done, watch the markets and execute trades. Being in the business for 32 years, I have become pretty good at managing my time and multi-tasking. Renee has also been the office manager for more than 10 years and she is excellent at taking direction. In this case, I woke up by 4:30 each morning to bang out three good hours of work and finished each night with 90 minutes. In between, I leave trading instructions when need be and I always have my phone and the markets live, especially when flying where I work from wheels up to wheels down. Coming home being totally caught up eliminates all stress.

It’s so rare that a hole-in-one is made. In my 48 year golf life I think I have seen about a dozen, including one of my own. On this trip, my friend Pete Werth III scored his second ace on a nifty little par 3 about 135 yards. He thought he hit the ball right and turned his back on the shot as it hit the green and kicked dead left into the hole. I screamed louder and got more excited than he did. Below you can see him removing the ball from the hole. 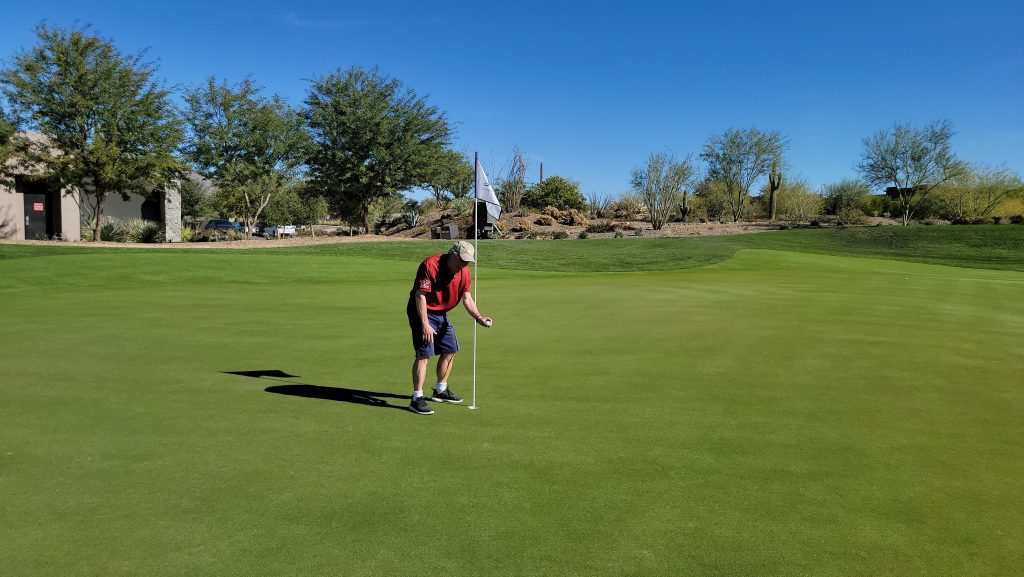 After that another friend, Fenno Follansbee Heath III (Terry) bemoaned his lack of even one ace. Yes, I know both friends are III sticks. I assured him that once we got to the Pebble Beach courses, he would be next. I didn’t really believe it, but what the heck. So, on day one of the tournament with PGA pro and super great guy Jason Gore as our captain, Fenno Follansbee Heath III scored his first ever hole-in-one at The Links at Spanish Bay. A perfectly well struck 8 iron that hit, bounced and rolled right to left into the hole. FFHIII never took his eye off the ball although he was in disbelief when it went in. I screamed and jumped up and down. Terry actually got a stroke on the hole so officially, he made a 1 for 0. 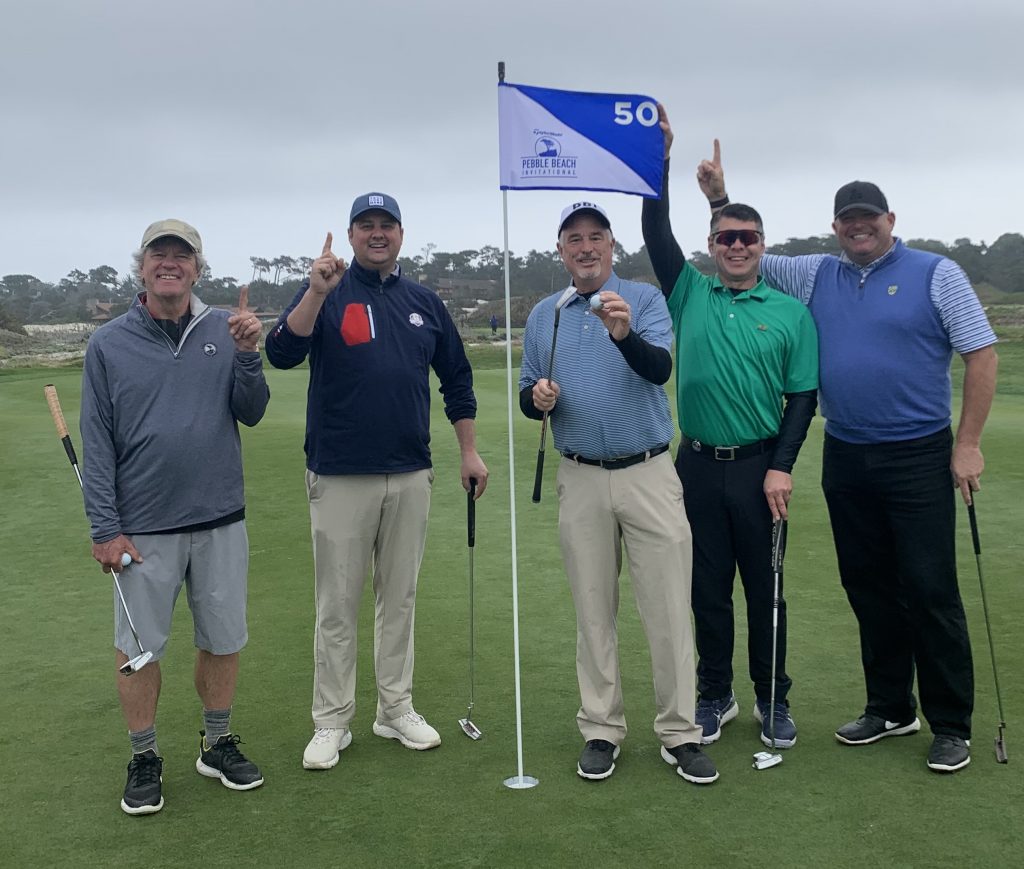 I will share one more pic in this post. Below, we have our foursome plus LPGA legend, multiple major winner and former number one player in the world, Christie Kerr on #9 at Pebble Beach. She is one fiery, intense and competitive golfer, much more so than the other pros who played with us. That’s not bad nor good, just how it was.Everyone is different.

And she can flat out play golf with a very disciplined and methodical process and plan around the course. If I was going into battle, that’s the type of person I want on my team. Off the course, she’s just a regular, good-natured person who likes to have fun. She’s also an entrepreneur with her own winery, Kerr Cellars which we will be using for one of our client wine tastings in 2022.