There has been renewed chatter lately about the U.S. economy being on the verge of recession. It’s not as loud as we (wrongly) heard in 2011, but it’s definitely growing. I vividly remember the Economic Cycle Research Institute doing interviews on CNBC, Fox Business, Bloomberg and just about every major financial website, pounding the table that there was almost 100% chance of recession in 2011 and their indicators were “never” wrong. “Never” is one of those words I don’t typically use when it comes to the markets, economy or politics. How many times did we heard that word as 2008 approached and then during the year?
For the past six years, I have used the same description of our economy. That is, we are seeing the typical post financial crisis recovery. It’s uneven. Sometimes it teases and tantalizes on the upside yet frustrates on the downside. It’s anything but the “normal” recovery from recession which is usually very powerful. Deleveraging, a period of unwinding debt, usually takes 1/3 of the time it took to build up the debt. In this case, it took roughly 30 years to build so 10 years from 2008 puts us at 2018. That should also coincide with a mild recession just before or during.
Returning to normalcy after a financial crisis typically takes two recessions. We already survived a doozy from 2007 – 2009 and the mild recession I already mentioned should be coming this decade. I say “mild” because corporations are sitting on more than $3 trillion in cash and relatively low inventories. Of that, banks have more than $2 trillion in cash. It’s really hard to have a serious economic collapse with banks in such good shape with capital and corporations flush.
Another conventional way to look for recession is to watch the activity of the consumer with their discretionary income. In good times and in bad, we all need to buy groceries, pharmaceuticals and other staples. That’s why they are referred to as defensive. However, in good times, we spend more money on cruises, Disney, resorts, jewelry, clothing, furniture, cars, dining out, etc. For the most part, those are discretionary items.

Consumer discretionary is a major stock market sector and you can usually glean good information about the consumer. It’s really difficult to believe that a recession is close at hand if this sector is at or close to new highs. In 2011, when recession calls were abound, I looked at the chart below and saw a new high for the consumer in June. When the stock market collapsed under the weight of Greece, threat of U.S. default and the S&P downgrade of our debt, the sector went down as expected.

One reason I did not see a recession coming was that it’s very unlikely that the consumer stocks peak and then recession hits within the next few months. Usually, there is much more lead time, like 6+ months, for the consumer to weaken.

In 2001 as you can see below, the consumer sector saw its high a full year before recession hit. That recession, spurred on by the Dot Com bubble bursting and accelerated by 9-11 was brief and generally mild although the multi-year bear market in stocks was severe. 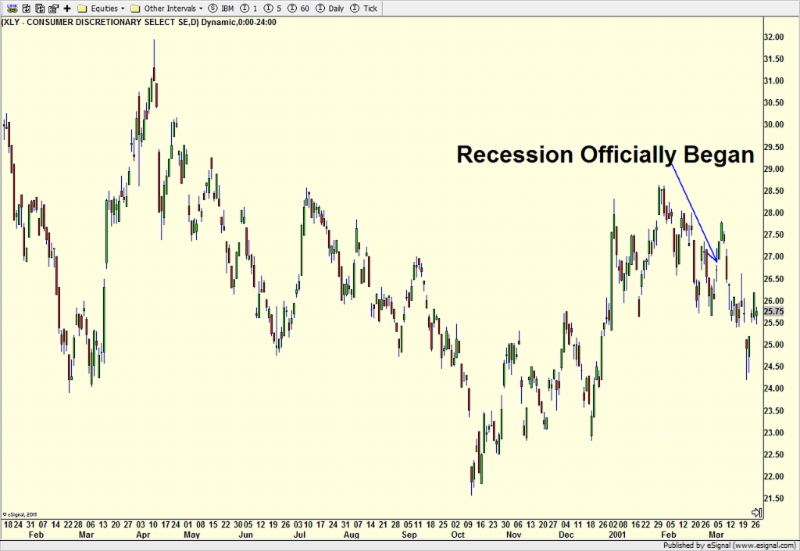 Below you can see the action before the Great Recession hit. The consumer sector peaked in the middle of 2007 and then weakened dramatically to year-end when the recession officially began. I remember living this in real time and I did not believe that recession was hitting late in 2007. I saw weakening, but my original thought was that the dramatic cut in interest rates would stave off recession at that point. I was wrong. 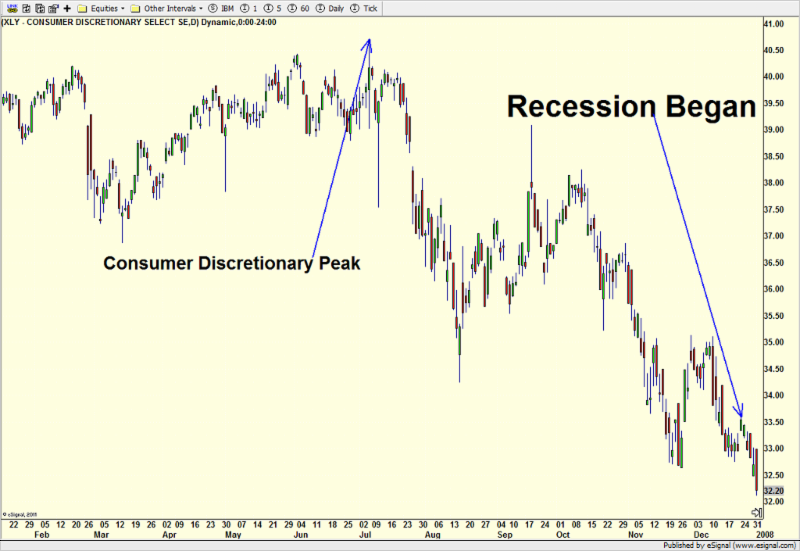 So where is the consumer today?

As you can see below, consumer discretionary saw an all-time high just a few short weeks ago. That makes it very difficult to believe that a recession in the U.S. is in the cards this year. I am not going to use the word “never”, but after you read the next blog, it’s really hard to argue that case. 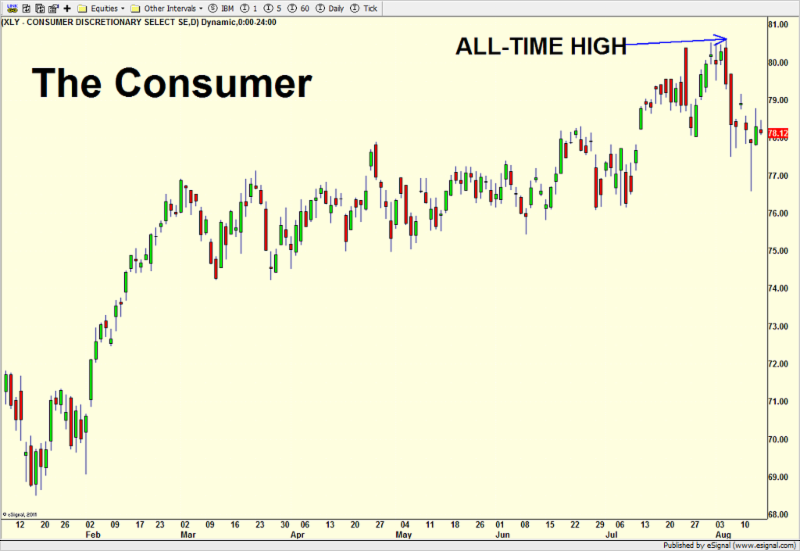