A very long market week is coming to an end. Stocks could not hold on to the rally on Wednesday morning which led to spillover selling on Thursday that accelerated sharply into the close. After a decent morning for the bulls, sellers came in again into lunch on Friday and it looks like the market will need another reversal set up to stem the tide. That could include another ugly morning on Monday or Tuesday, but doesn’t necessarily have to.

Pundits often say that stocks never bottom on a Friday, but that’s false. There are very few “nevers” in investing. The truth is that the stock market rarely sees a low heading into a weekend. I think the number is either 8% or 10% of the time.

The post 9-11 bottom was on a Friday, something I will never, ever forget as I was having my second bachelor party trip of the month and trying to balance the markets with the fun. Waking up to indications of a 600 point (7%) down opening was not what I had in mind when we planned the trip to Kohler Wisconsin!

Anyway, getting back to this week, while volatility has been well within historical norms, it’s so far out of the range we have seen for the past 18 months. That’s why it “feels” so large. And as I have been saying, it should remain volatile for some time, even on the way back up.

During the course of the week, a number of people contacted me with their own market scenarios. I always welcome questions, comments and disagreements. Feel free to call, email, Tweet or Facebook message me. I heard everything from a 20,000 Dow point decline, worse than 2008 with global armageddon to the correction is over and the bull market will continue for years to come. That’s what makes markets. Very differing opinions!

My favorite question came from a reader who asked me, “what if you are wrong, Paul?”

That’s a question I ask myself every single market day although I twist into “how am I going to be wrong?” In other words, what am I missing or assigning too much weight or not enough weight to? With 29 years of battle scars, I have been wrong before and I will be wrong again. It’s okay to be wrong. It’s not okay to stay wrong.

There are a number of ways I could be wrong as with any market forecast. The bull market could have ended, last month. The decline’s magnitude could be much greater. The ensuing rally could be the last.

I am going to table the possibility of the bull market ending until next week when I plan to do a full canaries in the coal mine, which, for newer readers, is my way to lay out the evidence of how bull markets have died in the past. Spoiler alert. The conclusion will be that the bull market is not dead as we haven’t seen the dead canaries. In other words, the footprints of a bear market are not in place.

Could I be wrong on the magnitude of the decline. Well that’s an easy one to answer. Of course! I have always found downside targets to be much more difficult to forecast than upside ones. When the stock market has these vacuums or pockets of illiquidity, the major indices blow through most conventional, common sense levels.

Lastly, what happens if stocks do not see multiple lows, one in February and the final one in March? What happens if stocks just selloff to their ultimate bottom and then reverse sharply to new highs? That’s the scenario I want to discuss now as I  mentioned yesterday on CNBC’s Closing Bell. https://www.cnbc.com/video/2018/02/08/dow-plunges-over-600-points.html?play=1 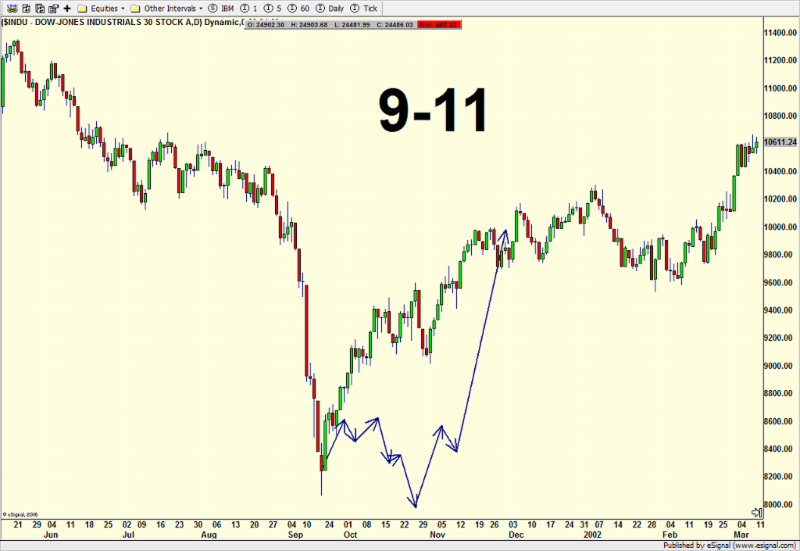 Stocks were already in a bear market when 9-11 occurred and behavioral patterns are very different in bear markets. Market bottoms are simple and don’t build solid foundations, which is why price remains in a bear market. That’s not what we have today. I added my famous blue arrows to show you what good, bull market behavior would have looked like back then and put an end to the bear market.

The other period I found was in the summer of 2007 as shown below. 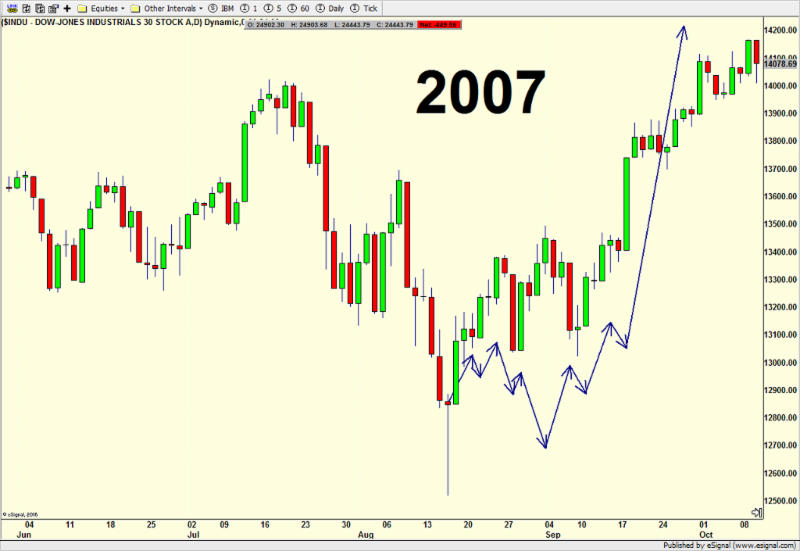 2007 was very interesting as stocks soared to all-time highs in July and corrected 10% into August with outsized volatility. There was a simple bottom on one single day without any backing and filling to build a solid foundation as the blue arrows show. Stocks then roared to all-time highs and the final bull market high in October.

This scenario is certainly possible today although I still rate it as less likely than the one I have been discussing. We will see how things unfold over the coming few months and assess.

Stocks are setting up for another very volatile week next week and I will be in touch as warranted, but you can definitely expect a full canaries in the coal mine.

As always, please don’t hesitate to call or email with any specific questions about your portfolio or financial situation. Investing is a marathon not a sprint and pockets of weakness in the markets will always occur, whichever side of the market you are on.