On Friday the government released the employment report for November which showed 263,000 new jobs being created. That was well above the 200,000 estimated. Unemployment remained steady at 3.7%. We also saw wages increase at 5.1% on an annualized basis. While this is great news for Americans and the economy, it is not what Jay Powell and the Fed wanted to see. Recall that the Fed is on an inflation fighting crusade.

Let’s remember that Fed action takes 6-9 month to makes its way into the economy. So that is more than two full percentage points of rate hikes that haven’t even been felt yet. So much of the economy has significantly slowed, but the jobs market remains tight and strong. And please, please never forget that employment is among the most lagging of all indicators. It’s usually the last domino to topple before recession.

With strong economic news the media and pundits were falling over themselves with conversations of soaring interest rates and plummeting stock prices. Please look at the chart below. First notice that the “soar” in rates barely got above Thursday’s high and nowhere near Wednesday’s. Second, look what yields did after the first 10 minutes following the release. They went lower the entire day. 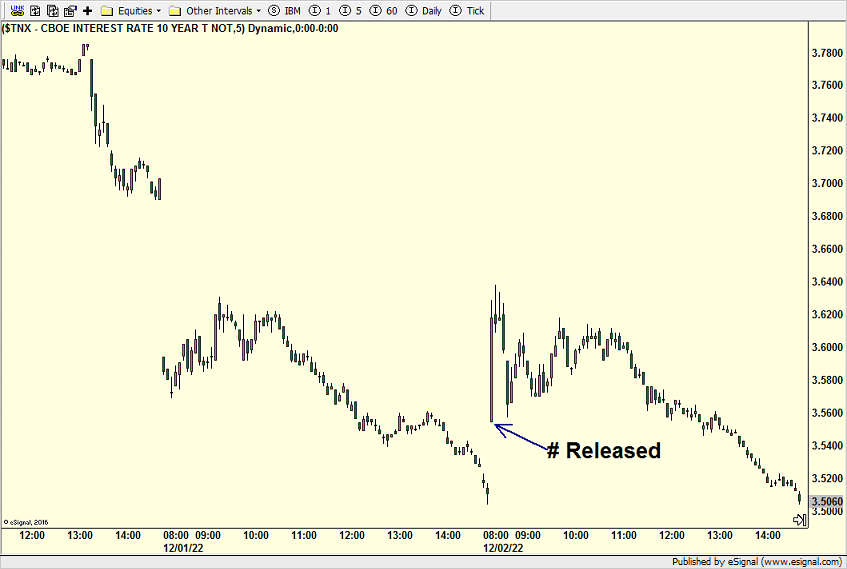 So you tell me. If the jobs market was really white hot and that was going to embolden the Fed, why did rates go down all day? The answer is because the market sees continued economic softening in the quarters ahead. I didn’t use the word recession because the Two-Year isn’t there yet although I do see recession coming in 2023.

On Friday we bought SHV and more KIE.