Yellen Set to Raise Rates, But…

As the Fed’s Open Market Committee meeting heads into day two, our own trends and systems for the trading day are surprisingly mute. Today typically sees stocks trade in a +.50% to -.50% band until 2 pm before the market gets a shot of volatility. Usually, we see a strong upside bias into the close, but the odds of that are under 60% from the usual 75%+. In other words, the edge just isn’t there today. Tomorrow, Friday and early next week are a different story as a trend or two may trigger to signal lower prices ahead.

Turning to the actual meeting and announcement, the Fed is not going to raise interest rates today. That’s the bottom line. We have heard countless speeches from the various Fed Governors and regional presidents on the need to raise rates or wait, but the truth is that unless Chair Janet Yellen wants to hike rates, it’s very hard to believe that her underlings will actually vote against her. That’s akin to mutiny.

With all that said, however, they are absolutely going to offer some of the most hawkish (supporting higher rates) commentary in years to set the table for a December hike, which gets us well passed the election. I find it impossible to believe that Yellen & Co. would ever consider a rate move the week before the biggest election in four years which is when the FOMC meet next.

So expect no move but strong commentary and a hike in December.

What’s wrong with the economy?

Clearly, the economy is no longer in crisis mode and hasn’t been for some time. Since 2009, I have repeatedly stated that the economy is and will remain in a post-financial crisis recovery until the other side of the next recession. That means very uneven growth that sometimes teases and tantalizes on the upside and terrifies once in a while on the downside. It’s very frustrating, more so now because we have complete, total and utter dysfunction in government that makes the Fed the only game in town.

With my view, people have always asked me if I thought a President McCain or Romney would have mattered economically. The short answer is yes because not only would we not have spent almost a trillion dollars on a failed stimulus plan, but ObamaCare would not have been passed. I am not going to argue the social merits of the program, but almost every economist agrees that it has hurt the economy to some degree. I believe significantly.

Additionally, our tax code is another hot mess that has hurt the economy and the regulation pendulum has swung not back to neutral, but all the way to the other side. We’re not creating businesses. We have severely hindered the entrepreneurial spirit which has always helped kick start the economy after recession. I think a GOP president would have had different results, but wouldn’t have been able to sidestep the full effects of the post-financial crisis recovery.

Should the Fed raise interest rates?

Long-time readers know that I am record since 2008 that the Fed should NOT raise rates until the other side of the mild recession that will follow the Great Recession. The world is a dramatically different place post-financial crisis and we are seeing some of things I was very concerned about start and continue to proliferate, like negative interest rates in Europe and Japan. I do believe that Yellen & Co. will hike rates in December which is absolutely the wrong move.

Against the problems abroad, we have seen more of the uneven growth I mentioned already. One month (May), the employment report is recessionary and the next two months it’s hot and higher rate supportive. GDP still behaves like it’s stuck in quicksand and inflation remains below the Fed’s 2% target.

What concerns the smart people?

As I mentioned several times before, I believe the real reason that Yellen and the smart folks in the room are so scared to raise rates is that it would set in motion something I have been discussing since 2008. That is a tech-like blow off in the dollar only seen during the mid 1980s when globalization was only a fraction of what it is today. You can see this on the left side of the long-term chart below.

Fed officials rarely discuss currencies, but I believe this is something done a lot behind closed doors. Should the dollar take off above 100, which I think is a lock, 110, 120 and even higher become likely and possible. A shorter-term chart is below where you can see the big rally in 2014 and 2015 followed by an 18 month consolidation so far. Once the dollar breaks out to new highs and stays there for a few weeks, 100 or so will become the floor. 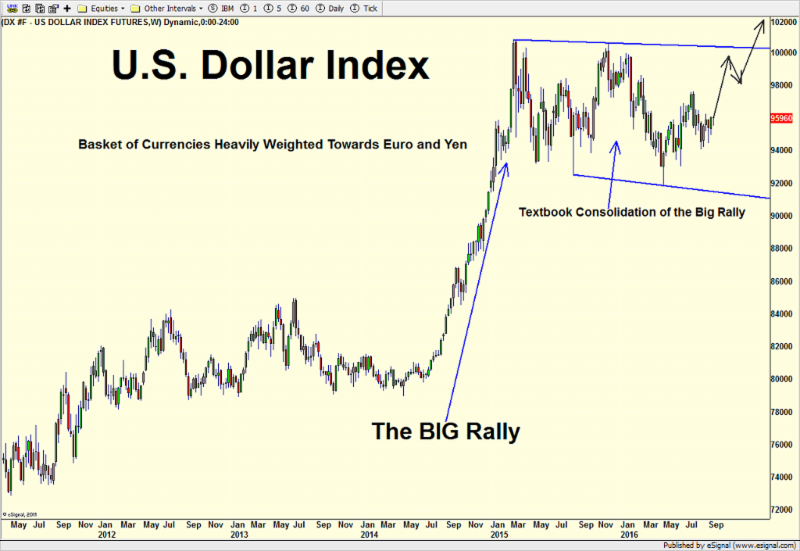 Most of you are probably thinking “so what”. Stronger dollar should equal a higher standard of living. How bad could a strong dollar be? That is true. However, there are all kinds of chain reactions to understand.

A surging dollar would mean a collapsing euro, yen and pound. Along with my long-term dollar and Dow forecasts, I also have predicted the euro to parity against the dollar on its way to sub 80. The pound looks like it will see the 90s with the yen eventually declining another 25-50% from here.

With those central banks easing and/or accommodative, how could they fight back? While exports would benefit, their standard of living would further suffer. Much more importantly, I believe we would see massive capital outflows from much of the world into the U.S. First, this would manifest itself in short-term treasuries. I then believe money would flow into large and mega cap blue chip stocks along with real estate. That would make my longstanding target of Dow 20,000 seem bearish. I wouldn’t rule out 25,000 or even higher under that scenario.

While a stock market melt up would be enjoyed for a time, these massive capital flows and currency collapses would likely lead to historic market dislocations around the globe ending worse than the crash of 1987. In other words, it’s all good until it’s not and then look out as the elephants all try to exit the room at once.

As I end this piece, I need to take my usual shot at Fed Governor Lael Brainard who has blatantly and publicly embarrassed the Fed’s supposed political independence by contributing to Hillary Clinton three times. Everyone knows the two are buddies, but did it have to publicly pollute the Fed like that? Will anyone be surprised when Brainard is chosen to succeed Jack Lew at Treasury or Yellen at the Fed?!?!

A full Street$marts with canaries in the coal mine are due out next week. As I write about all the time on www.investfortomorrowblog.com, I care much more about the markets’ reaction to the news over what the news actually is. Keep a close eye on what leads and lags from 2:30 to 4 pm today.