Last week, I listed a number of reasons why the stock market was on a solid foundation. Today, I want to counter that and offer concerns on the sentiment side of the equation. Remember, in the past two updates I described a tug o’ war or dichotomy.

Below is a chart which shows the weekly bull/bear poll from the American Association of Individual Investors. Last week you can see in green there were more than 50% bulls while the bear number fell to almost 20%. That shows investors getting a little too giddy about the prospects for stocks. 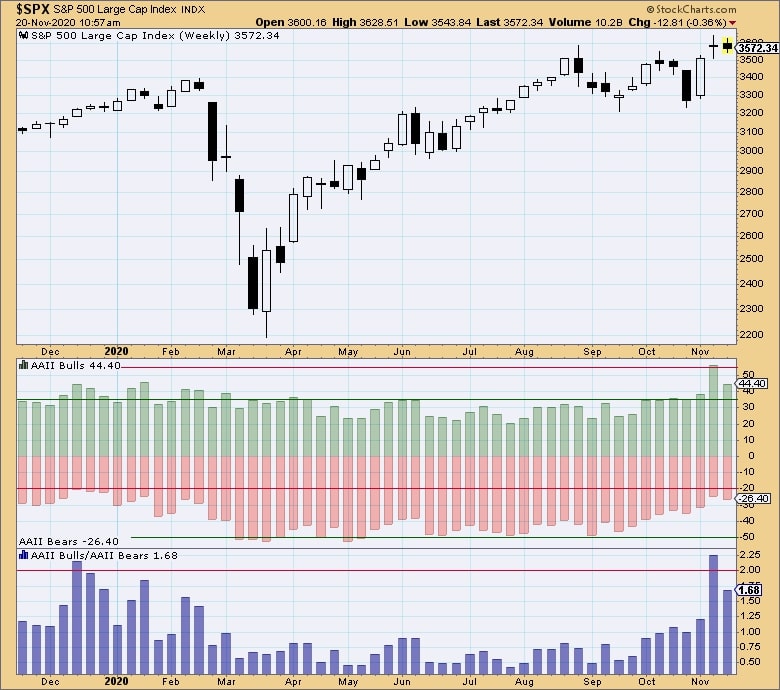 Additionally, we saw an historic amount of money flow into equities two weeks ago. It was surprising enough to just see positive flows since we mostly watch money go out of stocks and into bonds. However, what we saw two weeks was a torrent of money in. And over the weekend, I saw The Market Ear report that there was an all-time record amount of money flowing into global equities last week. Clearly, investors are now more worried about missing out.

Finally, retail options traders have had a very positive outlook for stocks over the short-term, to the point of being on the extreme side. These traders usually trade a small amount of contracts and their track record of being correct is poor.

One caveat about sentiment gauges. They can be early or very early. They are never late. Overbought can become confident. That can lead to giddy and then outright greed as we saw in early 2018 and late 2019. With the market’s foundation being so strong and sentiment getting a little giddy, we will see how it all plays out. The odds favor a short-term pullback over the coming weeks, but nothing significant. Until proven otherwise, weakness is a buying opportunity. Should all five major stock market indices close at fresh highs, we could see a mini-melt up into year-end.