Yesterday, I wrote about the little pullback in stocks. That was before Fed head Lael Brainard threw a big bucket of cold water on the markets. Brainard is usually in the dovish camp and was often mentioned as a replacement for Jay Powell if the liberals had their way with President Biden. Recall, she was widely considered as the front runner for Secretary of the Treasury if Hillary Clinton won in 2016. She’s certainly no hawk when it comes to monetary policy.

If you missed her warning shot, Brainard stated that the Fed would unleash a series of interest rates hikes. It certainly looks to me as though they are going to raise by 1/2% in May. Additionally, she stated what the whole world already knew. The Fed would also consider, discuss and implement asset sales off its massive and unfathomable $9 trillion balance sheet. If her timing wasn’t so pathetically off, it would be laughable.

In almost one fell swoop Lael Brainard went from Janet Yellen to Paul Volcker. That’s not the way Fed Governors are supposed to behave. What happened to being “data dependent”? Instead, she is data panicking. In what has become a steady decline in the prowess of the Fed, there now exists a crisis in confidence. What the heck is going on there?

In August 2020 I started to sound the warning that the inflation genie was out of the bottle and she wasn’t going back in. Our global macro model started buying commodities which was a real sign. I was far from the only one and many people who manage money professionally concluded the same thing. I never claimed to be as brilliant (or even brilliant for that matter) as those academics on the Fed, but I also never ignore market messages which typically lead economic data by many months.

None of this is rocket science. As I have said since Q3 2020, the Fed should have started gently tapering in 2020, paused at completion and then start raising short-term interest rates during the second half of 2021. That long runway would have given the markets enough time to digest and accept. Instead, the Fed is doing a Chinese fire drill, losing the confidence of the public and causing ripple effects throughout the global financial system.

You bet I am annoyed. It should have never happened this way.

When I began forecasting a Q1 stock market decline last year, I was firm and crystal clear about the catalyst. When Russia invaded Ukraine, I reaffirmed my call that the decline was 80% Fed driven and 20% everything else. I said it on Yahoo Finance. I said on TD Ameritrade Network. I said it on Fox Business. I wrote about it endlessly here.

The stock market had a beautiful run off the February and March lows and suckered in countless investors when the S&P 500 and other indices closed above their February bounce highs last week. 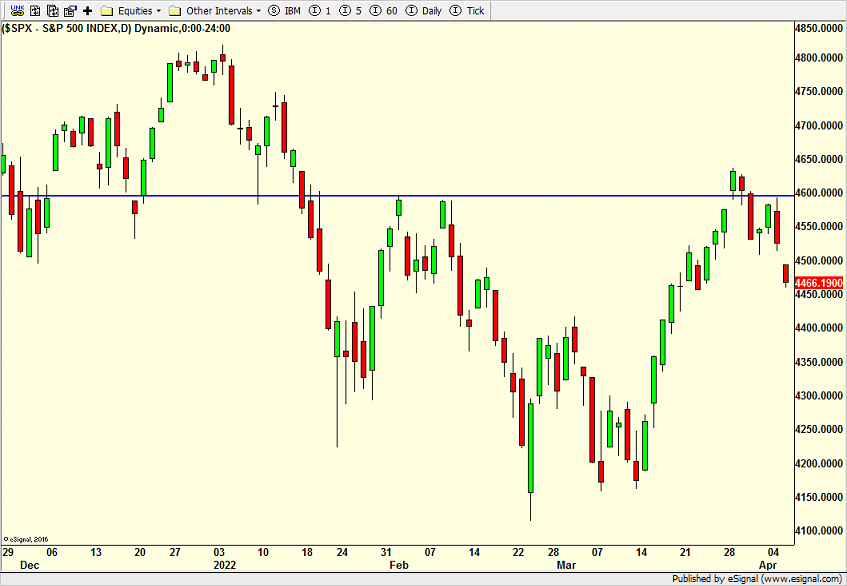 Given the strength of the rally, it should not be over now and I continue to believe the lows are in for the next few months. The market should continue with my overall 2022 theme of choppiness, buying weakness and selling strength. I have often shared the 2018 and 1994 years as nice analogs for 2022. I continue in that camp, but lean towards 1994 over 2018.

This pullback should also be viewed as one to determine future leadership after the initial bounce was led by what was hit hardest during the correction. On March 7th, I offered that crude oil was showing the seeds of the peak. That has been the high for crude so far. I fear that energy stocks are the new place to hide for investors which will ultimately end up in ruin. That sector needs to be shaken to remove the weak handed owners.

Another one of my main themes for 2022 was economic slowdown but not recession, again, similar to 1994 and 2018. I am standing by that. Of late, you can see that in a number of equity sectors. However, three of my key sectors, banks, transport and semis are not behaving well at all right now. Couple that with high yield bonds lagging and there are reasons for concern. Again, 2022 is a challenging year that requires patience and quality. Both bulls and bears will be frustrated and that should lead to an explosive move higher to 40,000 in 2023, assuming no recession.

On Tuesday we sold PCY, EMB and SSO. On Wednesday we bought DE, more biotech. We sold DIG, SARK and some EIDO and HYG.